The blog received several comments about the relative energy use of electric aircraft, and how NASA and the CAFE Foundation might have overstated the efficiency and low emissions for the electric aircraft in the competition.

Steven Crow added this objection.  “Even after reading the relevant pdf’s, it is far from clear to me how CAFE computed ‘mileage’ for the electric aircraft. The right way of doing it is clear enough: base the mileage on the fossil fuel used to charge the batteries.  Electric motors and batteries are not subject to Carnot efficiency limitations.  They can seem to be nearly 100-percent efficient until one looks at the power source that charged the batteries. That objection would disappear if CAFE used solar power to charge the batteries, but the rules appear to require diesel generators.”

Alan Soule, a CAFE board member and Charging Master for the event, drives a Tesla roadster which he will soon charge through solar panels on his house’s roof – making him a very green motorist. 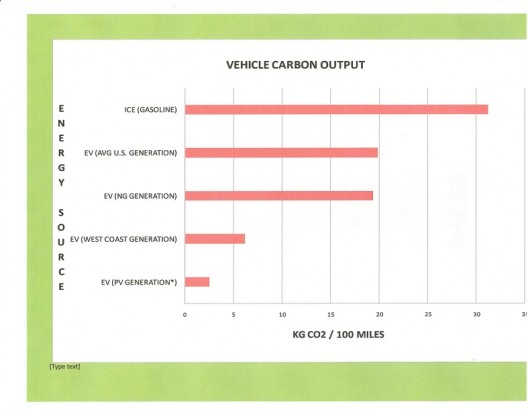 He says the following about the chart shown here.  “I have used the attached chart for talks that I have given on EV’s.  People just assumed that all power generation uses coal. Actually, about 50 percent of the electricity generated in the U.S. is from coal.  California only has a few coal-fired plants and a relatively large proportion of renewable energy sources. Thus, in California, when you consider that the electric motors are around 90 percent efficient and the batteries store about 85 percent of the power that is input to the charger, the carbon ‘footprint’ of an electric vehicle is considerably less than [that of] an IC vehicle. 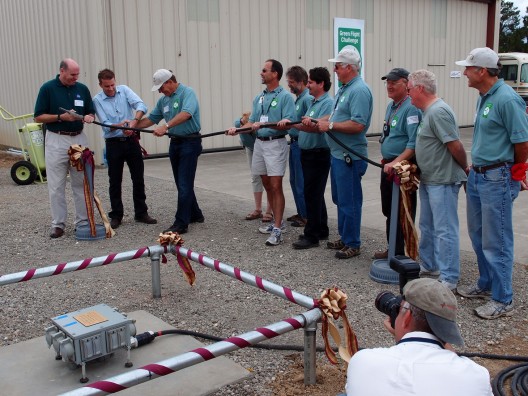 CAFE’s electric charging stations, the first in any U. S. airport, provide six outlets for as many aircraft, and are supplied with clean power from geothermal sites near Geyser Peak, one of the turnpoints on  the Green Flight Challenge course.  There was no need, in this case, for a coal/natural gas, or Diesel conversion and GFC challengers flew on a near-pristine source of power.

Otherwise, yes – there is work to be done to make even EVs cleaner and less dependent on carbon-based power sources.  We all share the responsibility to make this part of a better future.