This year’s Icarus Cup, a human-powered flight competition, was held at Sywell Aerodrome, about 75 miles and nearly two hours north of London. 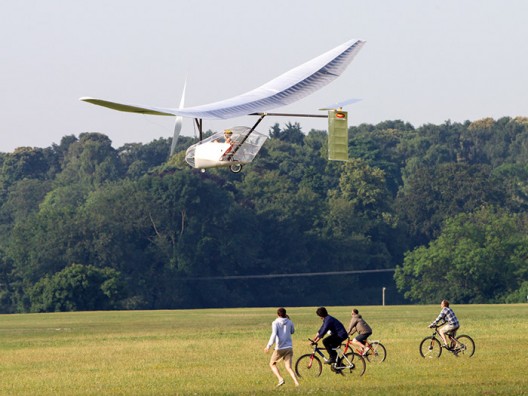 “One of the Human Powered Aircraft Group’s objectives is to promote human powered flight as a sport and encourage wider participation, perhaps one day appearing at the Olympics. The idea of the Icarus Cup was conceived as a way to inspire more people to design, build and fly aircraft themselves and provide an environment for them to meet, compete and share knowledge.”

At opposite ends of the performance spectrum from this normal labors, David Barford’s Betterfly took eight years and £8,000 ($12,300)  to build and had a first test flight of just 18 seconds, much to Barford’s delight.  His automotive work takes place at the Mercedes High-Performance Engines factory in Brixworth, “Working on engines for Formula 1 drivers including Jenson Button and Michael Schumacher.”

When Betterfly took off from Sywell in late June, it became the first ever man-powered aircraft to take to the skies from that airport.  It went on to win the Icarus Cup competition, showing overall performance above and beyond the other competitors.  It also won the overall contest.

One would never think of HPAs as being short takeoff and landing vehicles, but Robin Kraike performed an unassisted take off from standing position within 12.2 meters (39 feet), 12.7 meters (40.6 feet) better than last year’s best takeoff distance.

David Barford attempted the Triangular Course task for the first time, and completed two sides while performing angled turns.  Such turns are one of the most hazardous to the aircraft, since the lower wing in a bank can drag on the ground at such low altitudes.  There is a large prize for the first person to fly the 500-meter (1,600 feet) triangle in clockwise and counterclockwise directions within 15 minutes.

Southampton University’s SUPHA with boom-mounted propeller, clean fairings to keep the wind out of the pilot’s face

Other teams from Bath University, Southampton University and a private team called EA12, led by designer of the Optica, John Edgley FRAeS (Fellow in the Royal Aeronautical Society), also took part in the competition.

For more information about the 2013 Icarus Cup visit the Royal Society’s site or view some of the video of flights on the Royal Aeronautical Society YouTube Channel.

Both the Society and your editor look forward to more sporting events such as this.  The next will be in 2015.  What might excite even more interest is a competition involving electrically-assisted HPAs, much like pedelecs or motorized bicycles, helping to make cross-country flights in pedaled airplanes a possibility.   Rules would have to be carefully worked out, but such a competition would certainly garner public attention.