Frédéric Laude reports on the Flying Electron blog about his recent flight in the CC01e, a small canard aircraft designed by Claude Chudzik 30 years ago and pulled from storage to see if it could benefit from electric power.

After a first, one-lap-around-the-field flight on March 23, Frédéric made a second flight of 15 minutes the following day.  On landing, the team found that the batteries still had 60-percent of their full charge remaining.  The airplane was stable and easy to fly, despite the presence of a big helicopter that seemed to insist on making the circuits with the petite canard. 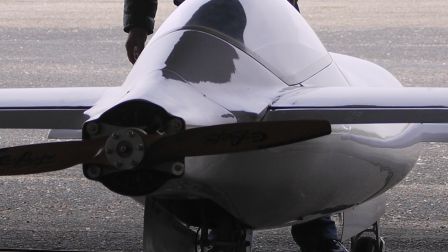 Problems with the in-line landing gear persisted, though, and the team spent the next several weeks modifying a nose gear that needed strengthening.  They replaced a weak aluminum piece with titanium and made changes to the retraction mechanism.

On the airplane’s third flight April 13, Frédéric  noted, “We still had a little problem with that damn front,” referring to the cables that lower and retract the nose gear.  The fact that the cables have been on the plane since its construction might have had something to do with the ensuing touchdown where the nose rubbed the ground.   The minor dustup might have been amplified by the pilot’s taildragger reflexes – he flies an RV-7 – in raising the nose for the landing,  apparently enough to cause the canard to drop and stress the nose gear “a little more than you should.”  Laude brushes the consequences  aside.  “…So we had to redo a little resin, but really nothing serious. Sanding tomorrow and there will be nothing.” 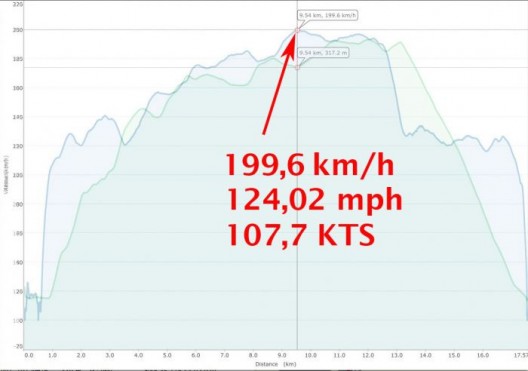 He is highly satisfied with almost exceeding 200 kilometers per hour, hitting “199.6 km / h with a notch of flap” and “about 200 amps on the meter.”  The team has ambitions of doing 300 kilometers per hour (186 mph) with the little airplane, which would give them a craft closing in on Chip Yates’ record (also in a canard) using only a fifth of the power.