Would you believe that there were once at least two rubber-band powered airplanes intended to carry people?  The Rubber Bandit and the RB-1 were attempts at truly flexible flight in the 1980s and ‘90s, and each elicited a brief kerfuffle in the press.

Rubber Bandit was a well-designed effort to cruise the length of a runway on the thrust provided by twisted rubber bands.  Its motive power was cranked by a pickup-mounted winch that put hundreds of turns on the model-airplane-like craft’s motive source. 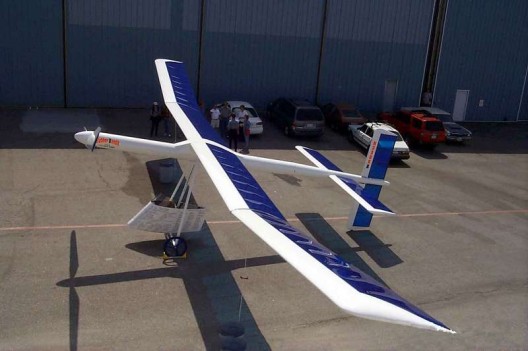 Dave Barry was taken by the concept, and interviewed George Heaven, the plane’s designer in an August 3, 1997 column titled, “The Rubber Band Man.”  He talked about Stuff that Guys do, such as dropping bowling balls from airplanes on junked cars.  He explained that Guys, hearing about such things, responded with, “Cool!”  Women tended to say, “Why?”  Barry noted that, “Because guys like to do stuff… this explains both the Space Shuttle and mailbox vandalism.”

Barry’s column went on in typical Barry style and even managed to capture technical detail.  “Today I want to report on another inspiring example of guys doing stuff.  There is a guy in Van Nuys (rhymes with `guys’), Calif., who is planning, one day soon, to roll down an airport runway and become the first human in recorded history to take off in an airplane that is powered by a rubber band.

“I am not making this up. I have met this guy, a 44-year-old stunt pilot whose name happens to be George Heaven. I have also seen his plane, which he designed, and which is called the Rubber Bandit. Do you remember the little rubber-band planes that you used to assemble from pieces of balsa? This plane looks a lot like those, except that it’s 33 feet long, with a wingspan of 71 feet and an 18-foot-long propeller.  The body is made from high-tech, super-lightweight carbon fiber, so it weighs only 220 pounds without the rubber band, which weighs 90 pounds.  “This is not your ordinary rubber band such as you would steal from the supply cabinet at your office. This is made from a continuous strand of rubber that is a quarter-inch wide and 3- ½ miles long; if you stretched it out, it would extend for 24 miles, which means that — to put this in scientific terms — if you shot it at somebody, it would sting like a mother.

“The rubber band has been folded back over itself 400 times, so now it forms a fat, 25-foot-long, python-like rubber snake on the hangar floor at the Van Nuys Airport. When the big day comes, a winch will wind the rubber band 600 to 800 times, and everybody involved will be very, very careful.  You have to watch your step when dealing with your large-caliber rubber bands. I know this from personal experience, because one time a friend of mine named Bill Rose, who is a professional editor at The Miami Herald and who likes to shoot rubber bands at people, took time out from his busy journalism schedule to construct what he called the Nuclear Rubber Band, which was 300 rubber bands attached together end-to-end.

“One morning in The Miami Herald newsroom, I helped Bill test-fire the Nuclear Rubber Band. I hooked one end over my thumb, and Bill stretched the other end back, back, back, maybe 75 feet. Then he let go. It was an amazing sight to see this whizzing, blurred blob come hurtling through the air, passing me at a high rate of speed and then shooting wayyyy across the room, where it scored a direct bull’s-eye hit smack dab on a fairly personal region of a professional reporter named Jane.

“Jane, if you’re reading this, let me just say, by way of sincere personal apology, that it was Bill’s fault.”

Barry concluded his interview by telling Heaven he was out of his mind, and warning readers in the vicinity of Van Nuys Airport to duck if they heard a loud twang.

Even People Magazine was curious enough to ask George about his $185,000 conveyance.  “Does his technology have any, er, practical application? ‘Not unless,’ he says, ‘the world runs out of fuel.’”

The project, unfortunately, ran out of fuel before success was achieved, even though flight attempts and some reported short hops were made until 2003.  One wingless run sounded fairly intense, with helpers having to grab the plane when the propeller stopped turning because, to save weight, the craft had no brakes.

Perhaps the epitome of great expectations or the sign of an overweening bureaucracy, the airplane was assigned “N” number N330RB and a transponder code.

Over 10 years before, the RB-1 was the first rubber-band powered airplane to carry a person.  Dave Loveman of Lightsportaircraft.com reported on its display at Oshkosh in 1988, noting the following specifications:
Loveman reported, “I first saw the RB-1 at AirVenture in the ultralight area, about 1988.  While I was able to grab some video of it on static display, I missed the one and only flight that it did covering nearly 300 feet.  (Editor’s Note: A comment on the video claimed RB-1 managed 1,400 feet.)  It was a project taken on by one of the local EAA chapters.

“It basically used a lightened up Lazair fuselage, with the rubber band running down through the [lengthened] center boom tube.  It was direct drive spinning a very long two-blade foam composite propeller.”

The airplane was reportedly designed by Mark Lokken.

Both airplanes show extreme approaches to achieving green flight, with perhaps a bit more daring than most because of the high level of potential energy stored in the coiled rubber bands just waiting to snap on that one extra turn of the winder.