A recent entry comparing the German Carplane® and Burt Rutan’s BiPod has prompted a response from John Brown, who found the posting of concern for the misapprehensions it might cause in readers.

He notes, for instance, “Your current article portrays us as a large Govt. Co. (we got a small subsidy) going up against a ‘charity’ organization (Northrop-Grumman’s subsidiary, Scaled Composites) in whose name the BiPod is registered at the FAA – as a glider;

“It compares us to 1930s modular concepts where actually the BiPod’s wings are screw-on/screw-off ‘modular’ and use that older concept; 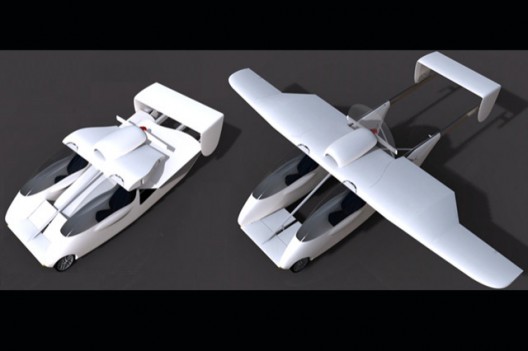 “It attributes a commuter ‘pitch’ to us where, in fact, we’re not aiming for that market at all. [Thanks for your apology. However, the world is still quoting your article.]

“It implies we somehow responded to Burt Rutan (we disclosed 2008 – via patent).

“Our LSA speed limit and honest numbers are portrayed as inferior performance (rather than questioning why Scaled Composites would claim an LSA could go 200mph).”  (Editor’s note: the first blog entry on BiPod did question where that speed would come from with the limited power sources described. That would imply a flat plate drag area at least as good as Mike Arnold’s AR-5, a lighter single-seater which managed 213 mph on 65 horsepower.)

“It calls aspects of our powerplant concept into question – misunderstandings we subsequently cleared up. [But again, the world is still quoting your original article]”

Seeking enlightenment rather than controversy, we present highlights from Brown’s visual comparison of BiPod to Carplane and his detailed critique.  If Terrafugia wishes to provide a similar comparison, we would be delighted to present it to our readers.  If Burt Rutan wants to provide his insights, we would be equally delighted.

Carplane’s web site provides the full .pdf of the comparison, and gives an introduction to some design considerations and constraints that would seem to apply to almost any roadable airplane or flyable car.

Brown compares, for instance, the highly automated extension and retraction of Carplane with the manual assembly and disassembly required for the transitions between ground/air/ground modes on BiPod.  This takes about 15 seconds of automated transition for the Carplane, and about 10 minutes of labor that should be familiar to any sailplane pilot on the BiPod.

A driver/pilot can stay in the same seat during the transition in the Carplane: The BiPod is driven from one cockpit and driven from another.  Pilot and passenger will have to swap places following a mode change.  Convenience is certainly on Carplane’s side here, although the driver/pilot willing to pull wings and tail feathers and stow them will probably be unfazed by stepping over the side of a sailplane-like cockpit for entry. 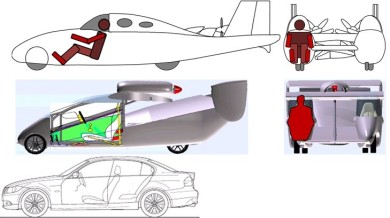 One of several images provided by Carplane - unverified as to scale

Brown claims superior airflow over the Carplane in driving configuration, surmising problems with the BiPod’s forward-facing wing roots in their stowed position and a possible lack of downforce  compared to Carplane.

He notes that longitudinal weight distribution, lack of flaps on BiPod and placement of wheels on the two vehicles would lead to better takeoff and landing characteristics for Carplane, although BiPod has “flown” with “wheel-powered runway hops (‘wheelies’)” with one person on board.

Brown also looks at elevator size and area for necessary rotational force to allow takeoff, and thinks propeller placement on BiPod’s stabilizer might restrict that action.

Where Carplane is designed to fit in a single car garage, BiPod is unable to be fully sheltered.  Other configuration issues give the Carplane an apparent edge in crosswind landings.

Brown clearly has an advantage in the consumer market with the cockpit and motive power “transparency” of operation.  Rutan’s pilots and passengers might feel a bit cramped, according to Brown, with battery packs in front of them and motorcycle engines behind them in both cockpits.  If nothing else, Carplane has more elbow room.  Brown also notes the apparent current lack of cooling for BiPod’s power sources, while Carplane has a liquid-cooled ground power system and liquid/air cooling for its high-mounted aerial engine.  However, we can only assume that Rutan and his engineers would address this issue in further development.

Although both roadable aircraft (or flyable autos) are similar in their catamaran-like layouts, their design philosophies and structural approaches are extremely divergent.  The full critique, from Carplane’s point of view, can be found on the company’s web site.

A complex, sophisticated craft such as Carplane would require a lengthy development process, and it has been in creation since late 2007, with a patent application filed on July 28, 2008.  BiPod was
reputedly a four-month effort as a proof-of-concept vehicle for some of Rutan’s theories and ideas.  Few such POCs retain all their bugs or features by the time they reach a consumer, so we would expect changes over an additional development cycle.

Obviously, Carplane is intended for a high-end market, not unlike Terrafugia’s Transition.  Enough AirVenture attendees crowded Rutan’s presentation on BiPod to show an intense interest in the possibility of a humbler, labor-intensive vehicle, though, that one can certainly envision homebuilt aviation enthusiasts who are already dreaming of how they can improve on Rutan’s original.

Thanks to John Brown for retaining a sense of humor and the willingness to advocate for his firm’s machine. We invite other qualified parties to share their well-documented and illustrated viewpoints.  All viewpoints are welcome.