Alpaero, a small firm in the southern French alps (hence its name?) created an ultralight sailplane/motorglider about 10 years ago that was originally powered by a two-stroke engine.  Recently, though, it’s gone green with a four-stroke, Briggs & Stratton engine and even greener with an electric motor version. 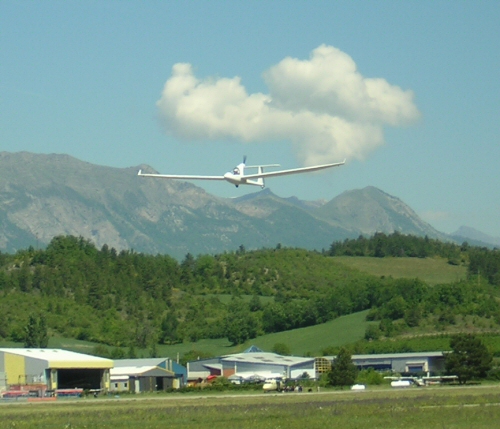 Claude Noin, the designer, wanted to answer the request for a “light autonomous sailplane at a reasonable cost,” able to meet ULM (ultralight) qualifications.  The fixed engine behind the cockpit configuration avoids the complexity of the retractable engine configuration, which Alpaero says can increase drag two or even three times over that of the “clean” sailplane when the engine or motor is extended.  As Dick Van Grunsven has pointed out, the need for motor extension usually occurs at some low point in the flight, when other options have been exhausted.   Even the clean design of his Antares motor system produces a noticeable drop in gliding performance, he notes.

The large cockpit has a very upright seating position, leading to excellent visibility.  The sailplane’s steerable tail wheel allows the pilot to maneuver without a ground crew to walk the wings.  The light weight of components also allows single-person assembly and disassembly, adding to the independent qualities of the machine.

The direct-drive B&S version cranks out 28 horsepower, gives “very few vibrations,” is easy to maintain, and consumes a mere four liters (1.06 U. S. gallons) of fuel per hour swinging its 1.2 meter (3.94 foot) folding propeller.  Claude Noin is considering mounting a propeller speed reduction drive to allow a bigger, slower turning propeller, reduce noise, improve rate of climb, and refine the aerodynamic shape of the canopy/engine juncture.  To accommodate the added weight of the two-cylinder engine over that of Excel’s original small two-stroke, the fuselage was recrafted in carbon fiber over 90 percent of its surface.  The large four-stroke aircraft has a weight equivalent to the original’s, which carried a much smaller, lighter engine. 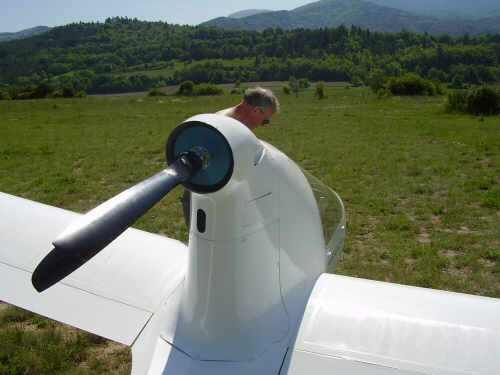 Optional wing extensions can stretch the original 13.74 meter (45.07 feet) span to 14.80 meters (48.56 feet) and are projected to add 2.5 points to the lift-drag ratio, reputed to be in the 30:1 range, or comparable to a KA-6 (one of the best vintage all-wood designs) according to Alpaero.  The wing  features a recently developed laminar airfoil, aiding the performance of the small machine.

An electric version, the Exelec, was developed during late 2010 through early 2011 and accomplished its first flight in May.  An Eck/Geiger HP-13.5 (kW rating) weighs only 5.2 kilograms (12.32 pounds) with its controller and swings a 1.6 meter folding propeller developed specifically for the motor.

Arranged in two packs, 48 kilograms of lithium-iron phosphate batteries make up for the light-weight motor, and along with a ballistic parachute, raise the total empty weight of Exelec to 225 kilograms (495 pounds), close to that of the B&S powered version.  Alpaero notes the batteries’ energy density
disadvantage compared to lithium ion or lithium polymer cells normally used, but accepts the weight penalty because they are less expensive and safer in use.  With this equipment, Exelec takes off in 150 meters, has a rate of climb of about 2 meters per second, and can gain 1,000 meters (3,200 feet) of altitude.   This doesn’t match the 3,000 meters climb ability of the Antares, but the airplane is significantly less expensive. 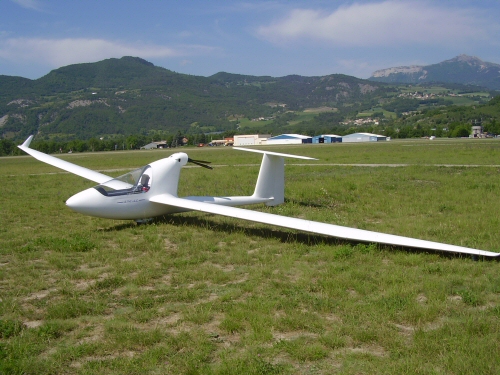 Because they can extend their range through soaring flight, ultralight sailplanes offer an attractive approach to taking advantage of the lightweight, high torque motors currently available, and offset the disadvantages of battery weight by needing fewer cells to accomplish their mission.  Exel is certainly an excellent example of what can be accomplished in this flight realm.