A new “yolk-and-shell” nanoparticle could boost the capacity and power of lithium-ion batteries. 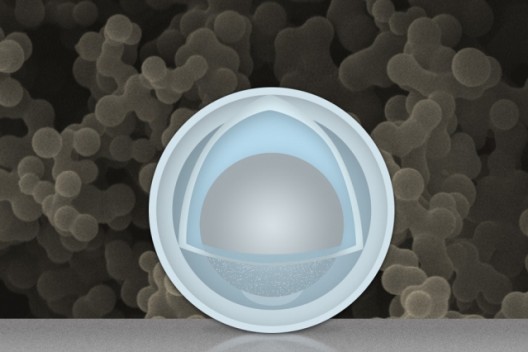 The gray sphere at center represents an aluminum nanoparticle, forming the “yolk.”  The outer light-blue layer represents a solid shell of titanium dioxide, and the space between the yolk and shell allows the yolk to expand and contract without damaging the shell.  The background image is an actual scanning electron microscope image of a collection of these yolk-shell nanoparticles.  Image: Christine Daniloff/MIT

MIT’s press release gives a graphic overview of what damages electrodes and shortens battery life.  “One big problem faced by electrodes in rechargeable batteries, as they go through repeated cycles of charging and discharging, is that they must expand and shrink during each cycle — sometimes doubling in volume, and then shrinking back. This can lead to repeated shedding and reformation of its “skin” layer that consumes lithium irreversibly, degrading the battery’s performance over time.”

Dr. Yi Cui and teams at  Stanford’s National Accelerator Laboratory (Formerly the Stanford Linear Accelerator Center), and the Environmental Molecular Sciences Laboratory (EMSL) at Pacific Northwest National Laboratory all published papers on a similar  joint accomplishment three years ago, as reported in this blog.  Dr. Cui had studied several alternative ways to reduce the effects of expansion and contraction on electrodes.

According to an MIT news release, “Now a team of researchers at MIT, led by Professor Ju Li, and Tsinghua University in China has found a novel way around that problem: creating an electrode made of nanoparticles with a solid shell, and a ‘yolk’ inside that can change size again and again without affecting the shell. The innovation could drastically improve cycle life, the team says, and provide a dramatic boost in the battery’s capacity and power.”

Dr. Cui and his teams used “commercially available single silicon nanoparticles in ‘conformal, thin, self-supporting carbon shells, with rationally-designed void space between the particles and the shell.’”  MIT and Tsinghua University use a titanium dioxide shell and an aluminum yolk, which they say has proven to be “the high-rate champion among high-capacity anodes.”

The MIT researchers explain that most lithium-ion batteries have graphite anodes with a storage capacity of 0.35 ampere-hours per gram (Ah/g).  Looking at alternatives, lithium metal can store about 10 times as much energy per gram, but, according to the researchers, is extremely dangerous, short-circuiting and catching fire on occasion.  Silicon and tin have very high capacity, which drops at high charging and discharging rates.

Aluminum is a low-cost option with theoretical capacity of 2 Ah/g, roughly six times that of carbon.  But Li found much the same thing Cui did with silicon, it expands considerably when charged to high capacity, and absorb lithium, then shrink when discharging and releasing lithium.

Repeated expansion/contraction cycles cause mechanical stress, and break down the electrodes.  Complicating things further, liquid electrolyte in contact with aluminum decomposes and forms a solid-electrolyte interphase (SEI) layer around the Al, which sheds particles when charged and discharged.  This has caused previous attempts to use aluminum in Li-ion batteries to fail.

Professor Li explains there is a “big difference between what are called ‘core-shell’ and ‘yolk-shell’ nanoparticles. The former have a shell that is bonded directly to the core, but yolk-shell particles feature a void between the two – equivalent to where the white of an egg would be. As a result, the ‘yolk’ material can expand and contract freely, with little effect on the dimensions and stability of the ‘shell.’”

MIT’s titanium oxide shell separates the aluminum from the liquid electrolyte, and does not expand or contract much, stabilizing the SEI layer and protecting the aluminum inside from direct contact with the electrolyte.  This was an unplanned outcome.

“We came up with the method serendipitously, it was a chance discovery,” Li says. The aluminum particles are about 50 nanometers in diameter, and naturally have an oxidized layer of alumina (Al2O3). “We needed to get rid of it, because it’s not good for electrical conductivity.”

Converting the alumina layer to a thin layer of titania (TiO2) gave a better conductor of electrons and lithium ions. Reacting Alumina with sulfuric acid released excess water which reacted with titanium oxysulfate to form a solid shell of titanium hydroxide with a thickness of 3 to 4 nanometers.

The team explains, “What is surprising is that while this solid shell forms nearly instantaneously, if the particles stay in the acid for a few more hours, the aluminum core continuously shrinks to become a 30-nanometer-across “yolk,” which shows that small ions can get through the shell.”

After further treatment, the particles are then tested through 500 charging-discharging cycles. Thickening the titania shell.    The inside of the electrode, though, remains clean with no buildup of SEIs, “proving the shell fully encloses the aluminum while allowing lithium ions and electrons to get in and out.” The resulting electrode gives more than three times the capacity of graphite (1.2 Ah/g) at a normal charging rate, Li says. At very fast charging rates (six minutes to full charge), the capacity is still 0.66 Ah/g after 500 cycles. 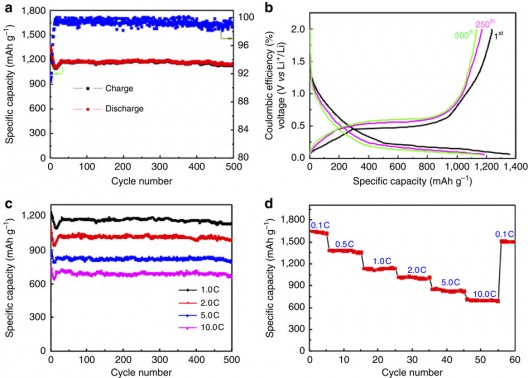 With inexpensive materials and a simple manufacturing process that could be easily scalable, Li says, “It’s probably the best anode material available” for applications that require a high power- and energy-density battery.  Full cell tests using lithium iron phosphate as cathode have been successful, indicating ATO is quite close to being ready for real applications.  That cathode would be a further protection against thermal runaways.

MIT’s and Tsinghua University’s work is published in Nature Communications.