Richard Steeves is an oncologist in Madison, Wisconsin, on the faculty of the University of Wisconsin School of Medicine and Public Health, and has hosted your editor’s visits to AirVenture in 2013 and 2014. 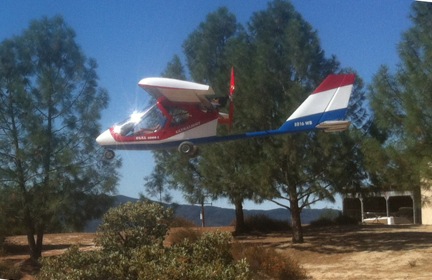 He recently took delivery of the e-Gull he helped finish at Mark Beierle’s airport workshop near Santa Margarita, California.  The airplane was a pre-owned craft that was rebuilt for electric power in Mark’s shop.  Richard had been a speaker at a symposium on thorium reactors, a subject important to this cancer-fighting radiation specialist, and then vectored over to Mark’s field to see his “new” airplane. 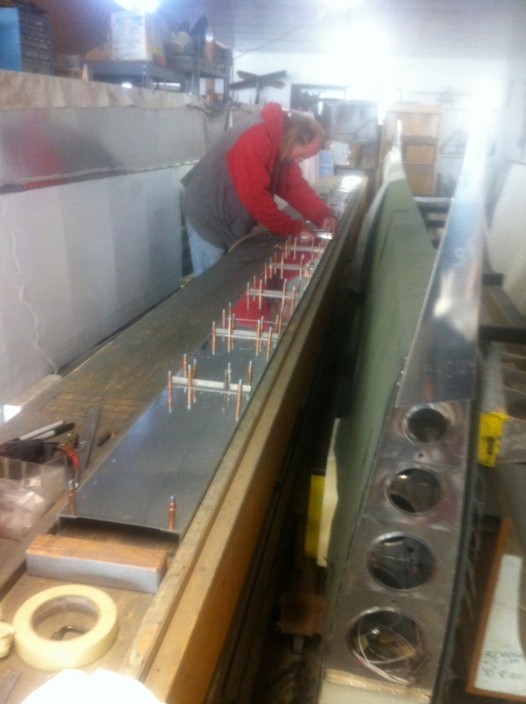 Donny Morgan, who Richard describes as a “meticulous tech,” works on 28-foot spar

Multiply skilled, Richard previously built a beautiful example of Molt Taylor’s Coot amphibian, and spent many happy hours flying along the Wisconsin River near his home.  He writes and edits the Coot-Builders’ Newsletter, and has published three books intended to help newcomers to the Coot family – The Coot Story, The Coot in a Nutshell and The Essential Coot.  His interest in electric aircraft manifests itself in his attendance at the Electric Aircraft Symposium four years ago, and his interest in forward-looking technology. 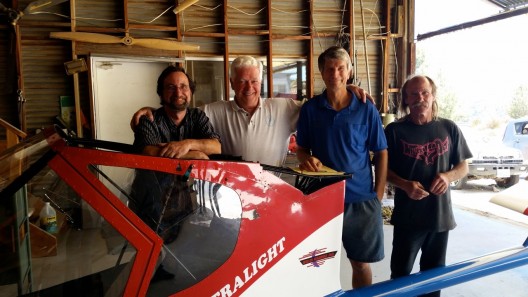 Richard describes “dropping in” on Mark’s hill-top airport.  “After the thorium energy conference I drove south to visit with Mark Beierle, and to see how a complete electrical power system can be harvested from a Zero electric motorcycle and “transplanted” into one of Mark’s lightly used and well-built Gulls. Mark lives on a dry hilltop, a 45-min drive east of Santa Margarita. Since most of California is suffering from severe drought conditions, Mark’s place reminded me of a visit to Inner Mongolia 11 years ago. We divided the long weekend into flying his 2-place Odyssey, building a new 28-foot wing, and electrifying a Soaring Gull.  Getting the hang of flying one of Mark’s Gulls is a memorable experience, because the view is spectacular, and you’re sitting in a wrap-around cabin with little in front of you except for a great view! What made it especially exciting for me was taxiing down a bumpy, rutted, sandy slope at breath-taking speed and hurtling off a cliff into space above cacti, century plants and small, isolated goat farms among dry forest.”

Richard survived to return to Madison and await delivery of his e-Gull.

Mark Beierle is a pragmatic individual and likewise combined business with pleasure by delivering EO16 WB to Richard at AirVenture 2015, using it as a demonstrator during the international fly-in, then towing it to Richard’s home field at Sauk Prairie, about 98 miles south-east of Oshkosh. 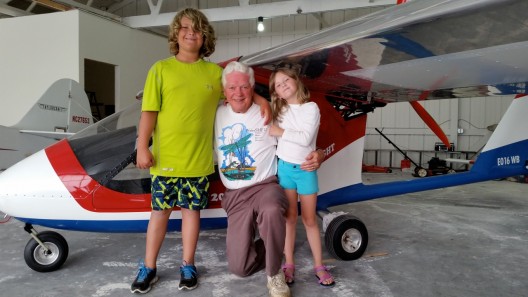 Grandson Avery (11) and granddaughter Morgan (8) with a proud grandfather,  Avery had the treat of running up the motor under supervision

After losing his two-seat Electra, which was on the verge of its first flight, Richard looked West for a single-seat, electric airplane, and wrote about it in the Coot Newsletter.  “Mark had a freshly built Gull in stock, and its engine had been removed, so it wouldn’t be too difficult to install a reliable battery and motor from an electric Zero motorcycle. He also advised that I build a longer (28-foot) wing to replace the 24-footer [already on the airplane]. It all sounded too good to be true. Before year’s end I had climbed out of a sad outlook on life to begin 2015 with renewed hope. Yes, I had to give up the thrill of flying off water, but I had made that decision back in 2011. And yes, I had to appreciate the joy of flying by myself, but that also freed me from FAA oversight. My hangar-mate asked me why I didn’t just buy my old Coot back and enjoy life as in the past. But for me, that’s an earlier chapter. I want to experience electric flight with all of its ups and downs, just the way I’ve come to appreciate electricity after putting solar panels on my roof. We all need to dream, and if you can follow one with passion, it’s fun!”

Richard enjoys building and flying.  “Bravo is giving me great joy whenever the wind slows down a bit, and I’m also having great fun building the long (28-foot) wing.  This should give me 90 minutes of flight instead of the current 60.”  He’s currently using the 11.4 kilowatt-hour Zero battery. 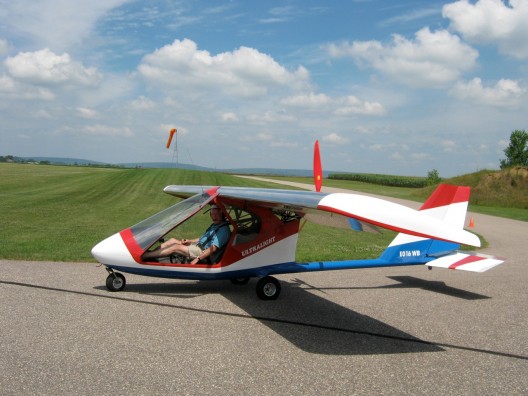 Citing his log, Richard notes, “I take off with ~22 [kilowatts] at full throttle, but cut back to 10 – 12 [kilowatts] in cruise, and prop just barely moving on landing.  Mark encourages me to fly it down to no-charge (dead) over the field, but I haven’t done that yet.  It’s rather nice to land with a little bit of “steam” on board.”

Richard has been keeping a well-documented log book, and we’ll look at that in an upcoming blog entry when he and Martin Koxxy have more hours on their machines.