Besides the incentives offered by the Green Flight Challenge and the Lindbergh Electric Aircraft Prize, a venerable institution is encouraging electric flight with a series of prizes.  The Experimental Aircraft  Associations plans on awarding $60,000 to electric flight competitors during this year’s AirVenture in Oshkosh, Wisconsin.

According to EAA’s Newsline, “One entry in the EAA’s $60,000 Electric Flight Prize during AirVenture comes from a well-established design, the Electric Lazair, based on an ultralight designed more than 30 years ago by Dale Kramer, EAA 145132. Between 1979 and 1985, his company, Ultraflight, produced about 1,200 kits. Calling the twin-engine Lazair ‘an ideal vehicle for electric conversion,’ Kramer wrote that he has dabbled in trying to ‘electrify’ one several times.”

Kramer recounted making several “thwarted” attempts, but shared the news of a Lazair flying in England on two Plettenberg Predator motors, as reported in this blog. 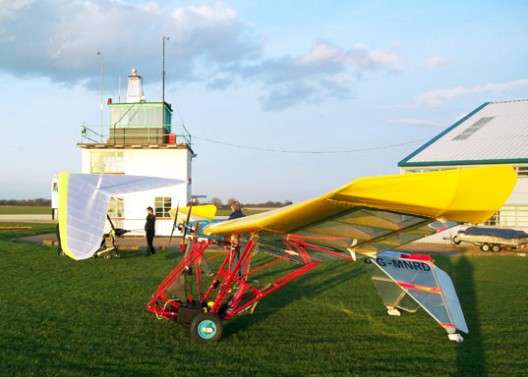 Kramer said the radio-control world “has been invaluable to me in obtaining knowledge that I need to build this unique version of the Lazair,” according to the EAA article.

The power package represents a real bargain, with Turnigy’s motors selling at $299 each, OPTO controllers going for $570 each, and the batteries estimated to cost about $1,000 to $1,200 for the cells, and not accounting for wiring, connectors, etc.

These will be recharged with six FMA Direct PL8v2 model aircraft chargers, each drawing current from two 12-Volt, 900-Watt Dell Poweredge 6650 power supplies in series and providing 1,800 Watts at 24 Volts.  This is where it gets pricy, with each FMA unit costing over $350 and each Dell power supply(pulled, apparently from a server) at some unknown cost.  Charging the system might cost more than the system.

Most surprising are Kramer’s grand plans, show “tests show he can expect close to two hours of flight endurance with one-hour recharges. He plans to fly the airplane this summer from his home in Hammondsport, New York, to the Atlantic Ocean, cross-country to the Pacific, then to Oshkosh before returning home.”

The EAA plans four categories for prizes; endurance, time to climb, maximum speed, and a special innovation award, determined by judges from the sponsoring organizations and firms.  Judges, “Will, by consensus, determine a first-, second- and third-place position to recognize the aircraft that, in their opinion, represent the most significant advancement in electric aircraft design, construction, technology and innovation.”