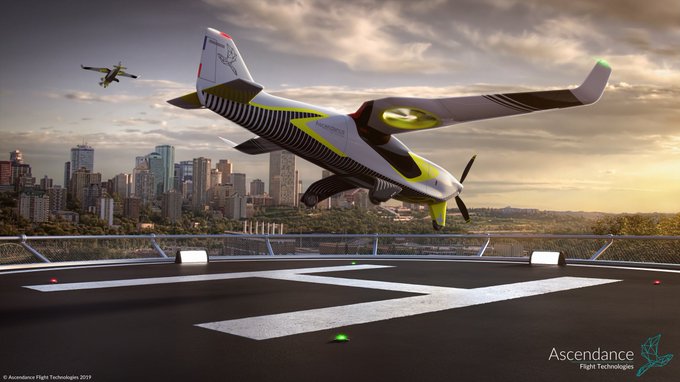 French company Ascendance Flight Technologies offers a four-seat design that combines hybrid propulsion with vertical takeoff and landing capabilities, and then scoots around on conventional wings.  Etea’s technology seems a lot like that of Pipistrel’s 801 or several other eVTOLs.

The design team at Ascendance comes from Airbus, and claims to have made the first electric aircraft flight across the English Channel with the E-Fan 2.0.  Your editor offers a few minor inclusions. 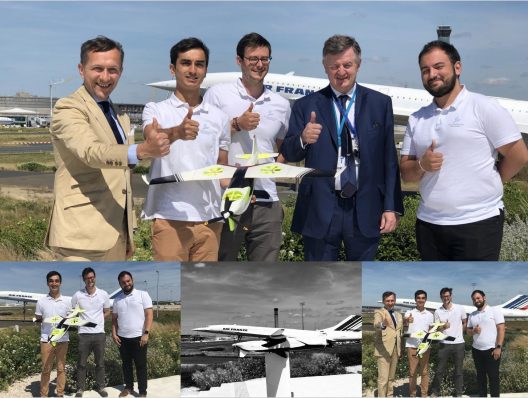 Ascendance founders with model of their creation – enthusiastic, to say the least

First, as we reported on October 10, 2009, “Gerard Thevenot, a long-time championship-level hang-glider pilot, celebrated the centennial of Louis Bleriot’s flight across la Manche by flying his hydrogen-powered La Mouette hang glider over roughly the same route Bleriot took between Calais and Dover on August 6, 2009.  Missing the centenary by a few days (Bleriot made the hop on July 25, 1909), Thevenot took an hour and seven minutes to duplicate the trip Bleriot managed in 37 minutes.”  It was an Eck/Geiger propelled machine, powered by H2.

“Michael Coates, the U. S. General Distributor for Pipistrel Aircraft, sent the following missive from Ivo Boscarol, General Manager and Founder of the Slovenian company, now in its 26thyear.

(Editor’s note: this may have been an unofficial “first” because of the unconventional method of launching the Cri-Cri, but that might make it even more exciting.)

‘From the available information that we have, shortly after the flight announcement, an order was issued to stop him but he did not respect it and he successfully crossed the channel this evening, 9. July 2015 in the first flight over the channel with electric powered aircraft in the history .  (It is unclear whether French and British authorities issued the order to stop, or Airbus.)”

The four co-founders of Ascendence explain their new machine.  “Our first product, a cutting-edge vertical take-off and landing (VTOL) aircraft will offer best in class safety and performances based on our unique and patented hybrid propulsion system.

“Our aircraft will blend into existing infrastructures, with low noise signature and low operational costs to make urban air mobility a reality without having to revolutionize the urban landscape.”  They don’t provide many details, but promise Atea will enjoy “low noise, low operational costs, long range,” and be a proper hybrid propulsion sky taxi.

Electric VTOL News helps with additional information.  A gas-turbine powered machine, Atea hauls a pilot and three passengers, has three electric lift fans with one in the nose ahead of the passenger compartment and one in each wing.  It should have a cruise speed of 200 kilometers per hour (124 mph) and a range of 150 kilometers (93 miles) according to the site.

Considering the success of the E-Fan, the partners newest creation should perform as planned,  and will add a reassuringly familiar look to the urban skyscape.