Biofuels have issues – and like a sulky mate, hit us repeatedly with contradictory demands or unanswerable questions.  If we plant fuel crops everywhere, their growth leaches the soil and their use as an oil/fuel substitute deprives the starving billions of food.  This intractable reality seems to leave us nowhere to go.

Audi, and its partner Joule (in America) are promoting a non-fossil compressed natural gas made by a process that mimics photosynthesis, and that pulls CO2 from the atmosphere as part of its makeup.  Audi has a clever plan, as presented at the Society of Automotive Engineers (SAE) 2013 Government/Industry Meeting.  In Europe, SolarFuel will provide motive power for the first Audi g-tron compressed natural gas (CNG) vehicles. 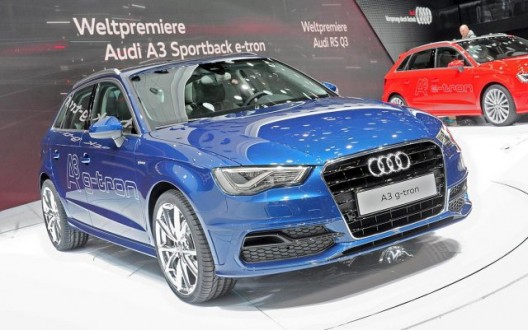 Joule explains its process: “Unlike fuels produced from agricultural or algal biomass, Joule produces fuels directly and continuously from sunlight and waste CO2 – avoiding costly raw materials, pretreatment and downstream processing. The company’s Helioculture™ platform uses photosynthetic microorganisms as living catalysts to produce fuel, not as intermediates to produce lipids or sugars that are subsequently converted to fuel.

“The entire process takes place in a novel SolarConverter® system, from photon capture to product creation and initial separation, with no requirement for arable land, fresh water or crops. Furthermore, this uniquely modular system can achieve replicable productivity whether installed across 250 or 25,000 acres – demonstrating Joule’s capability without the scale-up costs and risks that have hindered biofuels for years.” 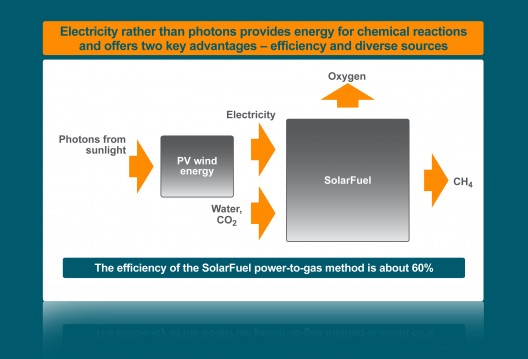 SolarFuel’s process yields liquid fuels clean energy sources, much like that of Joule

In a demonstration production run, Audi will make 1,500 of its compact A3 g-tron, dual-fueled hatchbacks and use CO2 gleaned from gases recycled from industrial sources.  This reflexive process, creating gases to be turned into green fuels which will be fed back into its vehicles, is a joint process with SolarFuel in Germany.

According to Motor Trend, “SolarFuel’s plant will convert hydrogen to synthetic natural gas through a process called ‘methanization,’ creating a carbon dioxide-neutral fuel it can feed back into the grid. Both the dual-fuel version of the A3 and the synthetic natural gas will be available only in Germany, which already has 1000 natural gas outlets for passenger cars, compared with just 300 in all of the United States.”  The disparity in distribution has been of concern to U. S. truckers, who would like to rely on CNG.

Audi AG teams with Bedford, Massachusetts based Joule in the United States and similar dual-fuel vehicles will be able to use either Joule’s e-products or conventional CNG.  Theoretically, new biofuels not using food crops, pulling CO2 from the atmosphere, and actually leaving the air cleaner during its production and eventual use could be a potent new force in providing energy to industry and transportation.  Our challenge will be to craft an infrastructure that can support the new technology.