Dr. Larry Ford, Vice President of the organization, led with highlights from CAFE’s past, including the scientific efforts to measure aircraft drag and provide actual numbers for comparing aircraft performance, a goal inherent in the CAFE name. He highlighted the work of many past and present CAFE volunteers (after all, CAFE is all volunteer, and a 501c.3 charitable organization promoting aeronautical research at both the grass roots and the highest levels), including the CAFE Barograph, a significant instrument that allowed objective flight performance characterization of individual aircraft and honest comparisons between aircraft. Larry let audience members know about the contributions of Jack Norris, and his creation of “zero thrust glide testing.” This innovation involved finding the point at which the propeller was not creating drag or producing thrust. At this speed and power loading, Jack concluded, the airplane was essentially a glider, and its true best gliding speed, lift to drag ratio, and other important attributes could be determined. When tests showed significant departures from other drag calculations, Jack expanded the test by having a propellerless Cessna 152 towed to 10,000 feet and released. The tests proved that the CAFE zero thrust figures were indeed correct.

The Foundation has encouraged performance testing at the competition level with events such as the CAFE 400, a 400-mile “race” which really measured an aircraft’s efficiency on a straightforward handicapping system, and was held every year from 1981 to 1990. Today that event has been upgraded to the CAFE Challenge, with Gary Hertzler holding the title for the performance of his modifed Varieze.   A second, more involved test, the  Triaviathon,  measures not only the aircraft’s weight, speed, and range, but its top speed, stall speed, and rate of climb to recognize superlative overall performance.  That prize has been held by Dave Anders for the last six years for his sparkling performance with a highly modified RV-4.  Larry called out individuals such as Steve Williams, a former HP engineer and CAFE board member for his inventive solutions and creations that help to precisely measure aircraft performance and make such prizes worthy of pursuit. 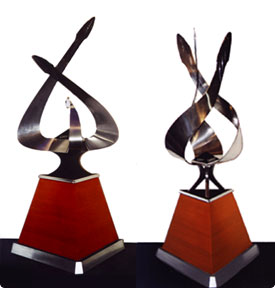 The CAFE Challenge and Triaviathon Trophies, perpetually on display at EAA's AirVenture Museum in Oshkosh, Wisconsin

Larry was followed by Dr. Brien Seeley, who provided the best view yet of the goals and direction for the Foundation. He emphasized the need to make new directions in aviation “transformative.” This term was highlighted repeatedly, with examples including personal air vehicles, integrated displays that will make navigation and adherence to air regulations easy, even in instrument conditions, and Dr. Seeley’s expansion on research with which he’d been involved on the electronic Certified Flight Instructor (eCFI). His three-part Kitplanes article on the subject can be found in the CAFE Reports.

Dr. Seeley’s talk emphasized that technology and history were moving toward convergence on the need for and the possibilities inherent in transformative changes in transportation. He praised those who were leading the field in these new technologies, and encouraged all to work toward cleaner flight, in both aerodynamics and power. He encouraged attendees to refer to the CAFE Technology Library, which contains seminal works by Fabio Goldschmied regarding aircraft drag reduction, for instance. Although these writings date from 1964 through 1988, they are only now finding application in real aircraft design, some of which may participate in the Green Flight Challenge (GFC).

Dr. Seeley urged participation in the GFC, scheduled for July, 2011, and to be held at Charles M. Schulz Airport in Santa Rosa, California. The Challenge is an economy run for aircraft, demanding 200 seat miles per gallon for the the 200 mile closed course run. But it also challenges competitors to achieve no more than a 52 mile per hour stall speed, a total 2,000-foot takeoff run to clear a 50-foot obstacle, and other elements that will drive creation of real-world aircraft that can use the existing infrastructure.

From Dr. Seeley’s and the Foundation’s early attempts to improve existing aircraft to today’s ambitious partnering with NASA on the GFC and enabling technologies, the CAFE Foundation continues to lead research into safe, practical personal flight, and fielded two able spokesmen to promote that vision at this year’s Electric Aircraft Symposium.