Founded in October 2010, NOHMs Technologies has developed a battery based on lithium-sulfur chemistry.  In April 2013, the company was awarded a $500,000 Phase II SBIR Award from the National Science Foundation (NSF) to scale a novel low-cost manufacturing process for long-life sulfur cathode composite materials. 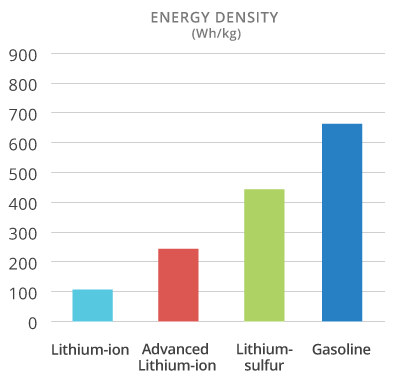 NOHMs (Nano Organic Hybrid Materials) will locate to and use facilities at the Kentucky-Argonne Battery Manufacturing Research and Development Center and the University of Kentucky’s Spindletop Administration Building.

NOHMs is developing electrode, electrolyte, and separator products as a 3-part solution for high-energy, low-cost, long-life, and safe batteries.

NOHMs says its composite sulfur electrodes—carbon nanoparticles infused with sulfur developed at Cornell – can deliver a specific capacity of 550 mAh/g for hundreds of cycles. Next-generation cathode materials being developed will exceed 800 mAh/g, according to the company.

Most researchers rarely mention battery separators, but  NOHMs is developing a hybrid materials thin-film separator that provides a ceramic-polymer-liquid barrier to stabilize the lithium anode, that should increase the lifetime and safety of lithium-sulfur batteries. 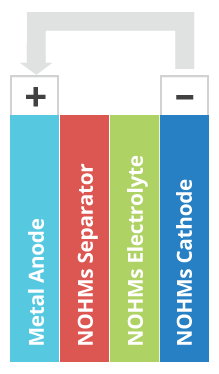 “This carbon framework is (i) flexible to tolerate many charge-discharge cycles; (ii) porous to allow full-access for lithium-ions to active material; (iii) electrically conductive; and (iv) scalable for manufacturing, providing an advantage over other particle-based, coating-based, or substrate-based solutions. NOHMs has successfully tested its materials in battery prototypes.

“Battery prototypes using NOHMs materials have demonstrated more than 400 Wh/kg and more than 500 recharges using gram-scale materials synthesis; more than 3 times the energy density of commercially available lithium-ion batteries; and using materials and processes that have the potential to make batteries at 1/3 of the manufactured cost.”

This may turn into a Kentucky-Tennessee battle, with Oak Ridge National Laboratory scientists having announced their lithium-sulfur research a few months ago.  “The new ionically-conductive cathode enabled the ORNL battery to maintain a capacity of 1,200 milliamp-hours (mAh) per gram after 300 charge-discharge cycles at 60 degrees Celsius. For comparison, a traditional lithium-ion battery cathode has an average capacity between 140-170 mAh/g. Because lithium-sulfur batteries deliver about half the voltage of lithium-ion versions, this eight-fold increase in capacity demonstrated in the ORNL battery cathode translates into four times the gravimetric energy density of lithium-ion technologies,” according to ORNL researchers and reported in this blog.

The original Cornell international patent application for this technology can be found here, and some surprising characteristics of the materials involved here, including their use as lubricants and heat transfer fluids.  Cornell also claims electrical properties far exceeding those NOHMs promotes as more practical at this time.  The future of battery power could be very interesting.