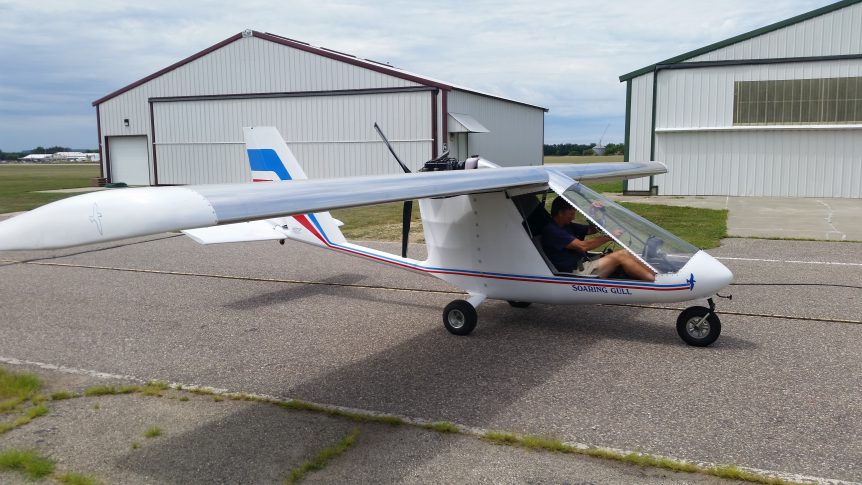 Lead image shows Mark Beierle in the Soaring Gull of his design with which he accompanied Richard Steeves to Oshkosh.

As many readers know, Richard Steeves, a physician and teacher at the University of Wisconsin – Madison is also a builder and long-time advocate for an amphibious aircraft called the Coot.  He publishes the Coot Builders Newsletter and stages a recurring AirVenture event, a yearly get-together of fellow Coot builders.  Recently, he got into electric aviation and has built and flies Bravo, an e-Gull designed by Mark Beierle.  Richard’s newsletter now features articles about amphibians and electric flight.

Mark showed up at Richard’s hangar at the Sauk Prairie Airport, a lovely stretch of green bordered by hangars and bisected by a concrete runway pointing south toward Madison and north toward the Wisconsin Dells.

Beierle “worked very methodically and precisely to optimize Bravo beyond my dreams,” according to Richard. 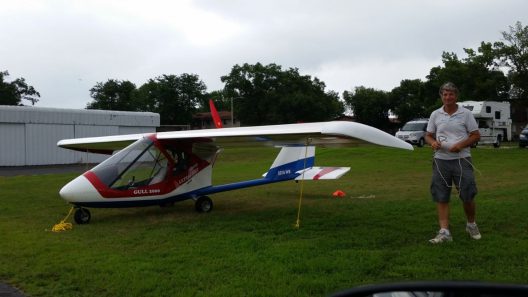 Mark Beierle and Richard Steeves’ example of his e-Gull, Bravo

The Coot Builder’s Newsletter reports, “Mark Beierle showed up at the Sauk Prairie (SP) airport a week before the EAA convention to build a snug-fitting cowling around Bravo’s motor. The idea was to minimize aerodynamic drag and obtain the best range possible for its 11.4 kWh battery. 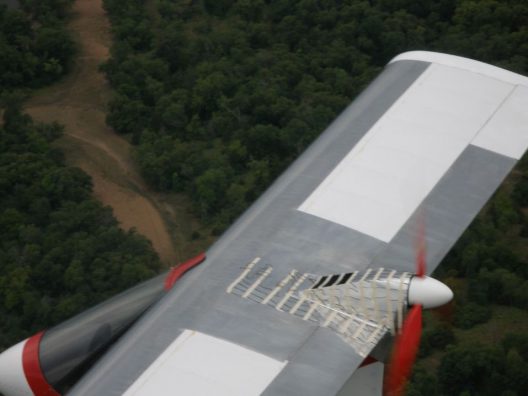 tufts show clean airflow leading over cowling added by Mark Beierle.  Wing shows absolutely flush riveting that comes with a Beierle-built kit.  Richard adds, “Notice the raised red “brow” over the leading edge of the wing in the center. This was a big insight, and nicely corrected by Mark.”

“To test its effectiveness, Mark flew next to the runway, 3 feet above the grass, while I drove down the runway’s centerline and Mike Cummings took images. Happily, all the yarns streamed back without any flaws. Testing the upper cowling wasn’t as easy, for it required that Mark fly close to me, and take photos from above. At first I was concerned about 2 planes flying so close to each other, but Mark is a superb pilot, and he buzzed around me for the needed images while I flew steadily in stable air.” 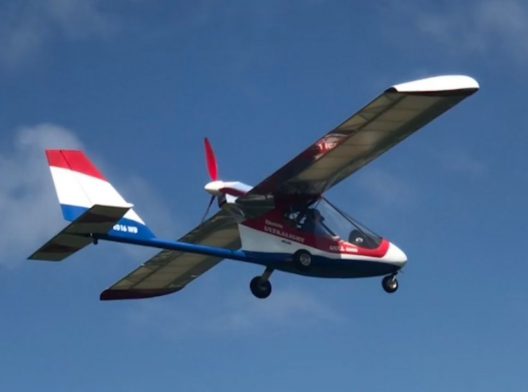 “Yes, the airflow over the controller was perfect, and the battery didn’t overheat even with the side “blisters” closing off air access almost completely.

“The only time the battery overheated was in Markesan, with two chargers going in hot weather, and the weather slowed us down there anyway. 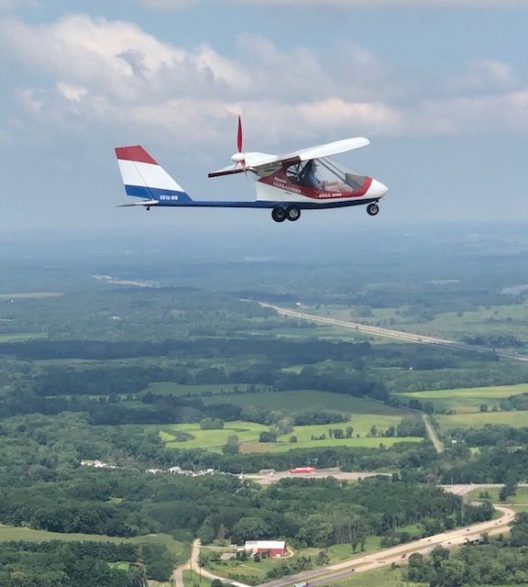 Bravo in flight on the trip to Oshkosh

“Mark did all his tests and also flew with me to Oshkosh in an old J-model ICE-powered Soaring Gull that he sold at Oshkosh to a [customer] from Ohio.

“It was great to have Mark flying next to me all the way to Oshkosh. For greatest efficiency and energy reserve, I flew Bravo at 50 mph (8 kW) and landed twice (Portage and Markesan) for recharging, which took only 2 hours at each stop.  …The Portage airport… manager, John Poppy, took good care of us as we waited for rain showers to pass.” 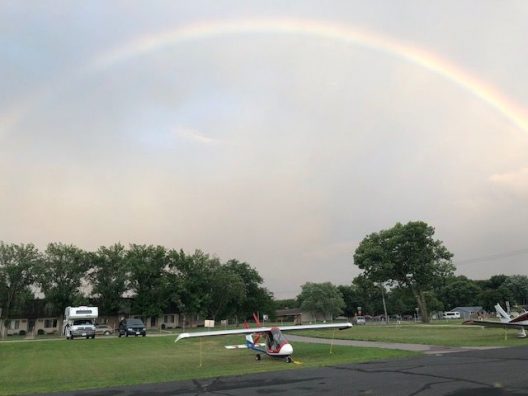 A rainbow over Portage welcomes Bravo

“You can’t imagine how much I appreciated Mark’s presence on the flight to Oshkosh in pretty bad weather…took us 3 days, camping at each stop.

“Also, the approach & landing in the cramped little grass strip in the UL area was challenging for the first time, but was easy once there.”

The Seaplane Base Gathering 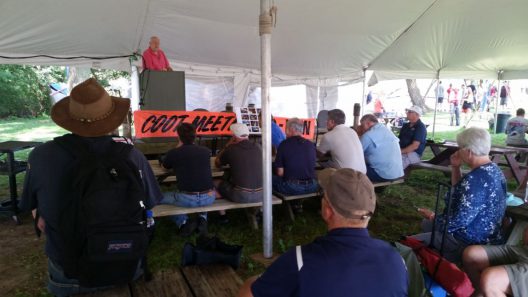 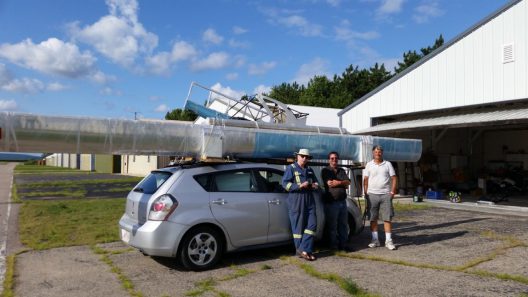 The day after the Coot meeting we pooled efforts to mount a complete kit onto the top of Ray’s little Pontiac Vibe. He actually made it back to New Brunswick this way with only minor issues. Best of luck building and flying your e-Gull, Ray!”

Perhaps as a vision of a plausible future, Richard says that Mark is considering an amphibious form of the e-Gull, thus combining Richard’s two great loves in flying.