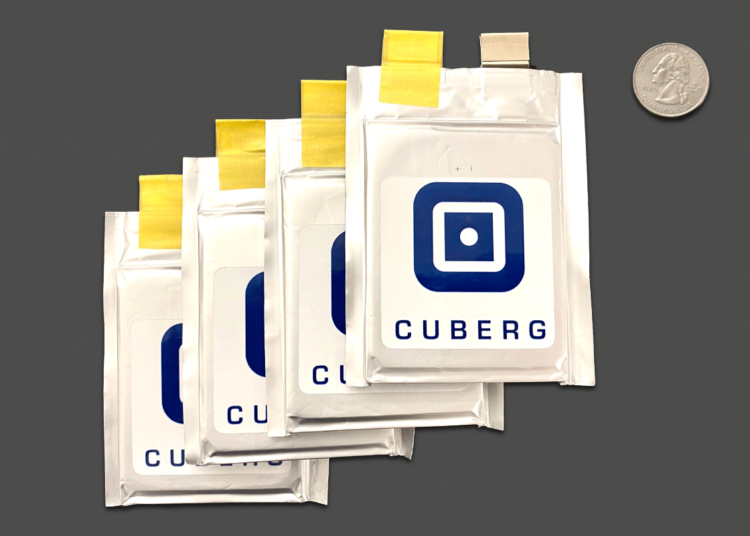 Cuberg, a startup battery company based in Emeryville, California, is pretty specific about its cell-level battery performance – 369 Watt-hours per kilogram at a discharge rate of C/20.  This was verified in testing at the Idaho National Laboratory, with Cuberg cells demonstrating a specific power of 2,000 Watts per kilogram.   Cells lasted through “around” 370 cycles with C/2 charging before they dropped to the ability to maintain 80-percent capacity.  See a .pdf of the test results here.

C Rate is the charge and discharge rate for a battery. Note the differing duration of a battery’s ability to provide a given amperage

INL tested around 20 of Cuberg’s battery cells, covering multiple cell variants across a spectrum of performance tests. “While the testing all looked good, our announcement addresses the specific metrics that are of most impact to our industry,” Cuberg CEO Richard Wang told eVTOL.com.

Gasoline, with a known energy content of 33.410 kilowatt hours per gallon, easily outdoes the best batteries at this time.  Calculating the energy in a kilogram of petrol, we can more easily make comparisons with batteries.  If gasoline weighs around 6.3 pounds per gallon (based on formulation and additives), it would contain energy equivalent to about 11,670 kilowatts per kilogram. Thus, it would take about 31.62 kilograms of Cuberg batteries to equal the energy in one kilogram of gasoline.

Cuberg co-founder and CEO Richard Wang thinks the independent validation, “Provides a measure of credibility in an industry that has often been plagued by hype and inflated claims.”

In an interview with eVTOL.com, he explained, “We think for the industry as a whole to move forward effectively, more and more independent testing will be a very positive development and allow our customers to efficiently compare technologies and screen them and assess them for viability.”

The tests, to Wang, show that his batteries are on target to achieving a “sweet spot,” of around 400 kilowatt-hours per kilogram, which he considers “the holy grail” for electric aircraft and particularly eVTOL craft.

Wang notes the “three key parameters” that determine how useful a battery can be in aircraft.  First is the energy of the cell per weight. Second is the power of the cell, or how quickly energy can be drawn from the cell – necessary for “intensive vertical take-off.”  This is cycle life – how many times users can charge and discharge the cell – something that often determines the operating cost for the electric craft.

Hoping to reach their customer base with cells now, “very, very competitive compared to other technologies,” Cuberg focuses on improving cycle life in particular.  Wang anticipates, “Getting to  2C charging 1,000 cycles, along with that 400 Wh/kg. . “The company is also in the process of developing a 20-Ah cell for aviation applications — a size that will balance the installation efficiency of larger cells with thermal safety and certifiability considerations.”

Considerations for Cuberg and Others

At this rate, it should be next to impossible to make a practical electric airplane.  Luckily, the relative efficiency of electric motors helps even things a bit.  Gasoline engines manage to be about 20 to 35-percent efficient, meaning 65 to 80 percent of the fuel’s potential energy is wasted as heat or flows out the exhaust pipe.  Electric motors manage to extract 85 to 97 percent of the energy contained in the battery.

That lowers the difference between gas engines and electric motors to about a 10:1 ratio as far as the energy density of their fuel is concerned.  Luckily, electric motors are light for their power, often putting out six or seven horsepower per pound.   Traditional four-stroke aircraft engines generally produce one horsepower per two pounds of engine weight.  The difference enables the use of more batteries for the same gross weight of the airplane.  At some point, the ability to provide long-term energy, short-term power, and longevity in terms of cycle life will enable replacement of fossil-fuel power plants.

Only five years after its founding, Cuberg comes close to equaling the performance of batteries from more established players.  Securing $10 million in funding from Boeing’s Horizon X Venture, and various government grants, the firm advances with a Small Business Innovation grant from the Department of Energy.  Validation took place as part of the Battery500 program, a DOE-sponsored research consortium, nominally aiming for 500 Wh/kg.

Cuberg does not make its pouch cells in house, but obtains them as a “nearly complete cell,” that “leverages all the efficiencies and quality improvements from the lithium-ion world. The only thing that’s missing is the electrolyte — that’s our secret sauce.”  Cuberg injects its proprietary, non-flammable electrolyte into the cells, quality checks them, and then ships them directly to customers.  Wang explains, ““For the next couple years, we see this as the most efficient model, because it allows us to scale up very easily and maintain good quality control, and also competitive pricing,” 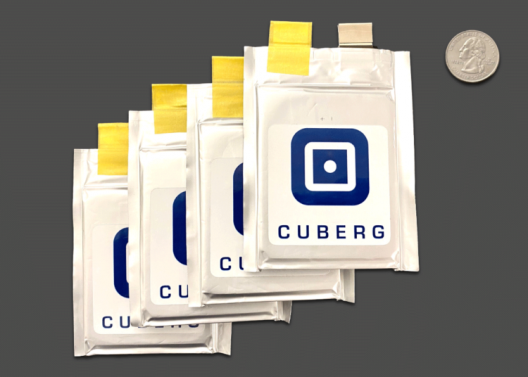 The non-flammability is a characteristic much to be desired when cruising over in an urban air mobility machine over city streets. Wang says, “All historic electrolytes with lithium-ion batteries are made of organic solvents that are highly combustible [Our] more stable electrolyte allows it to be much more tolerant to abuse in different kinds of conditions.”

Working on commercialization “very aggressively,” Cuberg has been shipping samples to “top electric aircraft developers around the world. Initial results have been encouraging.”