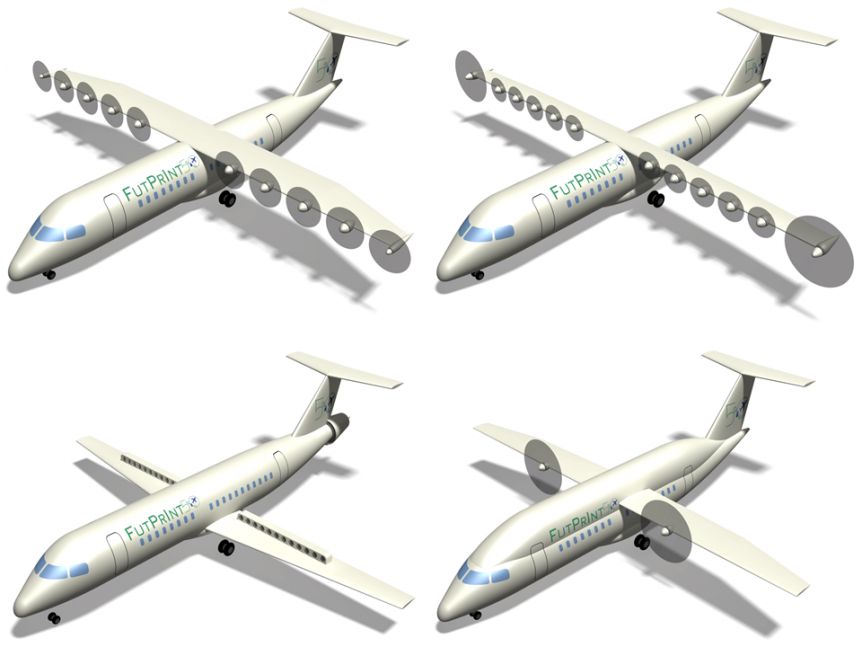 Surprisingly, one of their major findings is that “Electric flight enables lighter aircraft with smaller wings and distributed propulsion systems.”  Battery weight has caused MagniX and Ampaire to reduce the number of passengers or the cargo loads on conversions of existing airframes.  To counter those issues, “An EU research project is investigating the potential for new propulsion systems and aircraft concepts.”  Obviously, these new concepts will need to take advantage of advanced materials to lower airframe weight.

Thousands of airliners parked in dry desert locations highlight how the COVID crisis has affected air travel.  Despite the ongoing interlude in travel, we should experience five percent per year growth in air traffic every year until 2030, according to forecasts reported in Horizon magazine. 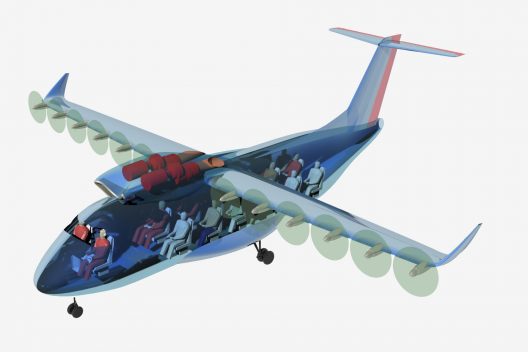 DLR study for 19-seat regional airliner with multiple propellers – similar to X-57 Maxwell concept.  This would be hybrid, though, with turbine-driven generators

Countering that rosy outlook, Horizon reports, “As a result of the COVID-19 pandemic, U.S. airlines have cut capacity by more than 1.4 million seats, or 6 [percent] in the last week alone, according to OAG, an airline data company.”  At some point in the future, though, threats of being enclosed in a tube with contiguous and contagious fellow passengers will finally dissipate and people will fulfill their wanderlust.  Then it will be up to aircraft designers and makers to prevent a return to the spread of something even more of an existential risk – air-borne pollution.

The need to jumpstart the economy is great worldwide, but the necessity of reducing airline emissions is also great.  Aviation, already responsible for two percent of global greenhouse emissions, will grow that share unless it can be brought into line with the European Union’s target of net-zero greenhouse gas emissions by 2050.

Aviation contributes significantly to the European economy, generating more than €500bn per year and supporting 9.3 million jobs.  To help maintain that benefit, hybrid-electric aircraft will probably be a short-term fix.

Dr Xavier Roboam, a senior scientist and deputy director at the LAPLACE lab at the University of Toulouse in France, explains, “By hybridizing sources, you can reduce the fuel burn of aircraft and therefore the environmental impact.  It’s the first step before the final step, which may be zero-emission, fully-electric aircraft.”  Since the best batteries are still only about three percent as energy dense as kerosene jet fuel, an engine/generator and small fuel load can extend the range of electrically-propelled aircraft.

Hybrid planes will also have to reduce enough weight over battery-powered aircraft to compensate for the fuel load and any additional battery weight.  Dr. Roboam and associates, working with the HASTECS (Hybrid Aircraft; academic reSearch on Thermal and Electrical Components and Systems) project, are focused on systems that convert power between batteries, generators and electric motors.  Roboam explains the group’s goal: “We are trying to maximize the ratio between the power you are able to deliver and the weight that is necessary to deliver that power.”

The team aims to “design an electric motor that would double the power-to-weight ratio of electric motors used today, such as in a Tesla electric car, to achieve 10 kilowatts per kilogram by 2035. They also want to increase the power-to-weight ratio of power converters to 25 kilowatts per kilogram by the same period.” This could lead to lighter aircraft burning up to 10 percent less fuel.

The team claims to have met their goal for the electric motors, optimizing their structure by using electromagnetic materials, for example, and special Litz wires (a special type of multistrand wire or cable used in electronics to carry alternating current (AC) at radio frequencies) to help improve performance.   Smaller motors heat up more, so the team also came up with a more efficient way to cool them using an internal cooling system.  Their power conversion system met similar goals, “…beyond the target which is very successful for the project.”  Dr. Roboam thinks a hybrid aircraft using their concepts could fly in five to 15 years.

Professor Andreas Strohmayer, head of the Department of Aircraft Design at the University of Stuttgart in Germany, and his colleagues are also working on a hybrid-electric aircraft with up to 50 seats that would start providing commercial flights in 2035 as part of the FutPrInt50 project.  Professor Strohmayer relates, “The 40 to 50 seat range is the first commercial tool to have an impact (in terms of) transport capacity.  The larger you go from there, the more issues you have, so I believe in a step-up approach.”

Airbus takes a next step, hydrogen, with their September 21 announcement that they plan for the world’s first zero-emissions aircraft using hydrogen as a power source*.  Professor Strohmayer adds, “We are working on our reference aircraft so that we have a one-to-one comparison of our design against a conventional aircraft of the same size.”  Several possibilities, shown in the following video, help explain that hybrid and hydrogen concepts could even be combined.

DLR and various academic groups can pull information from NASA in America, ONERA in France, and agencies in South America and the Netherlands. Research groups will also focus on harvesting energy from the airflow to help reduce battery and fuel weight in hybrid aircraft.

By the end of the project in 2022, the team will have developed a technology roadmap for all the different components needed, as well as a roadmap for the standards that need to be met for certification. It will be accompanied by a hybrid aircraft design that could be transferred to an aircraft manufacturer for production and development. Strohmayer concludes, “My vision is that my grandchildren can sit with me onboard one of these aircrafts in 20 years from now. I want to see this built.”

Fans and propellers produce aircraft noise during flight but total noise in flight is largely determined by aerodynamics, “produced by the propellers or fans of the engines and the airflow around the fuselage and wings.” Researchers have found that many small propellers create a different sound from that of two large ones, and examined the flow acoustics in depth.

Martin J. Hepperle of the DLR Institute of Aerodynamics and Flow Technology, cautions, “The reductions that our concepts are calculated to achieve are in the single-digit range. Our preliminary investigations indicate that hybrid-electric regional aircraft with distributed propulsion systems would result in a 10 percent noise reduction.”   He retains a realistic outlook, noting that although hybrid systems would allow power to be generated directly on board, this would increase weight.  Further, “Conversion and transfer of electricity would also result in some power losses.”

Hepperle ran up against the weight of energy storage, since present-day batteries add to the aircraft’s mass and and yet do not allow long range.  Near-term, Hepperle sees battery-only systems as practical only for “small sports aircraft,” and hydrogen fuel cells as very expensive and complicated. 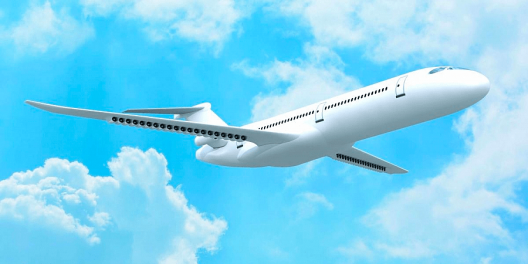 He sees kerosene-fueled hybrid propulsion systems as a practicable transitional solution. Although carrying a complex propulsion system, this type of electrically powered regional aircraft could “easily” carry 100 passengers for up to 2000 kilometers.

Despite the many issues being sorted out by researchers, Current findings and concepts for electric aircraft can be an option for short-haul routes.  The DLR cooperates with research as part of the European Clean Sky 2 Advanced Engine and Aircraft Configurations (ADEC) projects, ONERA,  TU Delft, NLR (The Royal Netherlands Aerospace Center) and industry partners Airbus and Rolls-Royce to determine the potential of innovative propulsion systems and aircraft concepts.  DLR is working with the Synergetic integration of distributed hybrid-electrical propulsion systems (SynergIE) project, part of Germany’s national aviation research program.

While many of these efforts will mirror configurations such as the NASA X-57 Maxwell or other American research programs, all such projects help point us toward a clean sky future.

*This is preceded by aircraft such as Pipistrel’s Hy4, already flying at least partially on hydrogen and e-Genius, a product of Stuttgart’s aerodynamic programs.