This dictum from Paul MacCready that we can do a great deal more with far less material expenditure is well realized in a big way by researchers at the California Institute of Technology (Caltech) with their new type of solar cell. Using about two percent of the silicon semiconductor material normally required for crystalline cells, and achieving a high level of energy conversion, the new cells may also be relatively inexpensive to manufacture. 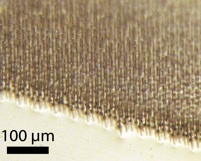 As noted by Harry Atwater in Caltech’s press release, “These solar cells have, for the first time, surpassed the conventional light-trapping limit for absorbing materials…” Atwater is Howard Hughes Professor, professor of applied physics and materials science, and director of Caltech’s Resnick Institute, which according to the press release, “focuses on sustainability research.” Arranged like rug fibers in a vertically-oriented array, the individual silicon wire solar cells comprise a small portion of the total horizontal area of the cell, the rest being an inexpensive polymer substrate. Atwater and his fellow researchers claim that the individual “wires” are capable of absorbing 85 to 100 percent of the solar energy shining upon them. So why did the researchers fill only two-percent of the space available with this highly-efficient material? 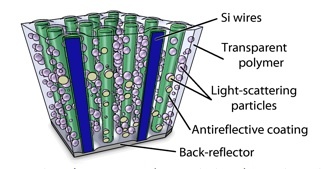 “‘When we first considered silicon wire-array solar cells, we assumed that sunlight would be wasted on the space between wires,’ explains [Michael] Kelzenberg (one of the researchers). ‘So our initial plan was to grow the wires as close together as possible. But when we started quantifying their absorption, we realized that more light could be absorbed than predicted by the wire-packing fraction alone. By developing light-trapping techniques for relatively sparse wire arrays, not only did we achieve suitable absorption, we also demonstrated effective optical concentration—an exciting prospect for further enhancing the efficiency of silicon-wire-array solar cells.'”

The small amount of expensive silicon involved lowers the overall materials cost of this cell, and, “The composite nature of these solar cells, Atwater adds, means that they are also flexible. ‘Having these be complete flexible sheets of material ends up being important,’ he says, ‘because flexible thin films can be manufactured in a roll-to-roll process, an inherently lower-cost process than one that involves brittle wafers, like those used to make conventional solar cells.'”

Details of the project were reported in the journal Nature Materials.