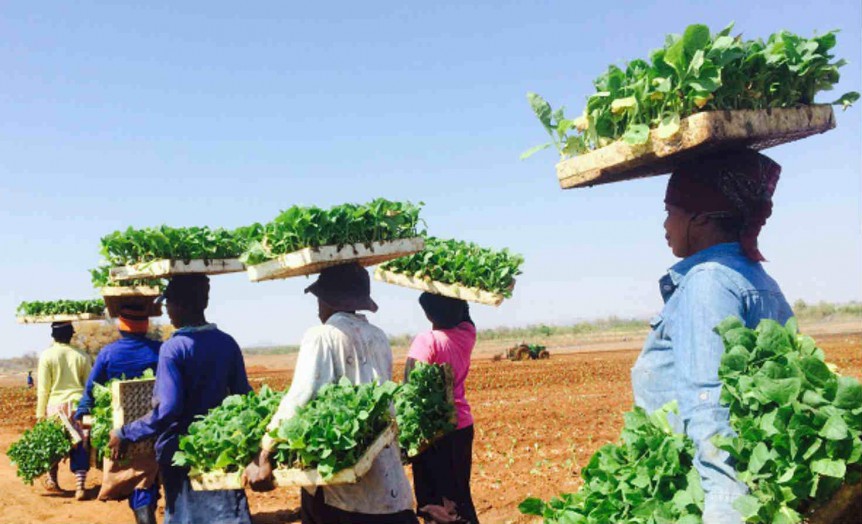 Biofuels would be wonderful if they didn’t starve people while feeding trucks, cars and airplanes.  Living with such a constraint, though, might prove to be productive, profitable, and environmentally sound.

The Guardian describes efforts in America’s tobacco country to grow a crop that will be less destructive of human lungs and hearts if it is consumed in jet engines rather than in cigarettes.

“’We’re experimenting with varieties that were discarded 50 years ago by traditional tobacco growers because the flavors were poor or the plants didn’t have enough nicotine,’ explains Tyton [BioEnergy Systems] co-founder Peter Majeranowski.”

In a case that oddly enough is GMO free, “Researchers are pioneering selective breeding techniques and genetic engineering to increase tobacco’s sugar and seed oil content to create a promising source of renewable fuel. The low-nicotine varieties require little maintenance, are inexpensive to grow and thrive where other crops would fail.”

Fuel tobacco is a higher-value crop than hay, for instance, and “looser” farming techniques needed to grow it could increase profits to the farmer.

Besides Tyton, the Lawrence Berkeley National Laboratory, in partnership with UC Berkeley and University of Kentucky, received a $4.8m grant from the US Department of Energy to research the potential of tobacco as a biofuel.

Half a world away, Boeing is partnering with South African Airways on Project Solaris, which saw its first tobacco-fueled passenger flight this year.  The Project uses a type of tobacco that would not be desirable for smokers.  Farmers can use “the same equipment and skills” needed to grow smoking tobacco, and “because the harvest is mechanized, it takes less labor to produce a crop.

One acre of such tobacco can yield up to 80 wet tons of biomass and byproducts, which can provide not only biofuel, but animal feed and fertilizers. 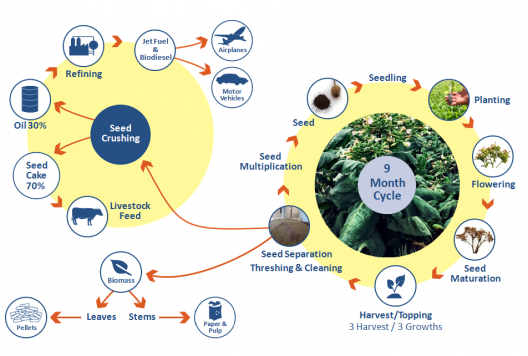 Value chain for Solaris tobacco, showing process and multitude of uses for product

South African Airways flew its Boeing 737-800 from Johanneburg to Cape Town (1,220 kilometers – 758 miles) using 6,300 liters (1,664 U.S. gallons) of a jet fuel made from nicotine-free tobacco grown in the Limpopo region for the Solaris Project.

As with oil, tobacco suffers from a global oversupply for the time being, so a new market is highly desirable for producers.  It may be helpful to SAA, too, reported to be in financial difficulties by Bloomberg, which comments on a hoped-for future for the airline and for tobacco fuel.  “Airlines are examining ways to power more flights from biofuels to limit the environmental impact of aviation and ease dependency on oil. Unprofitable SAA aims to have used 20 million liters (over 5,280,000 gallons) of bio-jet fuel by the fourth quarter of 2017, Ian Cruickshank, its head of environmental affairs, told reporters in Cape Town. He said the company is seeking to use 500 million liters (over 132 million gallons) by the same time in 2023.”

Project Solaris has created a special tobacco with smaller leaves, but largers “buds” or flowers that contain a significant amount on non-nicotine oil.  The stems and “waste” parts of the plant can make press cake for animal feed.  The plant can be used as fertilizer for other agricultural products and can provide water and crop protection, similar to other types of tobacco farming.  A boon to struggling farmers, the plant can provide up to three crops per year.

In 2015, Project Solaris earned the Roundtable on Sustainable Biomaterials (RSB) certification, one of the strongest sustainability standards for biomaterials in the world. The RSB certification provides a model to further expand the production of the Solaris crop in a sustainable way.

Not Only Tobacco, but Salt-water Plants

Boeing has also partnered with a consortium including Masdar University in the United Arab Emirates to produce biofuels from halophyte plants, which are able to thrive on saltwater.  In turn, they can be grown in desert regions irrigated by seawater, and provide a habitat for fish (which help fertilize the crop and provide a secondary food source).  No normally arable land is sidetracked to produce the fuel, which one expert describes as superior to the environmentally-destructive and low-grade materials coming from tar-sand production.

These efforts, well subsidized and backed by excellent science, show great promise for cleaning our skies and maybe even our lungs.