Shortly before appearing at the fourth Annual Electric Aircraft Symposium at Rohnert Park, California, Dr. Jaephil Cho was interviewed by Esther Levy of Material Views, an online resource dealing with, as the title implies, high-technology materials.

Dr. Cho, Dean of the new Interdisciplinary School of Green Energy at Ulsan National Institute of Science & Technology (UNIST), works with lithium-ion cells, and along with Dr. Yi Cui of Stanford University, is considered among the most forward thinking researchers in the field. Where Dr. Cui’s efforts are related to development of better cathodes, Dr. Cho’s work focuses on improving anode performance. Their efforts have led to an 80-percent improvement in cathode performance, as reported in Dr. Cui’s presentation at EAS III, and a 62-percent improvement in anode performance, according to Dr. Cho’s report at EAS IV. 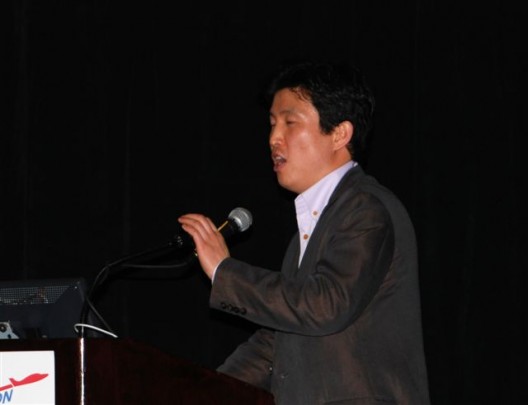 Considering that “normal” battery advancement has been on the order of 10 percent per year for the last few decades, either of these announcements should be seen as a breakthrough, especially considering the small teams and relatively low budgets academic groups receive for such research compared to what large companies can spend on commercial development of these resources. Dr. Cho, for instance, oversees the activities of 21 faculty members, 50 graduate students, 10 technical staff members and four post-doctoral researchers. The Ministry of Education and Science & Technology (MEST) has provided grants to the school of $35 million over the next five years for work in energy “harvesting and storage and flexible batteries.” Dr. Cho also manages the Converging Research Center for Next Generation Battery Technologies, devoted to these pursuits.

An indication of the difficulty in developing commercially feasible cells, MEST is involved with five companies, four national laboratories and 17 universities, all pursuing the same goals as Dr. Cho’s teams. As with all high intensity efforts, the rewards are potentially lucrative – an estimated $5 billion in the lithium-ion cell market over the next five years.

In the interview, Dr. Cho explains the extent of energy research in his native Korea, and the relative size of academic, pure research, and commercial groups. “The largest research community is companies. About 2000 R&D staff at Samsung, LG Chemical, SK energy, and Hyundai Motors are working on batteries and HEVs. The next largest is universities. About 20 universities (about 200 people including faculty and graduate students) are studying in the areas of battery materials (negative, positive, and electrolytes). National laboratories take the smallest portion of the community, where about 100 R&D people are working on batteries.” Because of this broad interest and overall intense subsidization, Cho claims South Korea’s small and medium to large cells are the world’s best.

In his presentation at EAS IV, Dr. Cho explained the painstaking process by which anode improvements come about. Silicon provides a good basis for the anode, but the material takes up a great deal of lithium – 10 times more than equivalent carbon anodes and enough to store high energy levels but to also to present a problem. That much lithium reacting with the other materials causes the silicon anode to expand and contract during charging and discharging. Since silicon is brittle, this eventually leads to cracking of the anode. Dr. Cho, collaborating with Dr. Cui, came up with silicon nanotube anodes, which resemble drinking straws. Cho notes the surface area inside and out the tubes allow for reaction with other battery materials. The shape, with its additional space over nanowires, allows more flexibility for expansion and contraction. Think of the difference in surface area between a strand of angel hair spagehtti and a penne pasta tube to create a culinary metaphor.

Dr. Cho reflected on trying different types of material combinations to achieve greater energy storage and faster release of that energy.  Lithium cobalt oxide (Li Co O2) batteries, for instance, have a higher rate capacity, charging and discharging high levels of energy in a short time,  than other lithium-ion cells, but build up tremendous heat in doing so, and sometimes explode under stress.   These have been used in consumer electronics such as laptop computers, and occasional news items and product recalls have highlighted safety concerns.  Scaling such batteries to meet electric vehicle needs increases the danger of catastrophic failure; heat buildup and mechanical stresses lead to a relatively short cycle life for such cells.

Lithium Iron Phosphate (LiFePO4) cells avoid the fire or explosion issue of other cells, leading to their acceptance for vehicles such as the Chevrolet Volt.  Most such applications use groups of 18650 cells, 18 millimeters in diameter and 65 millimeters in length.   Their small size individually reduces heat buildup and internal mechanical stressing, which leads to a high cycle life, and arranging them in series and parallel arrays allows for the wattage and amperage necessary.

A list of Dr. Cho’s other papers can be found here.

The high energy capability of the new battery materials shows promise, and Dr. Cho has created templates that would allow commercial production within three years.  As with many such enterprises, further research is needed to provide the longevity that will be required in electric vehicle applications.