The January 2011 issue of Popular Mechanics resurrects the perennial hope for a flying automobile.  The cover taunts, “(Go Ahead, Laugh) But NASA, DARPA & the FAA Are Serious.”  Sharon Weinberger taunts some makers a bit in her article, “Driving on Air,” as she looks at a variety of Transformer-style vehicles that can travel by land or air with the fewest inconveniences.  She notes the differences between propelling cars and planes, and looks at extremely different modes of giving people personal aerial transport, including the Moeller Skycar (“Inventor Paul Moeller has been developing the concept for nearly 50 years.  To date, the M400X has only hovered on a tether.”), the Martin Jetpack, The Cartercopter, and the Terrafugia Transition that’s been getting an enormous press following (and a featured spot in the Hammacher Schlemmer Christmas catalog) lately. 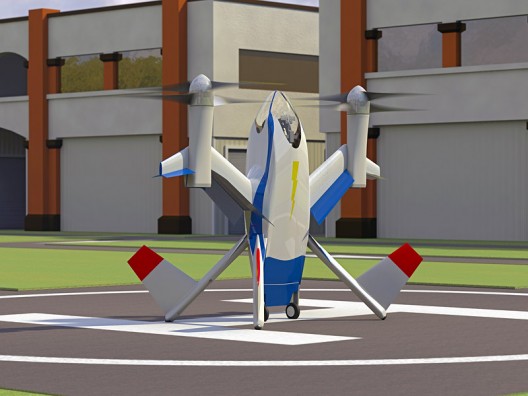 She ends with an overview of Dr. Mark Moore’s Puffin, detailed in this blog in January.  After explaining that a commuter using the Puffin would rise relatively noiselessly out of his or her back yard, Weinberger turns to the problem of making the skies safe for the hundreds or thousands of such personal air vehicles (PAVs) that many would see as merely transferring traffic jams to a higher level.

“In Moore’s world,” she writes, “the nation’s airspace is open to unmanned aerial vehicles.  In reality, the FAA has been reluctant to allow UAVs to share the sky with airliners, sport aircraft and helicopters.  The Pentagon is leading the effort to draft the rules and define the technical standards that will open the nation’s airspace. 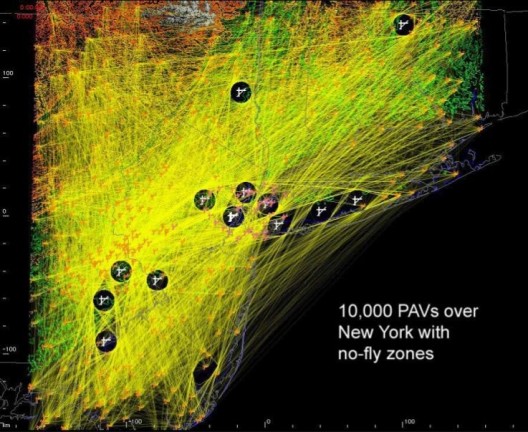 Why automated ATC will be necessary with 10,000 PAV flight operations in the NYC area daily

“Pressure is mounting to do so as federal and local agencies develop plans for using drones to monitor weather, provide tactical reconnaissance for police or conduct environmental studies.  So commuting on a Puffin would be like hitching a ride on a UAV studded with collision-avoidance sensors and wired for direct communication with other aircraft and sensors on ground infrastructure.”

Such concerns are not only important in the U. S., but in Australia, where Richard Glassock and the Smart Skies program address issues including, “The development of leading-edge research platforms, sense-and-avoid systems, the automated separation management system, the mobile aircraft tracking system, development of simulation capabilities, and research into the development of UAS regulations and risk management.”  Glassock, more than incidentally, is expected to address these concerns in a presentation at the fifth annual Electric Aircraft Symposium in Santa Rosa, California in April, 2011.

These reflect the requirements for making American skies safe, a major part of Dr. Moore’s plans for aircraft like the Puffin.  He also sees a niche role for such PAVs, neatly fitted between the longest comfortable drive and the shortest practical commuter flight.  As many who have frittered away their lives in security lines will attest, a fine line exists between the hours involved in getting on a half-hour flight and the coin toss that leads to a moderately long drive, fraught with all the hazards and literal roadblocks that entails. 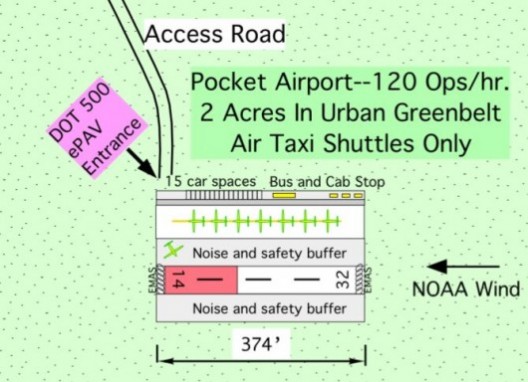 Concluding his talk at the fourth annual EAS this year, Dr. Moore showed the viral video of the Puffin lifting vertically from its “launch pad” and whisking its commuter pilot to a destination.  Not all PAV’s will be vertical takeoff and landing (VTOL) capable, however, and Dr. Brien Seeley, President of the CAFE Foundation, posits the pocket airport as a means to accommodate short takeoff and landing (STOL) PAVs.  As shown in Gizmag’s coverage of Dr. Seeley’s talk at the recent Future of Electric Vehicles conference, these miniature flying fields could serve as a launching point for dozens of daily commuters. 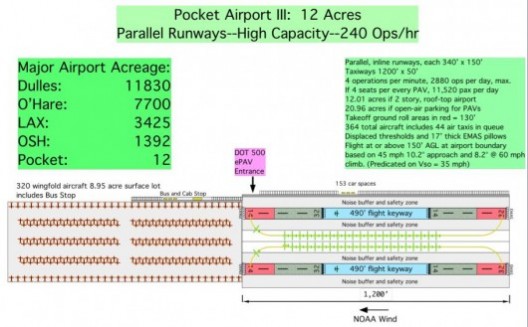 Neighborhood acceptance of either a personal liftoff from one’s own back yard or mass sorties from a nearby mini field requires a type of quiet electrically-powered craft that will radically change the face of private aviation.  The supporting infrastructure will require equally radical rethinking of the rules of the air.

Drs. Seeley and Moore often seem to be tag-teaming the subjects of PAVs and how they will safely navigate future skies.  Their continued alliance on these fronts could eventually lead to alleviation of the gridlock we now experience on the ground and in the air, and give us even greater personal mobility as we conveniently, quickly and quietly reach our destinations.