Phil Barnes, aviation consultant, opened each days’ sessions at this year’s Electric Aircraft Symposium: on Friday with a talk on dynamic soaring as taught by the birds, and on Saturday on regenerative power to keep a dynamic soaring aircraft in perpetual flight without any outside energy source other than the sun.

Phil has 31-years of experience in the performance analysis and computer modeling of aerospace vehicles and subsystems at Northrop Grumman. He has been to Antarctica twice to photograph and study the flight dynamics of the Albatross, lessons he applies to the ideals of dynamic soaring and energy retrieval in flight.

His Friday morning talk, “How Flies the Albatross,” discussed the flight mechanics of dynamic soaring, that mode of maintaining or gaining altitude from horizontal wind gusts, something the albatross uses to fly huge distances searching for food for itself and its family.  From the observations of well-known naturalists, he showed the bird “could soar against strong winds without a beat of its wings (Jacques Cousteau), something elaborated on by David Attenborough and first attested to by Isaac Newton (1725) and Lord Rayleigh (1883).

Barnes reports on his web site, “The albatross travels overall downwind faster than the wind. Indeed, the albatross circumnavigates Antarctica several times per year, in as little as 46-days per trip. Only with dynamic soaring can the albatross fly so fast and far.”  Going into the wind, the Albatross ascends into an increasing headwind, the essence of dynamic soaring.  With the boundary layer over the ocean an estimated 250 feet thick, these birds have more than enough “ceiling” in which to explore dynamic exploitation of the vertical gradients of a horizontal wind. 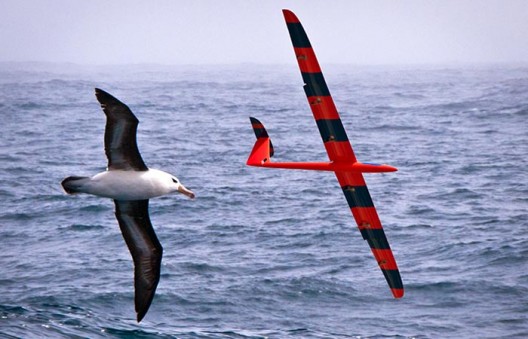 Others are thinking along the lines Phil Barnes discussed in his EAS talk.  Oceanographer Phil Richardson created this “conceptual illustration of a robotic unmanned aerial vehicle soaring over the ocean, taking advantage if the same physics that an albatross does to fly fast and efficiently.” Photo: Phil Richardson, Woods Hole Oceanographic Institution

Barnes illuminates the physics of dynamic soaring with a simple explanation – riding with a model airplane in a car with a sunroof.  “Let’s say we are driving our car at 90 km/hr with the moonroof open. Just beneath the moonroof we hold a model airplane. Although the model at this point is traveling at 90 km/hr it has no airspeed, and thus no usable kinetic energy, relative to the air in the car. Were we to let go of the model it would fall to the floor of the car. If, however, we were to raise the model just above the moonroof, it would suddenly gain 90 km/hr. of airspeed and the corresponding amount of kinetic energy. Once released, the model would convert its newfound kinetic energy into potential energy by climbing high in the sky.”

He uses dynamic soaring force diagrams, showing direct quantitative proof of Lord Rayleigh’s qualitative descriptions of the phenomenom, and explains the three orthoganal accelerations showing that Newton’s laws are applied in the bird’s soaring flight.  Including factors such as turn rate and modulated thrusts adds up to a complicated nine factors that help determine the success of the bird’s efficient exploitation of horizontal wind currents.

An albatross deals with this complex math and does something that would have driven our flight instructors wild – it holds its head level with the horizon, keeping its “sensor platform” constant with the plane of the horizon.  Phil notes that his simulation program (which readers can try out on Phil’s web site) keeps the head of his idealized bird level, something of which he is quite proud.

Phil concludes that wind gradients, not waves; and airspeed, not groundspeed, make dynamic soaring possible.  This type of soaring makes net progress in any direction – something the Albatross has mastered in its 50 million-year journey to perfection.

In the second-day opener, Phil was back to show the strong relationship between his studies of Albatross flight and the potential of regenerative flight, something that would enable nearly perpetual flight using electronics technology similar to that used on cars such as the Toyota Prius. 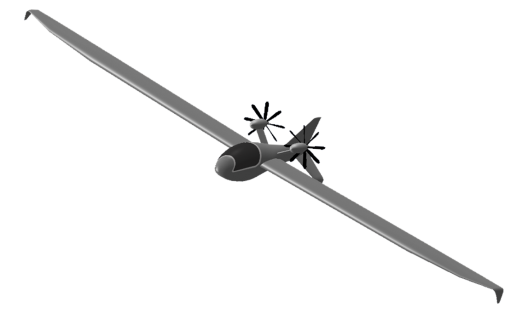 Phil Barnes Regenosaur, taking inspiration from the Albatross and the Toyota Prius

His Regenosaur comes from observation of Albatross flight, simulation of dynamic soaring and the thoughts of aerodynamicists such as Hermann Glauert and Paul MacCready, including Glauert’s early thoughts on wind turbines and ridge lift, and MacCready’s speculations on the possibilities of regenerative flight.

Barnse’s windprop combines the functions of a propeller and a wind turbine, and must be carefully designed to work in pinwheeling mode and derive the most thrust from a propeller based on the “Betz conditions,” named after A. Betz, who theorized minimum energy losses from lightly-loaded propellers as early as 1919.  The windprop would have eight blades carefully set for blade twist to satisfy Betz conditions, and drive a brushless motor/generator that could provide thrust, and then feed energy back to the aircraft’s batteries through a “six-pack” inverter-rectifier designed for efficient regeneration, actually amplifying the effects of the windprop.  These ideas are more fully explained in Phil’s presentation on his web site.

As always, Phil Barnes gave a thorough and challenging analysis of how to learn from nature and apply those lessons to a promising approach to perpetual flight.