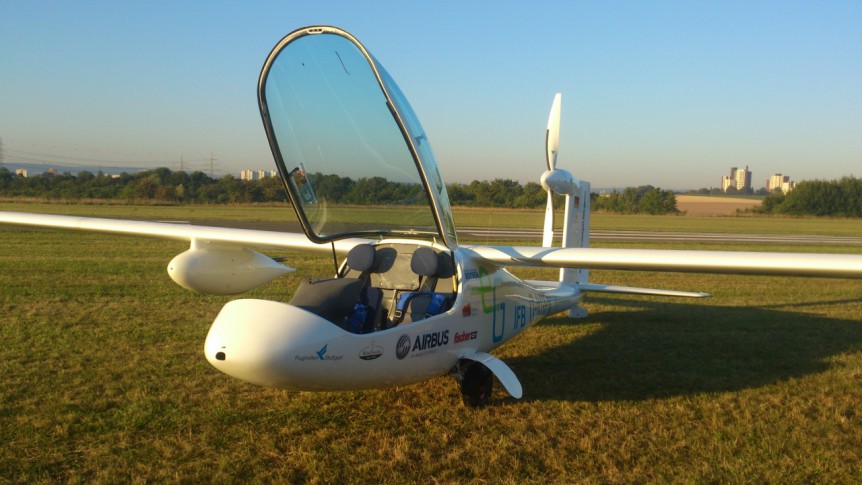 Dipl-Ing* Ingmar Geiß, Deputy Project Manager for e-Genius with the Institute of aeronautical engineering at Stuttgart University shared the news that e-Genius flew with its range extender for the first time on September 15.  He notes that while the battery-powered airplane can manage trips up to 300 kilometers (186 miles), the hybrid engine/generator pod will enable flights up to 1,000 kilometers (620 miles).  This would equal a trip from Stuttgart to Barcelona, Spain, according to the e-Genius web site. 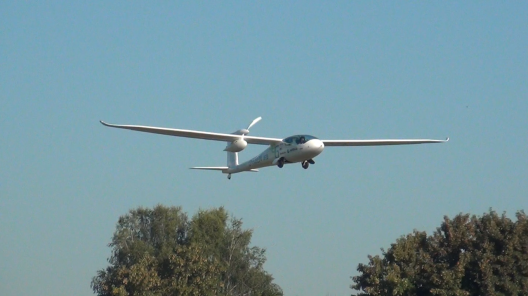 e-Genius gains altitude before turning internal-combustion engine on, avoiding noise complaints (not that there would be any)

As the school explains, “With [the] e-Genius hybrid most flights of a typical user case can be done in the cost and energy efficient battery mode – for all longer flights the range extender can be used.

Generator system control requires no pilot input, everything being done automatically.  If the pilot wants to set down at the end of a trip with a certain amount of battery energy on board, e-Genius has an ingenious “look-ahead” feature to modulate the battery to achieve the desired level at the end of the flight.

Already recognized as one of the quietest aircraft on record (56-62 dBa in the 2011 Green Flight Challenge), the hybrid craft takes off on battery power alone and switches the engine generator on when the airplane achieves cruise altitude.  This type of strategy makes e-Genius a good neighbor.  As Ingmar reports, “The system left an excellent impression – additional noise in the cockpit was barely hearable. So we could still enjoy our silent electric aircraft and didn’t have to use headsets.” 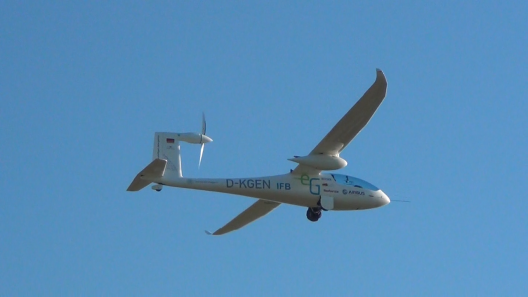 Engine/generator package on right wing can be easily attached, detached

The blog described the hybrid engine/generator pod last year, a compact Wankel engine powering an equally compact generator while consuming only five liters per hour of fuel.  Cruising at over 100 mph, the airplane would use only one liter per 20 miles at about 75-percent power (for the engine/generator), or 1.3 gallons per hour.  Fuel consumption would doubtless go down at lower generator outputs.

Because Wankel engines tend to be thirsty, estimable reader Howard Handelman sent an excellent critique of last year’s entry, including compromises in battery-pack size, different approaches to controlling fuel usage and getting the most out of a hybrid-package. 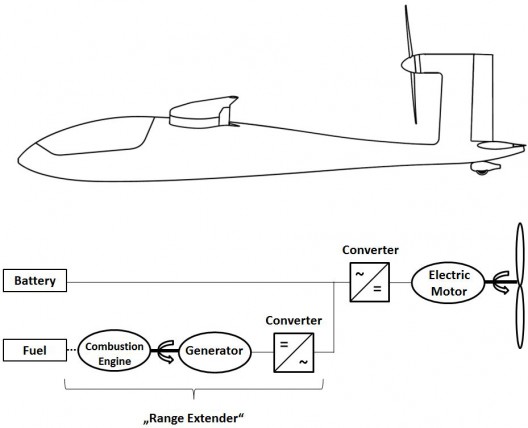 How it works – controller makes operation of internal combustion engine, electric motor transparent to pilot, with software managing the details

Another German product, the BMW i3, has a range extender that allows one to run beyond low battery range.  One owner apparently does a lot of local driving and uses only battery power for most of his commuting.  “However, I have to admit, I thought I’d need to use the range extender more than I actually have. Of my 56,000+ miles, only 1,925 miles have been with the range extender running. I’ve bought 50 gallons of gas (I kept records) and averaged 38 miles per gallon while the range extender was running, just slightly less than the EPA rating of 39 mpg. 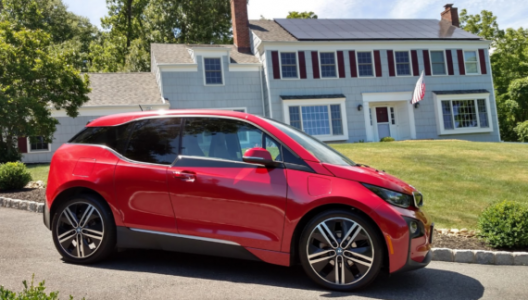 Tom Moloughney’s 1,000 mpg BMW i3. It used less gas than he drinks in coffee per month, and less than his gardner’s tractor burns mowing his two-acre lawn each year.  Charging at home comes from the solar roof on his house

“But just how little gas is that? Well, as I’ve said, I’ve owned the car for 27 months now, so that averages out to me needing to refill the tiny 1.9 gallon gas tank about once every month — I drink more coffee than that in a month! However, refueling hasn’t been nearly that regular. I’ve gone stretches of four or five months at a time without needing to buy gas. But I’ve also taken the car on a couple of road trips of two or three hundred miles where I needed to refuel three or four times in the same day to complete the journey. In fact, the majority of my REx miles were accumulated on long trips. These trips simply wouldn’t have been possible in an i3 BEV, as charging infrastructure is only now becoming available along the routes I’ve traveled.”

Such strategies will be the source of endless speculation and controversy until batteries become energy-dense enough to allow what drivers consider “normal” trips without recharging.  Aircraft designers and builders will then have access to power sources that will allow long flights and great performance – something fairly elusive thus far except for rare aircraft such as e-Genius.

The e-Genius fuel tank holds 100 liters, so at 5 liters an hour, 16-hour flights (with reserve) would be possible – too much for any rational need other than record breaking.