Besides saving “around $2.8 million in airline fuel costs,” the conversion will reduce greenhouse gas emissions around 10,000 tons per year.  Alaska Airlines will swap 204 fossil-fuel burning GSEs to electric and its partner Horizon Airlines will trade in 58.  More airlines are going to join the program later this year.  Federal grants and funding from the U. S. Department of Energy (DOE) and the Federal Aviation Administration (FAA) sweeten the transition for participants.

“This project provides the infrastructure for airlines to convert their vehicles from diesel to electric in Sea-Tac’s effort to become the first major airport in the US to provide charging stations at all gates,” said Courtney Gregoire, Co-President of the Port of Seattle Commission. “As many as 650 vehicles could eventually be covered by electric technology and make a huge difference to the airport’s carbon footprint.” 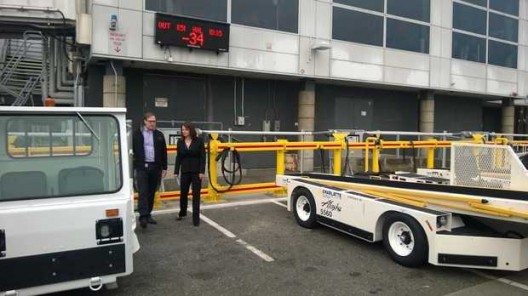 Yellow “charging corrals” flank the airport’s “C” and “D” concourses, with 296 plug-in fast charging stations available in the first phase of the project.  When completed, the installation will total 576 such stations.

Most electric GSEs can run about two and a half days without recharging, and take advantage of lulls in airport activity to “top up” their energy levels.

The Tacoma, Washington News Tribune reports the conversion to electric ramp vehicles is part of a larger program to cut fossil-fuel use at Sea-Tac.  Last year, for instance, the airport installed a central conditioned air system “ that ended the practice of aircraft running their jet-fuel-powered auxiliary power units at the gate to keep the planes’ interiors heated and cooled while they are being loaded and unloaded.”

“Instead, the aircraft are connected with flexible ducts that provide heated or cooled air directly to the planes’ interiors from the airport’s central heating and cooling plant. That program is saving airlines about $15 million in fuel costs and 40,000 tons of emissions annually.”

That and “’the airport’s new fleet of compressed natural gas-powered buses serving its rental car terminal and its high-efficiency hybrid or CNG taxis have made Sea-Tac one of the nation’s most environment-friendly airports,’ said airport director Mark Reis.”

Jeff Butler, Alaska Airlines’ vice president of airport operations and service, noted that, “At first there was some skepticism, but these vehicles have proven themselves in snow and rain and every weather condition,” and are now a hit with airline employees and ramp workers.

According to the paper, “Dave Soike, Sea-Tac’s director of facilities, said other airlines including Southwest, United and Delta have expressed interest in converting their ground fleets to electric power.”

Even the airport garage have 48 electrical vehicle recharging stations, “the most of any North American airport,” according to Sea-Tac officials.  The airport does not charge for charging, incorporating that in its normal parking fees.  Sea-Tac hopes to fund an upgrade to 220 Volts for these now somewhat slow charging stations.

With wheel drives finding their way through their various countries’ certification systems, electric ground support will play a vital part in helping reduce the fumes around airplanes on ramps at major airports.  Passengers will welcome the clean air.