Taking off at approximately 10:00 a. m., Rauck flew a smooth circuit of the Pitt Meadows airport, southwest of Vancouver, B. C.  The pair have been bench and ground testing their Electravia motor, controller and battery pack as part of their creation of eUP, a firm dedicated to making electric flight possible in ultralight aircraft.

In eUP’s press release, McClintock says, “This is a very exciting day in Canadian aviation history. While eUP will offer this system on other aircraft, right now the state-of-the-art in electric flight is a perfect match for self-launch soaring gliders such as hang gliders and paragliders. eUP is proud to be the first to fly on battery-power in the country.”

While technically not the first electric flight in Canada, that honor taken by Csaba Lemak with his powered parachute in 2006, “This,” according to eUP, “is the first flight of a Canadian manufactured electric aircraft, and eUP contends it is also the first electric aircraft flight in Canada.  eUP will be demonstrating the aircraft across western Canada and the United States early in 2013, and expect interest to be high in the Green1.”

Rauck and McClintock, both licensed private pilots with 35-year aviation backgrounds, were motivated to “create an affordable, fun, environmentally-friendly aircraft with a clean, smooth and quiet flight experience.  The YouTube video shows that they accomplished their objectives, with a very quiet, smooth turn around Pitt Meadows.

They look forward to soaring their creation, a combination of North Wing trike and a Solairus 17 wing chosen for its good sink rate and portability.  They used Electravia’s GMPE 102 motor, an E-Prop, and a proven set of components, including Electravia’s 53-Amp-hour (4 kilowatt-hour) Kokam battery pack. 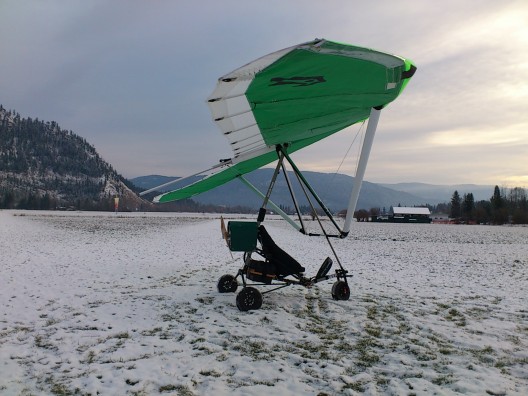 eUP’s electric trike with Solairus 17 wing in a pretty, but cold setting

eUP announces that it will be named the North American distributor for Electravia products, broadening the market for Anne Lavrand’s products and probably helping develop new platforms for electric flight.

As John points out, “Being soaring pilots, we crave more performance … but what is out there in production runs for ultralight sailplanes?  Nothing comes to mind!”

Seeking to overcome that, the partners are looking at the Atos hang-glider, a high-aspect ratio wing with excellent soaring capabilities, “two excellent-looking trikes that have recently emerged from the testing phase,” powered paraglider trikes, and possible conversion of a Moni they have in the yard.  John says it’s, “Not a very original idea,” but looks forward to learning from it.  Even a two-seater is possible in the future.

For the near future, though, “Randy will be in charge of sales and marketing while I continue with product development.”  We wish them luck.