Great minds tend in the same directions.  Newton and Leibniz both came up with the calculus at roughly the same time, both goaded to develop a way to determine the orbit of Halley’s Comet.  So it’s no surprise that two different groups would come up with similar solutions to developing a backup hybrid system for light aircraft.  Within weeks of one another, Spain’s UC3M and Israel’s Ashot Ashkelon both unveiled add-on hybrid systems for Rotax engines. 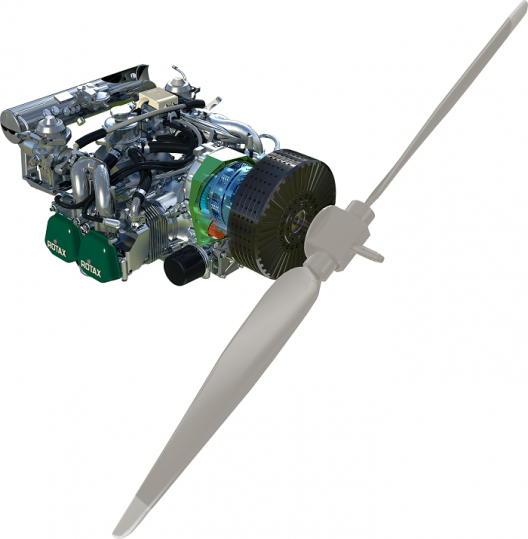 Similar to the Madrid University’s design, Ashot Ashkelon’s system includes a new propeller shaft, a new gearbox developed by Ashot, a DC/AC power converter and controller, and a “light, permanent-magnet synchronous electric motor acting as motor-alternator, coupled to the new shaft.”  Efesto reportedly supplies a “high-capacity lithium-polymer battery with power management system for power storage.”  Another source credits Efesto with the electric motor also, although it looks a great deal like an Emrax product and similar to the unit on the UC3M system. 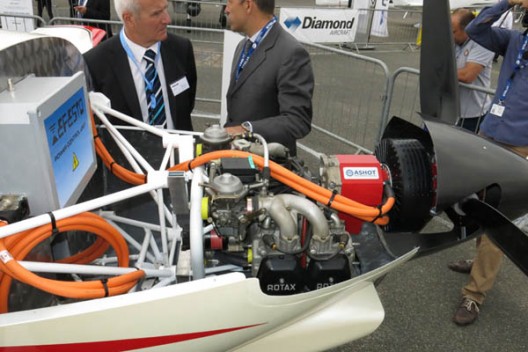 The 30 kilogram (66 pounds) HPS can operate in piston engine mode only, or in coupled piston engine/motor mode for extra power to shorten takeoffs and increase climb rates.  One intriguing option can cut off the piston engine to operate in “silent mode” flight – something Israeli defense planners may find useful for unmanned aerial vehicles (UAVs).  Another option allows the using the electric motor as an alternator for battery charging and as a starter for the Rotax.  On landing, the electric motor alone can act as a thrust reverser for extremely short rollouts.  Electric propulsion only in the air, “provid[es] active vibration damping for smoother, low-level flight,” according to Aviation Week. 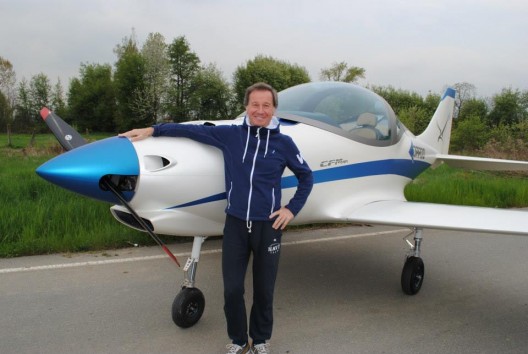 At this year’s Paris Air Show, the HPS debuted on a hybrid version of the Dardo light aircraft from CFM Air.  Whereas the Madrid system provided up to 20 kilometers or approximately 12 miles for the pilot to use electric power to find a landing site in the event of engine failure, Ashot’s system gives an attention-focusing six minutes (which might be 12 miles at the Dardo’s cruise speed).  The system serves as an optional safety measure and theoretically replaces an emergency recovery system – although it really wouldn’t be a great help in the event of a structural failure.

Kate Sarsfield with Flight Global reports that former Italian astronaut and Eurofighter test pilot Maurizio Cheli designed the carbon fiber aircraft.  A sleek looking aircraft in either 450 kilogram (990 pound) or 600 kilogram (1,320 pound) form, it looks great flying over northern Italian lakes near its home base near Turin, Italy.  An extra six minutes to reach shore would be reassuring at the low altitudes flown in the video.

Efesto explains, “The HPS is designed as an add-on kit for the Rotax 912/914 engines and eventually be available to all aircraft powered by these models.” Looking toward a wider market, they add, “We would also like to apply this technology to engines in the Continental and Lycoming families as this would open up the huge certificated general aviation aircraft market to us.”