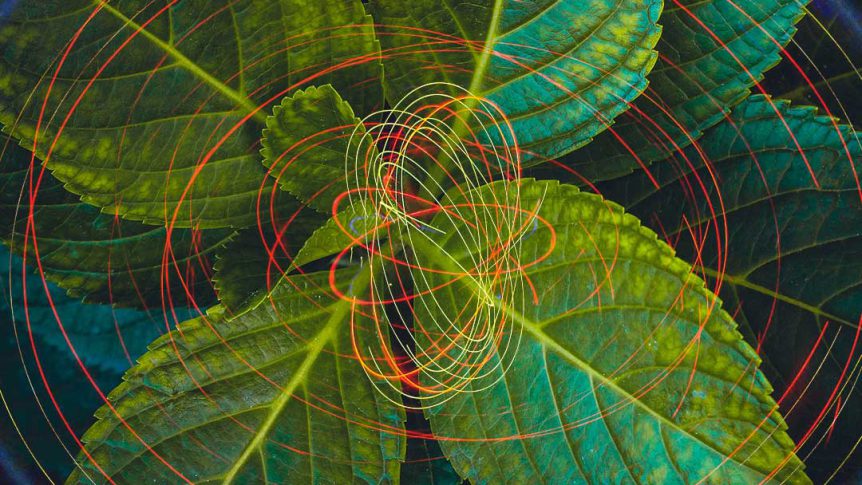 Futurism  ponders, “Sugar, Light, And A New Type of Chemistry — What It May Take To Wean Us Off Fossil Fuels” in an article by Dan Robitzki.  The topic brings a new term into your editor’s vocabulary – BioLEC – Bioinspired Light Escalated Chemistry.  The goal of such chemistry is to use the energy of two photons, “the tiniest quantifiable units of light, to power chemical reactions.”  This takes us into how trees and other photosynthesizing plants use quantum theory to make things grow.

Trees Have Been Doing it For Years

It’s a bit odd to think of trees and quantum physics in the same sentence.  Your editor used to think of sunlight striking leaves and chemistry taking place in a leisurely way inside while the tree or bush grew.  It turns out that things take place at light speed inside the tree, with quantum activity in abundance.

Researchers have tried to outdo Mother Nature with artificial leaves.  One of the early proponents of this approach, Daniel Nocera of Harvard claimed ,“This hybrid microbial | artificial leaf system, called the bionic leaf, operates at unprecedented solar-to-biomass (10.7%) and solar-to-liquid fuels (6.2%) yields, greatly exceeding the 1% yield of natural photosynthesis.”  He and his partner, Pamela Silver, continue to expand that potential.  Other researchers such as Nathan Lewis at CalTech, have their own programs with varying means of using enhanced photosynthesis.

To further such research, the U.S. Department of Energy set aside $100 million this year to fund 22 new Energy Frontier Research Centers (EFRC) and renew several others. One of them, a new lab at Princeton University, is slated to receive almost $11 million over four years.  Their team is attempting to power the world with plants and industrial waste.

Gregory Scholes, a Princeton chemist and the Director of the BioLEC project, thinks that we can achieve that by using BioLEC to duplicate what happens inside a leaf in the laboratory – and then control the process to gain desired outcomes.

As reported in a Princeton news item, “Under the leadership of Gregory Scholes, the William S. Tod Professor of Chemistry, the research center will seek to ‘employ light harvesting and advances in solar photochemistry to enable unprecedented photo-induced cross-coupling reactions that valorize abundant molecules.’  The center aims to revolutionize chemist’s ability to make new molecules, fuels, and materials by using the collective energy of two packets (quanta) light to break and make strong chemical bonds. A new range of chemical building blocks will be picked apart, aided by the sun’s energy, and crafted into new structures with valuable functions.”

Carbon-based substances such as sugar or alcohol, according to Futurism, “Contain a chain of carbon atoms connected to an oxygen atom and a hydrogen atom (OH).”  Apparently the bonds linking carbon atoms are hard to break.  adding an extra photon would weaken that bond.

Robitzki explains, “If we could break down those bonds, we could create jet fuel, which is another molecule mostly made up of carbons. On paper, it seems easy to get from alcohols to fuel — just link the carbons together in a certain way and discard the oxygen atoms in the form of pure water.”  Making jet fuel, however, requires the added energy of a second photon to break all the bonds.  Right now, that’s too hard for “even the  most advanced scientific tools we have.”

This Takes a Special Kind of Sharpshooter

That extra photon would have to hit a catalyst, striking it “With…  a very precise amount of energy at the exact right time to the exact right part of something that’s too small to see. There’s so much precision required, in fact, that no one has been able to figure it out.”

Starting with things abundant in nature, including light itself, and making fossil-free fuels without going through the messy and dangerous processes those involve would certainly be a blessing to the planet.  Robitzki speculates that if we can extract jet fuel from sugar cane, we should be able to use the same techniques to extract useable products from industrial waste or garbage.  He sees this as a way to drive down the cost of energy and “Get rid of the carbon emissions that come from burning these fuels once we have them.”

Scholes says, “We think our research will work because nature uses similar principles in photosynthesis.  It sort of sounds simple. ‘Oh, absorb light twice.  It’s a lot more difficult than that. We have all sorts of strategies, and that’s why it takes all sorts of people.”

Scholes and his team also have  the  Laser Electron Accelerator Facility (LEAF). Located at Brookhaven National Laboratory, one of two facilities in the country…  capable of a technique called pulse radiolysis that might just break those carbon bonds — and that new field of chemistry — wide open.”

If Big, Dumb Plants Can Do It…

Shooting  powerful, extremely short-lived bursts of electrons through the molecules being studied. LEAF observes the resulting reactions.  “These electron beams collide with and energize the molecules, which triggers chemical reactions that break and form new, powerful bonds between the atoms in that molecule.”

The BioLEC team observes the billionth-of-a-second reactions, and study the intermediate steps of that reaction.  They will somehow observe “all of the various structures and shapes that the molecules assume as they respond to the added energy, as Matthew Bird, a chemist at the Brookhaven National Lab who works at LEAF, explains to Futurism via email.”

The article concludes, “It’s a daunting task. In such early stages, it’s impossible to know whether or not Scholes and his team can accomplish all their goals in just four years. But he is optimistic that they can do it. After all, the underlying science already exists. If a whole bunch of big, dumb plants can figure out how to absorb a second photon, why can’t we?

“’It is super exciting, actually, to think about what we could achieve, and to bring colleagues and people together to do this,’  Scholes says. ‘I think what’s exciting to me is there’s gonna be some real high-impact science along the way. This is not incremental work.’”