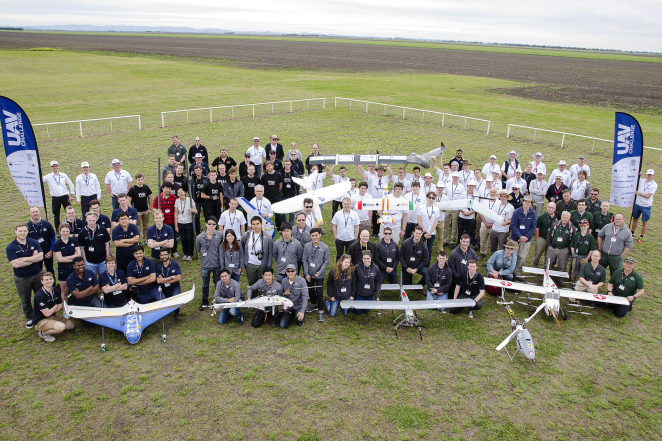 Outback Joe goes through a lot of trauma in his overstuffed life.  This literal straw man gets tossed into some remote part of the Australian outback every year and waits for some kind of rescue.  This usually comes by air, drones searching for him and taking him medicine, food, water, or some other necessity.  That’s the Outback Challenge. 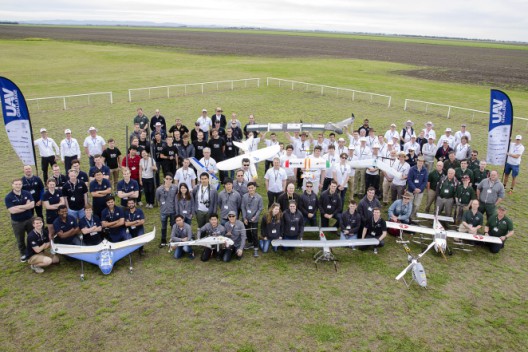 Ten teams began competition, not all finished. It’s tougher than it looks

One can see a condensed history of the competition from its inception in 2007 to today on Wikipedia, the entry including the different kinds of things Outback Joe needed for a mission to be successful.

This year, however, competitors were supposed to bring back a reminder of their visit to Joe – a blood sample – a good trick from an inanimate being who might answer to “Hay!” 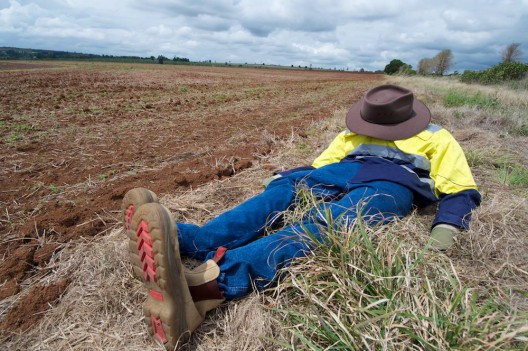 Outback Joe during 2014 UAV Challienge, definitely in need of a pint (of water)

Richard Glassock, now a Research Fellow at the Institute for Aerospace Technology, the University of Nottingham, describes the vision and how it has grown up.

“The competition Rod Walker and I first discussed about 16 years ago has matured into something really worthwhile. We ran the first one in 2007, and the most recent event realizes much of the initial vision. Originally I wanted to deliver pizza and beer, but the medical emergency rescue theme is clearly of more immediate value.”

According to DroneMagazine.com, ten teams qualified for the event:

Richard reported on the progress for the event, with Day One devoted to scrutineering the ten entries, assuring that all participants met the requirements for the event.  The Ars Numerica entry from Poland, the Jet Stream, was held up in customs and passed technical review the next day.

Following are three videos of the checks necessary to assure smooth running (fate aside) for a successful Outback run.  The first shows the Canberra effort, the second the Monash, and the third the Polish JetStream.  All are serious machines with extremely smooth control when left to their own autonomous ways.

Seven teams made the retrieval attempt (out of the eight that made it through tech review). Richard summarizes Day Two here: “There is one more day to run, but so far it appears Canberra UAV has again led the field by utilizing a Quadrotor Fixed Wing VTOL to fly the cross country mission, autonomously land, and return with the medical payload. I have always considered this to be a most viable and versatile configuration. They would have fully completed the mission and collected the $50k prize money again this year, had their relay communications platform not suffered an engine failure. The gas powered helicopter had to make an autorotation forced landing. Perhaps a hybrid-electric powerplant would have provided the necessary power and endurance while giving sufficient redundancy to complete the mission? In any case, it was an excellent and successful result overall demonstrating the utility of these systems for real world humanitarian applications.”

ISAAC UAV of Kasetsart University from Thailand fielded a helicopter, which unfortunately began smoking just after spotting Joe, and suffered damage in a heavy landing.

Two Perth, Australia teams came afoul of the geofencing that marked aerial boundaries, and flying outside the lines disqualified one of them.

Delft Technical University’s Delftacopter – which the team described as a “Delta-wing Electric Longrange Transitioning Autonomous Helicopter” showed great promise, looking a great deal like JoeBen Bevirt’s power kite systems of five years ago.  Fate intervened during a good run, though, and Delftacopter was snared in a very tall tree.

Competitors could use a kind of “tag team” approach, fielding one craft as a spotter and the other to retrieve Joe’s sample.  Monash University had a helicopter to speedily find Joe, but that lost power and autorated to a punishing landing.

The UAV Challenge site reports on the final day.  “Canberra UAV were clearly first on points but did not complete the Challenge as their support aircraft crashed at the farm. But they did return the blood sample and this was a massive achievement and something that the organizers had not expected in the first running of the Medical Express event. Congratulations to them.”

Delft had perhaps the most dangerous part of the mission, retrieving their aircraft from that very tall tree.  “MAVLab TUDelft came second using their very new type of aircraft – the Delftacopter. They even managed to recover it from the very high tree at the end of the flying day yesterday, and so they were quite happy.”

A related event, the Airborne Delivery Challenge, open to high school teams, had a good number of entries and a variety of innovative approaches. 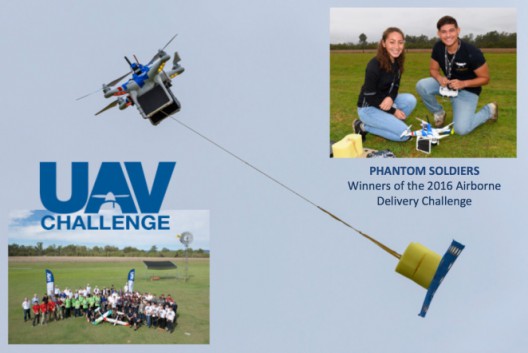 According to the organizers, “Phantom Soldiers, a team from the Knight High School in Palmdale, California, has won the 2016 Airborne Delivery Challenge and $5,000. It was a great contest but the accuracy of Phantom Soldiers’ drops was incredible and they won by more than 10 points. All three of their medical packages also landed next to Outback Joe with an impact force under 75G (the requirement to gain maximum points). It seems that their innovative drop mechanism and packaging were one of the secrets of their success.”

The level of creativity and competitiveness shows the ongoing progress in airframe design, sometimes complex power design, and a growing capability of autonomous controls.  It might be only a few Outback Challenges away before we see Joe airlifted to safety, while enjoying a slice of pizza and a pint of Foster’s Lager.