On December 21, 2011, Samy Dupland test flew Electravia’s latest adaptation of its electric power systems.  The Electrolight 2, a Fauconnet A60 on which Electravia head Anne Lavrand and Dupland mounted their 26 hp motor and power pack, is a French version of the Scheibe L-Spatz (Sparrow) standard class sailplane. 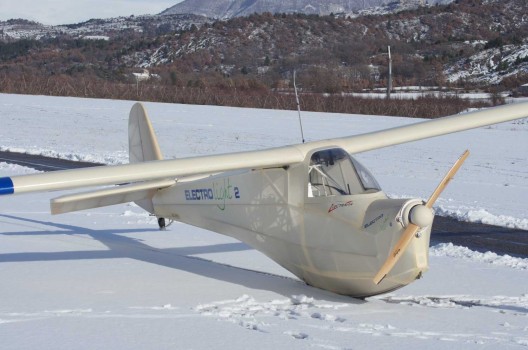 Fauconnet A60 with Electravia power package

With a 5.55 kilowatt hour lithium polymer battery pack, the electric microlight glider can stay up for one hour, 45 minutes or gain up to 3,000 meters (9,842 feet).  Its cruising speed is between 100 kilometers per hour (62 miles per hour) and 150 km/h (93 mph), with its range doubtless dropping at higher speeds.  Its maximum weight is 315 kilograms (693 pounds) with a recovery parachute, right at the limit for French ultralight rules.  Electravia sells the complete system of electric propulsion (motors, controller, batteries, instruments, propeller), and provides integration of the system into light sailplanes like the Fauconnet.

Several vintage sailplanes could be easily adapted to such a system.

Electravia’s blog reports a cost of half-a-Euro (65 cents) per charge, certainly a low fee for a sailplane launch, and certainly more independent in operation than waiting for the tow plane.  Charge times vary from 1 hour, 10 minutes for the smallest battery pack to 2 hours, 40 minutes for the largest on a single-phase power line and from 40 minutes to 1 hour, 20 minutes on a three-phase line.

A traditional 1960’s soaring vehicle, the Fauconnet has a steel-tube fuselage, wood wings, and a translucent fabric covering.  The 34 kilogram (74.8 pound) battery pack is the largest of three available and limits pilot weight to 86 kilograms (190 pounds).  Smaller packs allow shorter climbs and limited duration, but allow for pilots up to 106 kg (233 pounds) while supporting limit loads of +4 g and –2 g and maximum loads of +6 and -3 g.

The instrument panel, despite its steam gauges, sports an OLED E-Screen that shows battery discharge, motor temperature, motor current, battery current and voltage, and that records all data on an SD card.

Electravia’s package enables a soaring pilot to convert a relatively inexpensive sailplane to self-launching status and fly independently at very little cost.  This makes the idea highly attractive and should help spread the idea of electric flight to a new audience.