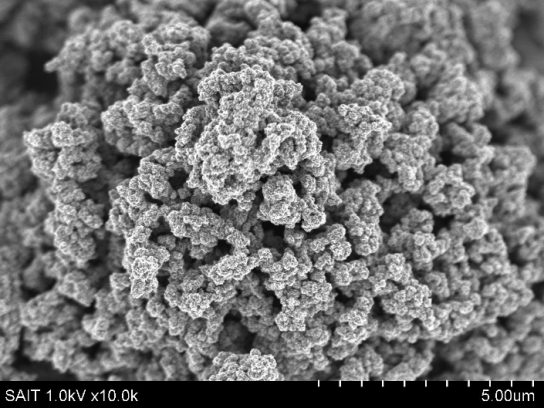 Graphene is fascinating stuff, with tons of promise.  Whether it can produce usable results for energy storage is still an open question. But Samsung and a startup called Real Graphene may have at least a start in that realm.  GAC, a Chinese auto firm, seems to be promising batteries before the end of what is left of this year.  There may be hope in the midst of a dark winter.

In 2017 a team of researchers at the Samsung Advanced Institute of Technology (SAIT) developed a “graphene ball,” promising  a 45-percent increase in capacity, and five times faster charging speeds than standard lithium-ion batteries. Hoping to power mobile devices and electric vehicles, SAIT collaborated closely with Samsung SDI* as well as a team from Seoul National University’s School of Chemical and Biological Engineering.

*Not a simple abbreviation, SDI stands for “Samsung with the initial letter S, ‘Display’ and ‘Digital’ with D and ‘Interface’ and ‘Internet Component’ with I.”  This may not be the cleanest job of corporate branding ever.

Regular lithium batteries in vehicles can take considerable time to fully charge.  “Topping off” the batteries at home from a 120-Volt outlet can take days to fully charge a long-range vehicle such as a Tesla.  According to Samsung, “In theory, a battery based on the “graphene ball” material requires only 12 minutes to fully charge. Additionally, the battery can maintain a highly stable 60 degree Celsius temperature, with stable battery temperatures particularly key for electric vehicles.”

Graphene balls mix affordable silica (SiO2) with mass synthesized graphene, and used these popcorn-ball-like spheres as both the anode protective layer and cathode materials in lithium-ion batteries.  Despite the increased charging capacity, reduced charging time (as low as 12 minutes for a full EV charge), and stable temperatures throughout all operations, we haven’t seen much from Samsung since 2018 on the subject.

Disappointing, since Dr. Son In-hyuk, who led the project on behalf of SAIT, had higher hopes for the potential outcome.  “Our research enables mass synthesis of multifunctional composite material graphene at an affordable price. At the same time, we were able to considerably enhance the capabilities of lithium-ion batteries in an environment where the markets for mobile devices and electric vehicles is growing rapidly. Our commitment is to continuously explore and develop secondary battery technology in light of these trends.”

Real Graphene Picks up the Ball

Promoting factors that make graphene a great material for batteries, Real Graphene produces an actual graphene battery product.  Their Power Banks, pocket-size recharging stations for other electronic devices, come in 60 Watt, five and 10 Amp-hour sizes, and in a 10 Amp-hour, 100 Watt model.  The smallest, G-Lite Power Bank, can be fully charged in 17 minutes, much faster than the two hours it takes to charge a similar unit with a conventional lithium-ion battery.

It can be recharged 1,000 times, three years’ use if fully charged and discharged daily.  At $59.95, it is in the middle-cost range for more conventional lithium-ion power banks.

Because graphene has very low resistance, there is little heat buildup in passing current through it.  This contributes to the possibility that graphene-enhanced batteries will last longer and pose no thermal runaway threat.  The company has ambitions to move on to bigger projects, including energy storage for electric vehicles.

Real Graphene’s CEO Samuel Gong met with Microsoft President Brad Smith at the Nixon Library in Yorba Linda, California.  Although Real Graphene is reserved about what was discussed, the firm hints that their power banks could be used to charge Microsoft’s Surface devices.  Or they might be directly integrated into MS devices.  Corporate clients would enable Real Graphene to accelerate research and development.

With all the promising characteristics of graphene, we’re left wondering why this isn’t a commonly available material for exciting applications.  Nanowerk reports, “One of the greatest challenges being faced today in commercializing graphene is how to produce high quality material, on a large scale at low cost, and in a reproducible manner.”

A Ray of Light?

In what looks like a hopeful sign for “graphene-enhanced” batteries, “Chinese EV maker Guangzhou Automobile New Energy (GAC) has announced that it has developed a graphene-enhanced battery for [electric] vehicles which will be available for mass production at the end of this year.”  Announced in May, GAC reported that its graphene technology can charge batteries (assuming EV units) up to 85 percent in eight minutes.

From 2014 on, Guangzhou Automobile Group started that research, focusing on the preparation and application of 3D structural graphene (3DG) material.  GAC officially announced a “super fast-charge battery.”  Since then, the company has, “…successfully completed the testing of the battery cell, module, and battery pack samples, and carried the whole vehicle for high power charging test. Plus, the battery life and safety have reached the usage standard.”

Other reports indicate the same graphene technology may be applied to hydrogen fuel-cell powered cars.  After some false starts, graphene may finally come into its own.