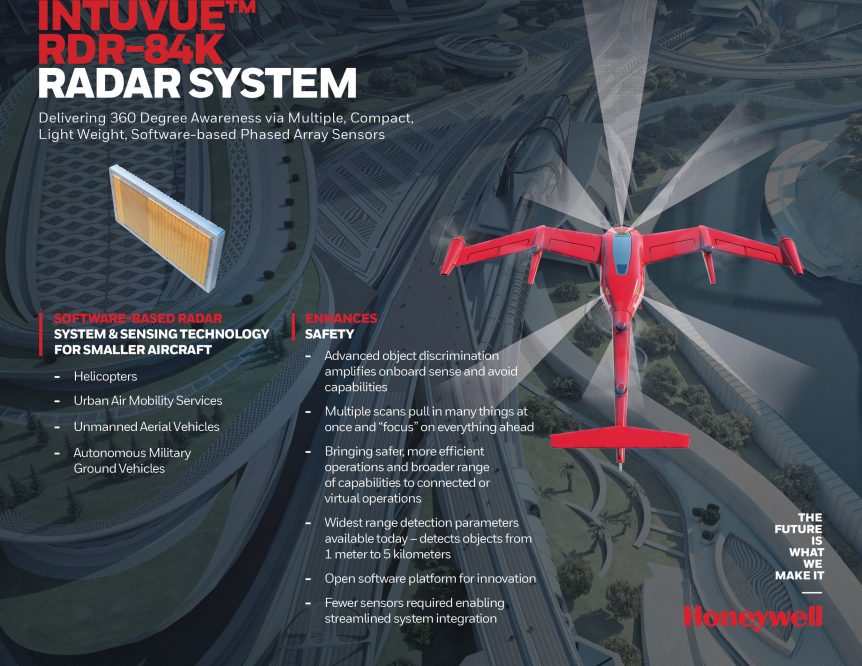 Honeywell, long involved in avionics and other aviation-related instrumentation and equipment, has created an entire, new business unit devoted to unmanned aerial systems (UAS) and urban air mobility (UAM).  If any indication is necessary to show that urban air is not a passing fad, it’s the investments being made by major entities – from Toyota to Honeywell, from NASA to Mercedes.

These systems will work for electric Vertical Take Off and Landing (eVTOL) machines or more conventional fixed-wing configurations, represented by Tine’ Tomazic from Pipistrel in the following video.

Multi-rotor craft can benefit from Honeywell’s lightweight auto-pilot and fly-by-wire systems.  Integration into the overall aircraft enables precise control and the ability to program systems and components for heightened efficiency, as shown with this Vertical Aerospace proof-of-concept vehicle.  You can find a white paper on the collaboration between the designers and Honeywell here.

Flight control passes to electro-mechanical actuators, another part of the Honeywell component lineup.  Having everything come from one source means more secure integration of those control systems and components.

Within the UAM and within the airspace in which that UAM flies, a maze of mission requirements and government regulations require the aircraft designers to integrate their craft into a complex flow of other vehicles.  That could be daunting in the not-too-distant future, with Uber, GrubHub, and Dominoes pizza deliveries competing for airspace.  Honeywell has thought about that future and launched a response.

Mike Madsen, president and CEO of Honeywell Aerospace sees UAMs and UAS’s as a vital part of Honeywell’s future.   “Urban Air Mobility and Unmanned Aerial Systems will play an increasing role in the future of aerospace, with potential applications in all-electric urban air taxi vehicles, hybrid-electric unmanned cargo drones, optionally piloted airplanes, delivery drones and everything in between.”

Honeywell has chosen a skilled entrepreneur to lead the business unit, Stéphane Fymat, who your editor knows through his work with the Perlan Project.  Perlan holds the world altitude record for sustained, unpowered flight at over 76,000 feet.  This rarified atmosphere and almost unexplored height is significantly different from the low-altitude, potentially crowded urban airspace of the UAM world.  He did, as noted in his Perlan Project biography, found “Smartplane Inc. in 2011, a company developing a semi-autonomous personal aircraft.”  That experience will help him integrate well with his new business unit.

“Stéphane has 25 years of experience in the aerospace and computer industries. He began his career as an engineer for Aerojet-Electrosystems, now a subsidiary of Northrop Grumman Corporation. At Wang Laboratories, he was part of the founding team of its document imaging software business unit which grew from $0 to $50M in 3 years, when it was carved out and sold to Kodak for $260M. He then joined cyber-security company Passlogix as Vice President. As part of the executive team, he lead the company from start up to mature market leader with #1 market share and 20M licenses sold to the largest companies worldwide. Passlogix was acquired by Oracle. He founded Smartplane Inc. in 2011, a company developing a semi-autonomous personal aircraft, and is its Chief Executive Officer. He has an MBA from Columbia University and a B.S. in Mechanical Engineering and Computer Science from UCLA. He is a private pilot, and sits on the ASTM F44 committee for FAA Part 23 Certification. He has two patents issued and one pending in avionics.”

Even more apropos to the needs of the AUM/UAS world, his work with the ASTM (American Society for Testing and Materials) F44 committee will be invaluable.

“This Committee addresses issues related to design and construction, systems and performance, quality acceptance tests, and safety monitoring for general aviation aircraft (also known as Part 23) that is less than 19,000 pounds and 12 passengers.”

It will be fascinating to see how Stéphane will expand his horizons and those of his employer in coming years.  Best wishes to all.