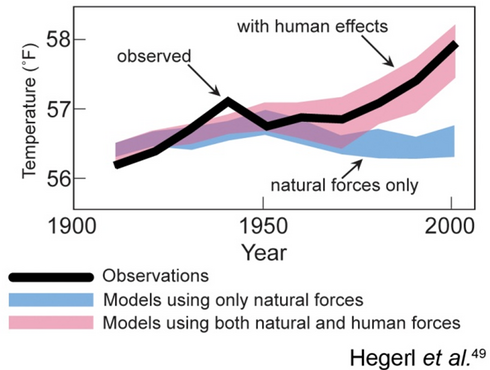 Dr. Benjamin Santer is a renowned climate scientist, leading the Intergovernmental Panel on Climate Change (IPCC) when it won the Nobel Peace Prize (along with former Vice President Al Gore) “”for their efforts to build up and disseminate greater knowledge about man-made climate change, and to lay the foundations for the measures that are needed to counteract such change.”  The IPCC clarified the award by explaining, “The prize was awarded to the IPCC as an organization, and not to any individual associated with the IPCC.”

Even though he fought through the idea that mankind was adding to the warming trend over the last 100 years*, and risked his career at several points along the way, overall, scientists worldwide have come to agree with his assessments, with well over 97 percent of climate scientists now accepting the anthropogenic causes of atmospheric warming.

*New evidence from 25 researchers suggests human-caused warming started as early 1830 – at the beginning of the Industrial Revolution.)

In hearings last December, Senator Ted Cruz disagreed with the consensus, citing an 18-year period of reduced temperatures, using that to question the majority of the IPCC’s findings.

Dr. Santer used those hearings as the basis for his talk at the First Annual Sustainable Aviation Symposium on May 6, 2016 at the Sofitel San Francisco Bay.  As a rejoinder to the disdain he experienced from Senator Cruz, he applied the scientific knowledge he’s accumulated in over 30 years of leadership in climate science to refuting objections to anthropogenic theory.

He explained that the 18 year “cut” Senator Cruz selected for his presentation at the hearings was a “cherry-picked” sequence that taken out of context shows a period of cooling temperatures, somewhat like market analysis based on just a few weeks of quotes on a particular stock.

Santer and his co-author Carl Mears explained in their paper, “A Response to the ‘Data or Dogma?’ hearing,” “Analysts would not look at the record of stock trading on a particular day to gain reliable insights into long-term structural changes in the Dow Jones index. Looking at behavior over decades – or at the statistics of trading on all individual days – provides far greater diagnostic power. In the same way, climate scientists study changes over decades or longer, or examine all possible trends of a particular length. Both strategies reduce the impact of large, year-to-year natural climate variability on trend estimates. The message from this body of work?  Don’t cherry-pick; look at all the evidence, not just the carefully selected evidence that supports a particular point of view.”

He reiterated this caution in his Symposium presentation, and shared several other approaches to demonstrating that human causes for global warming are real and increasing.  Senator Cruz and his group crafted a set of internally-consistent observations that challenged the IPCC’s (and international consensus), but Dr. Santer showed the fallacious assumptions on which those observations were based.

Dr. Santer’s comparison of what would happen if only natural forces were acting, as opposed to what human interaction with climate has caused

Dr. Santer has applied different tools to examining climate change, and they form a story that remains unchanged in his writings for several decades.  One of the consistent statements in his presentations is that, “We have identified human ‘fingerprints’ in many aspects of the climate system.   The climate system is telling us an internally-consistent story: Natural causes alone cannot explain the observed changes in climate”

In confronting climate deniers such as Senator Cruz, Dr. Santer maintains an ethical approach by conceding that adjustments are constantly made to the standard climate models.  This tends to leave scientists open to criticism from the more dogmatic opponents of pure science, who usually have an ideological standing to uphold.  Read his short course on climate science, referenced above, to determine whether Dr. Santer’s approach and arguments hold up well.

Something is certainly giving us warmer summers and even warmer winters.