As we head toward this year’s Electric Aircraft Symposium, we look back again at last year’s outstanding array of speakers and presentations.

Ken Goodrich, a senior research engineer for the Dynamic Systems and Controls Branch at NASA Langley Research Center, for the last several decades has been intent on creating improved human interfaces for airplane flight decks.  His presentation at EAS V last April was based on long-term research (and now available in the CAFE library) and took an approach that challenged the conventional notions of responsibility.

Integrating the airplane, pilot, and an enormously complex support mechanism

Surprisingly, student pilots, at least in National Transportation Safety Board (NTSB) figures for general aviation in 2005, had the lowest accident rate compared to private, commercial and airline transport pilots, with commercial pilots having the highest rates. This could be accounted for by the fact that students generally spend a great deal of their flight time in simple aircraft, performing basic maneuvers near or in an airport traffic pattern.  More advanced pilots tend to fly more advanced aircraft on more advanced “missions.”

Many private aircraft now emulate the flight decks on larger, commercial airplanes, and that is bringing new opportunities along with some pretty heady challenges to the private pilot.

Such “glass panel” laden cockpits provide the latest in navigational and situational awareness tools, but can trap unwary pilots who choose incorrect operational modes, or set up computers with incorrect inputs.  Flight management systems (FMS) and autopilots may be compatible with 4D and RNP flight, but pilots may not be as adept as the computers on board at sorting out the various outputs of the system.   RNP is Required Navigation Performance, a more precise version of RNAV, which in terminal operations can be honed to the tenth-mile accuracy, and which allows freedom from following fixed aerial routes.  4D is new enough that the first actual 4D flight took place February 12 between Toulouse, France and Stockholm, Sweden, nearly a year after Goodrich’s EAS presentation.  4D flight can be thought of as navigation through 3-dimensional space with the added need to make required maneuvers at designated times (the fourth dimension).

According to Silicon Republic, “The flight trajectory started off from Toulouse, with the test aircraft flying through the Eurocontrol Maastricht Upper Area Control Centre (MUAC) airspace where the airborne and ground systems agreed on a first time constraint at a merging point close to Copenhagen Airport. 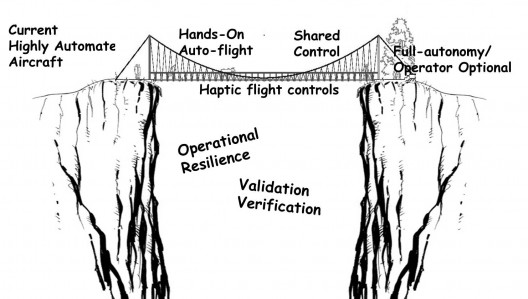 How and when will we bridge the gap?

This automated interaction between different elements of the air traffic control system will require a high standard of piloting and planning skills, and will make the automated cockpit a major player in achieving this kind of 4D precision.

This is where Ken Goodrich is doing pioneering work in determining how best to combine the pilot’s need to control the flight while not necessarily being in command of the actual flight operation.  A friend of the authors flew for Delta Airlines when “heavies” started getting the capability to do automated takeoffs and landings.  He was upset at management’s decision to require parts of flights to be flown under that early “robotic” control, having started in the right seat of a DC-3.  This is the kind of practical and philosophical conflict that will be part of our ongoing study of how best to integrate the human and the computer.

While Goodrich extolls the virtues of the high-tech flight deck of the future, he also acknowledges the issues these new flight environments raise.   The ability to mix or match modes of display and operation creates complexity for the pilot.  Data entry can be awkward and memory intensive (this author has watched a seasoned executive jet pilot input navigational information into the flight computer on a Citation and it is a minor trial).  The crew monitors things without physical involvement, which can lead to pilot “naps” and inattentiveness when it is most needed.  The airplane has no integrated “situation awareness” and no ability to respond to simple situation elements.

At this point, we can see the need to change training to cultivate better judgement, superior decision making, and enhanced perception for pilots.  Moving from “steam gauges” to glass cockpits and beyond may lead to a totally different way in which we integrate the pilot and his mount.