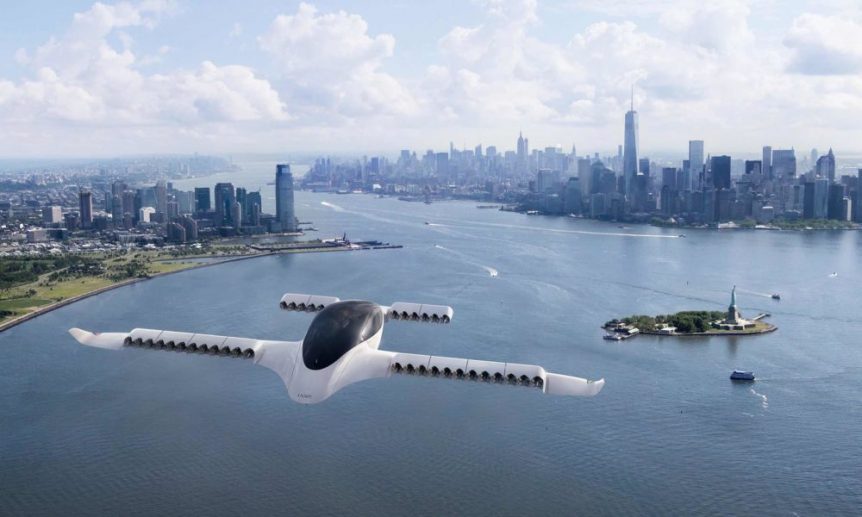 Uber Elevate, headed toward its third annual meeting in Washington, D. C., has established guidelines for what it wants to see flying in its service.  Lilium, a German electric Vertical Takeoff and Landing maker, has flown a vehicle that seems to meet those guidelines.

The web site, A New Domain.net, notes, “The authors of the Uber paper point out that the high-profile German concept, the Lilium, is a ‘push to extremely high levels of distribution while coupling the vertical lift in closely with the wing high-lift system.’ The concern here, however, is that such jet-lift approaches “will require substantially higher power for takeoff and landing, with greater challenges operating quietly within cities,” according to the Uber paper.”

“From the looks of it, Lilium still looks awfully cool. Due in 2018, Lilium is an egg-shaped plane and oft noted as a key development by European Space Agency (ESA) reps. Capable of a top speed of 250mph and a range of 300 miles, it is said to require just a 50×50 foot place to take off.”

Electric Flight.eu, a great resource for new entries into the electric flight realm, reports, “Lilium celebrated another maiden flight. This time, however, with a really 1: 1 pattern of the five-seat Lilium Jet in front of its own employees.  Still rather uncertain, like a flying stork, because of still seemingly unbalanced flight control, the construction took off at the airport Oberpfaffenhofen near Munich, where the enterprise is now also settled with approximately 300 coworkers. The one-and-a-half-tonne prototype, powered by 36 electric motors, started vertically, remained hovering and again landed vertically. The Chinese IT company Tencent and other investors had already given Lilium almost 90 million euros.”

Uber Black in the Black?

Lilium’s latest might provide Uber with the revenue carrying size it needs to be profitable, if operating costs can be held within tolerable limits.  Uber keeps promising that its aerial service will cost riders no more than its ground-bound Black service.

How Much Does Uber Typically Cost?

Uber explains, “You can expect to pay anywhere from $5 on up. Charges may increase if there’s a surge in rider demand since the rates are dynamic. While each ride is limited to a distance of 100 miles (160 km), always keep an eye on the upfront fare as it won’t always be the same. The average costs for each main car service are shown above.”  We can hope that the aerial fees will be less obfuscatory than this explanation.

Time or Money, or Both?

Looking at travel times on Google Maps, we can see the relative times going from San Francisco to San Jose consume.  Cars can zip along the 51 miles in about an hour on a relatively clear 101 highway.  During gridlock early in the morning or late in the day, that can go up to over two hours.  At its 168 mph cruising speed, a Lilium EV could turn that into a 20-minute trip.  It would be preferable to take the rate per minute under that scenario, if Uber would permit (doubtful).  That would make the quick ride about $35.  The per-mile rate would raise that to $178.85, a potentially tough sell for even the well-heeled.

One can take CalTran between the two cities for $9.95 one way, or $21.00 for a day pass.  Depending on day or weekend schedules, the trip between San Francisco and San Jose will take around one hour and 20 minutes.  So, time and money can be deciding factors, although a quick aerial jaunt would have enough excitement to cause some to make that choice.

Uber had an architectural competition for Skyports that would support the rapid dispatch and retrieval of Uber Elevate vehicles.  John Badalamenti, uber’s head of design for advanced programs and aviation, said “while uberair might feel like a far away dream, it’s closer than you think and urban infrastructure has to start to evolve now to keep up.”  Such visions need solid ground underneath, and sites need to be located and purchased at the earliest possible date, since land prices will only increase in the future.

Note the need for connections to freeways, highways, bus routes and rail connections.  Somehow, all those Elevate passengers have to have easy access to the Skyports to make the aerial trips worth the possible premium prices, and then achieve ground times that will support the short flight times.

As with electric aircraft and eVTOLs, the vehicles themselves, their motors, controllers, and control systems all seem well proven and reliable at this point.  Batteries still need work.  The biggest impediment to future success may be in the ground support systems required to maintain the goals achieved in flight.