We think of gel inserts as something to absorb energy in shoes, and their uses extend into saddle cushions and protective seat pads for racing drivers.  Researchers in South Korea, however, are looking at ways to transfer ions through gelatins similar to those used in Japanese food.

Konnyaku is a vegan gelatin often used to make stretchy noodles popular in Japanese cooking.  A similar organic gel (organogel) can be used in electrolytes with “high ionic conductivity and cationic transference number,” according to a research team at Ulsan National Institute of Science and Technology (UNIST), South Korea.

Professors Hyun-Kon Song and Noejung Park of UNIST and their fellow researchers have developed an organogel polymer electrolyte that looks like clear Jello® and which could solve problems presented by liquid electrolytes.  Their electrolyte gels irreversibly despite surrounding temperatures, and passes lithium ions easily.

Stability during thermal events might have prevented recent battery fires on the Boeing 787, according to Song and Park.  The release of flammable electrolytes expanded the damage started by failure in single cells in the Dreamliner battery pack. Safer electrolytes, the researchers believe, would have at least mitigated the damage.

Liquid electrolytes are used in supercapacitors, batteries and fuel cells because they have high ionic conductivity – they help electric current flow easily.  They leak occasionally and are sometimes explosive, though, leading researchers to look for ways to lessen those negatives. 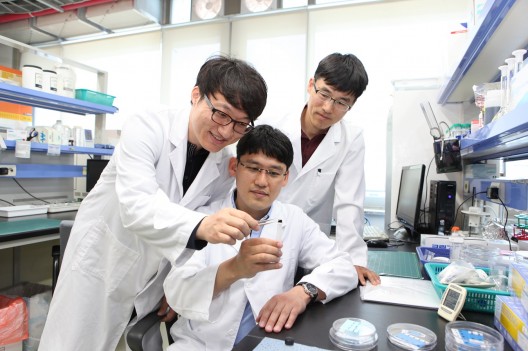 Until recently, solid electrolytes were not used because of their limited ability to transfer ions. Like a bad dancer, solid electrolytes are… solid, just standing there while the liquid electrolytes dance circles around them and carry the ions away with their fluid motion. Through careful selection of materials, Song and Park found a winning combination of ingredients that allowed the solid electrolyte to add its physical strength and stability to a battery while meeting the need to keep current flowing.  Where most solid electrolytes seem to encourage the flow of positive ions (cations), their relative inability to cause negative ions to transfer readily leads to “inferior cell performances.”

The team’s gel adds ease of manufacturing to high conductivity and the ability to make cations move.  According to the University, “The research team acquired the two required properties simultaneously in polymer gel electrolytes: a liquid-electrolyte-level conductivity with a high transference number. Cyanoethly polyvinyle alchohol (PVA-CN) played a key role in the highly conductive gel electrolyte while another cyano resin, Cyanoethlyle pullulan (Pullulan-CN), was used as a control representing a liquid electrolyte containing cyano chains. The PVA-CN-containing liquid electrolyte was thermally gelated even without any chemical crosslinkers or polymerizations initiators.”  Such gels might add impact resistance to their list of good characteristics, an added benefit in EV crashes.

Song, Park and co-researchers Young-Soo Kim, Yoon-Gyo Cho, and Dori Odkhuu published their results in the May 29, 2013 Nature.com Scientific Reports.