“Today we’ve shown that electric aircraft have moved beyond science fiction and are now in the realm of practice.” – Chief technologist at NASA Joe Parrish.

The lead quote is informative, as are some figures from the release.  “The competition resulted in the world’s most efficient aircraft, beating the state of the art of approximately 100 pmpg (passenger miles per gallon) which is achieved by the newly released Boeing 787 airliner.  Essentially this contest showed the ability of small aircraft to achieve twice the efficiency of the most efficient production automobiles today, while traveling at over twice the speed.” 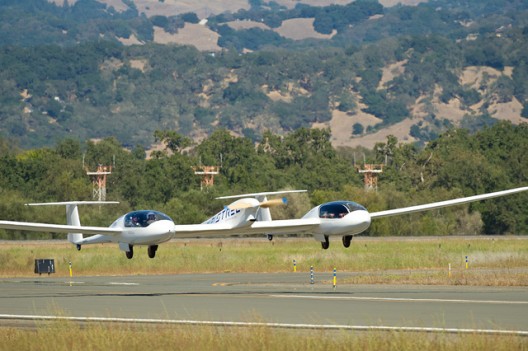 Part of this efficiency came about because of inspired design.  NASA explains, “The Taurus G4 used a multi-body concept (reminiscent of the twin Mustang, or an inverse P-38); this accomplished a 61% useful load fraction (or empty weight fraction of 39%).  This spanloading structural benefit is similar to that accomplished by the NASA Hybrid Wing Body concept. The Taurus G4 also achieved a motor/controller efficiency of 96%, and utilized the largest battery pack ever assembled for auto or aviation use of 100 kWhr (kilowatt hours), which included a 30 minute reserve capacity.”

Although the two more conventionally powered competitors were highly efficient designs, “neither of these aircraft met the minimum threshold of 200 pax mpg to be awarded prize funds.”

Despite the limitations imposed by current battery technology, the winning electric aircraft show what can be achieved – and it is formidable.  A big thank you to NASA, Google, and the CAFE Foundation volunteers for making this event possible.