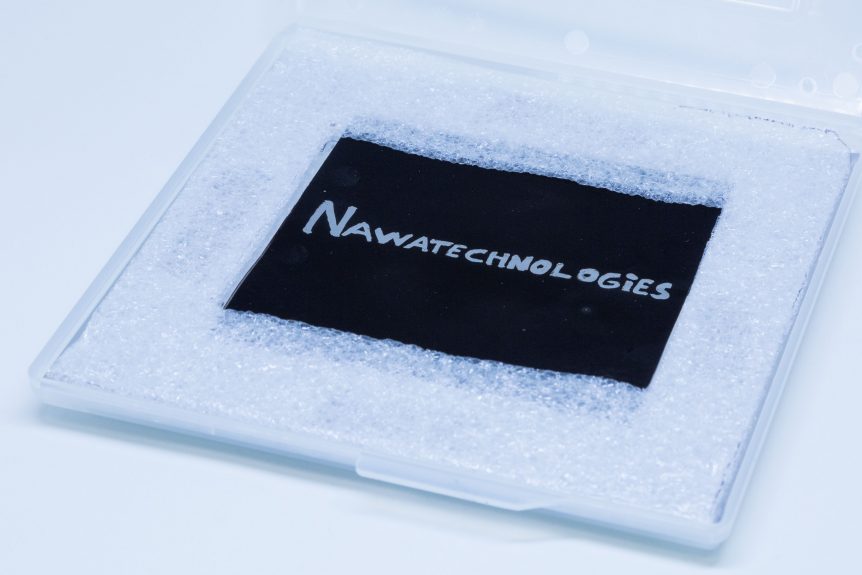 Most battery breakthroughs are five years in the future, following the basic rules of scientific journals and Popular Science magazine.  The usual refrains are, “Further research is required,” and “Researchers expect commercial development within the next decade.”  Rather than wait for the future, NAWA Technologies claims the world’s fastest electrode today and production now. 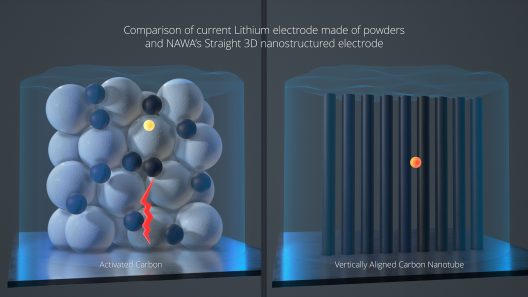 NAWA’a brochure explains their Vertically Aligned Carbon NanoTube (VACNT) architecture is “key to its next-generation energy storage.”   Think of a forest of carbon nanotubes through which current can flow.  In the jumble of usual battery materials, an ion would have to clamber over boulder-like obstructions and possibly get hung up in the random intersections of conductive material.  The VACNT architecture allows ionic flow as though they are cruising down a well-maintained interstate freeway.

Constructed from carbon and graphene, VACNTs hold the promise of a “quantum leap” in battery performance.  NAWATechnologies foresees “revolutionary improvements in power, energy, lifecycle and charging time.”  Their Ultra Fast Carbon Electrode contributes to better performance and “significant cost savings.”  NAWA points out that, “Electrodes account for almost 25 per cent of the cost of a battery while today’s global lithium-ion battery market is worth in excess of $35 billion.” (Avicenne report 2019)

Demonstrating an application for their ultracapacitor and battery development NAWA developed a Racer Motorcycle which splits power and energy demands between a tenth of a kilowatt-hour ultracapacitor pack and a nine kilowatt-hour lithium battery pack. This combination powers 100 metric horsepower (98.632 mechanical horsepower) motor that propels the 150 kilogram (330 pound) cycle.

Because the capacitors represent one-ninetieth of the total energy available, they make up for that by discharging quickly to give sudden power boosts and pull in energy from braking to regenerate their charge.  Their ability to charge and discharge quickly takes that burden off the battery pack, which can store energy for long-term cruising but is not as good at producing high-power bursts.  Such bursts, also called high C rates of discharge, heat things up and shorten battery life. They also lead to thermal runaways and resulting battery fires.  The ultracap/battery combination can alleviate those issues.

NAWA’s brochure provides another short-term possibility, combining their Ultra Fast Carbon Batteries with hydrogen fuel cells.  “When combined with existing lithium-ion batteries – which boast greater energy density – or hydrogen fuel cells – that are not capable of harvesting energy at all – they can provide more power and extend a product’s lifetime. In the long term, the possibilities offered by NAWATechnologies’ Ultra Fast Carbon Battery could enable the company to develop hybrid ultracapacitor cells. With energy densities approaching those of lead acid batteries but with much faster charging times, these cells would lower overall battery pack weight and extend service life, ideal for use in automotive, wider mobility and renewable energy sectors.”  Note that the ultracapacitors have energy per weight performance only approximating that of lead-acid batteries – disappointing but offset by other advantages. 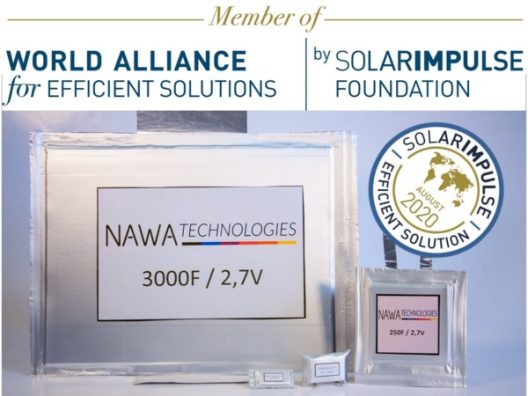 NAWA products have gained recognition by the Solar Impulse Foundation, hinting at use in aircraft, perhaps

NAWA sees a rosier future for their UFCB.  “In the long term, the possibilities offered by NAWATechnologies’ Ultra Fast Carbon Battery could enable the company to develop hybrid ultracapacitor cells. With energy densities approaching those of lead acid batteries but with much faster charging times, these cells would lower overall battery pack weight and extend service life, ideal for use in automotive, wider mobility and renewable energy sectors.”

As noted in their video, NAWA sees potential structural battery applications in transportation – including aircraft.  This again may be a way to lessen the less than stellar energy density.  It will be fascinating to see where this relatively young company goes.