While at Sun n’ Fun in Lakeland, Florida, we couldn’t help but notice Jim Lee’s Phoenix Air Phoenix, an S-LSA (Special Light Sport Aircraft) motorglider from the Czech Republic, posed as it was on the line of march into the air show area proper.

Your editor was interested in the PhoEnix, the electric version of the proper looking and highly attractive Rotax-powered version in the Light Sport Aircraft display display, next to its Pipistrel neighbors.  There were a great many middle European LSAs being shown, but the Phoenix had ended up on the Airshow’s promotional poster, neatly avoiding the FA-18s of the Blue Angels. 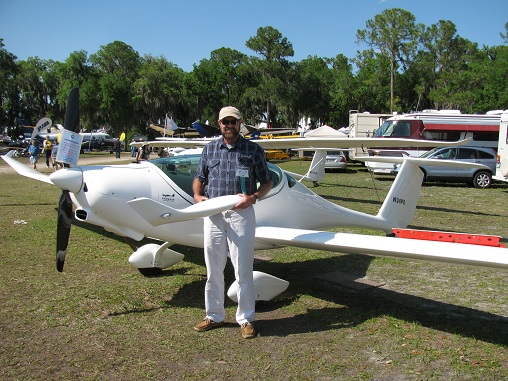 The electric version will be competing in the Green Flight Challenge, so revelations from Jim Lee, the airplane’s U. S. distributor and pilot in the GFC, were the usual furtive responses to detailed questions.  All competitors are being careful to avoid revealing too much until after Larry Ford’s presentation at the fifth annual Electric Aircraft Symposium in Santa Rosa, California on April 29-30, and most don’t want to give away any secrets until the day of first flights at the GFC in July.

The electric competitor, which is also contending in the Berblinger prize at the Aero 2011 in Friedrichshafen, Germany today, will be more smoothly cowled, since the four opposing cylinders are replaced by a coffee-can-sized motor that allows a smooth transition between the propeller and the rest of the fuselage.  Additional aerodynamic enhancements increase the lift:drag ratio from the Rotax version’s 32:1 to 36:1.

The airplane comes with short and long wingtips to allow flight as a 49-foot span motorglider or as a 36-foot span straight LSA, and removal of either tip allows the craft to fit in a standard T-hangar without further disassembly.

The GFC model will be powered by a 44 kW motor and controller developed in house by Phoenix Air, the Czech designer and builder, and use commercially-available lithium polymer batteries.

Jim’s web site provides full specifications, which put the Phoenix solidly in the LSA camp, and includes a high-definition video that shows his flying skills to advantage – something that will be valuable in Santa Rosa in July.   Jim maintains his own blog, which incorporates many of his adventures in the motorglider.

Jim Lee has at least two happy memories to take home from Sun n’ Fun: a sale (part of which he attributes to the “wife friendly” cockpit and inviting seats) and the award for the Outstanding Fixed Wing Light Sport Aircraft at Sun n’ Fun 2011.