One of the most anticipated presentations at this year’s Electric Aircraft Symposium in Santa Rosa, California, April 29th and 30th, was that of the CAFE Foundation’s Vice-President, Larry Ford.  He had the enviable task of unveiling the contenders in the Green Flight Challenge – a mix of conventional aircraft powered by unconventional means, unconventional craft being sent aloft by a variety of the mundane and the exotic, and wildly unconventional concatenations of technologies. 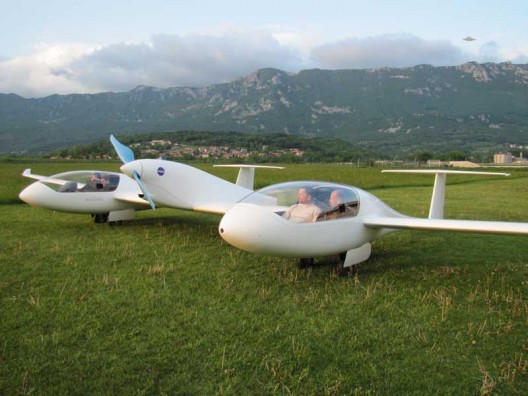 A slightly weird view out the motor-side plexiglas

Pipistrel’s G4 turned out to be simple math: G2 plus G2 equals G4.  The configuration could hardly be preconceived, though.  According to Pipistrel USA’s Michael Coates, “This unique design has come about by grafting two Pipistrel Taurus aircraft together with a center section which is some 5 meters (16 feet) wide and includes a center pylon housing the electric engine and batteries designed to successfully carry this aircraft to the skies and hopefully to the completion of the 2011 CAFE/NASA challenge, the design bears some similarity to the twin Mustang fighter and even White Knight Two.

“The aircraft is powered by a 145 kilowatt (194 horsepower) brushless electric motor which is centrally positioned between both fuselages and drives a large 2 meter (6.4 feet) custom two-blade propeller. The total wingspan is 21.4 meters (75 feet) making the aircraft wingspan not much smaller than a DC3(!) as a comparison. The undercarriage is retractable and the aircraft has extremely good gliding capabilities although it is not designed as a glider but as a very efficient aeroplane (Michael’s Australian, you know) utilizing electric propulsion. 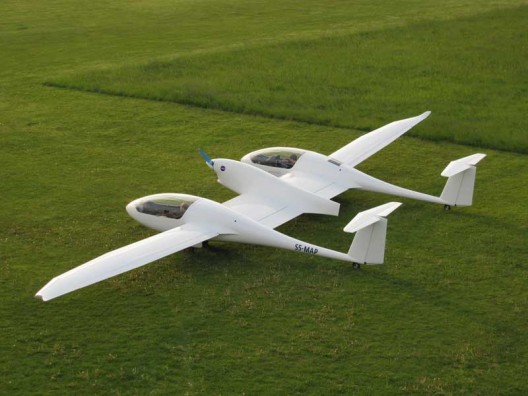 "Aircraft, say type again, please? You're way too big to be going that slow."

“The goal for the development of this aircraft is to enter and hopefully be successful in completing the 2011 CAFE/NASA green flight challenge which is held between July 11 and July 17, 2011 at the Santa Rosa airport in northern California and then also competing in the EAA AirVenture Electric Flight Challenge held at this year’s Oshkosh event just a few weeks later.”

Tine Tomazic, one of the primary development engineers on the project, is reticent about performance figures for the GR, but has mentioned that the G4 is, “The most powerful electric aircraft currently developed, it has the most battery capacity on-board and it is also the first four-place aircraft to be flown under electric power.”

“Tine disclosed that the CAFE Racer is purely a proof of concept aircraft which Pipistrel is using as a test bed for many of the same technologies which will be introduced into the recently announced Panthera aircraft,… available with a normal gasoline engine, hybrid engine and… fully electric engine. After the completion of these competitions it is expected the aircraft will be sold to somebody wanting a very unique and one-of design for personal use or to a company wanting to further investigate future propulsion technologies on an already proven airframe with the ability to quickly replace or substitute the propulsion system.”

It would be a great flight trainer, too, capable of teaching three aspiring pilots at once.  The control system, which Tine helped design, must be a bit fascinating in that respect.

“The Pipistrel Taurus G4 will arrive in the USA in the first week of June for registration, certification and ongoing testing before the start of the CAFE Challenge in July.”