A great deal of the light that falls on solar cell panels does little to generate electricity, with a high percentage bouncing off pointlessly.  Princeton researchers have confronted this issue with a layered assembly, otherwise known as a subwavelength  plasmonic cavity.

Developed by Princeton University researcher Stephen Chou and a team of scientists, the cavity dampens reflections and traps light.  According to Princeton’s announcement, “The new technique allowed Chou’s team to create a solar cell that only reflects about 4 percent of light and absorbs as much as 96 percent. It demonstrates 52 percent higher efficiency in converting [direct] light to electrical energy than a conventional solar cell.”

Overall, the team was able to increase solar cell efficiency a total of 175 percent with their nanostructured sandwich by capturing not only direct sunlight, but angled rays and diffuse light that occurs on cloudy days.  MIT researchers recently reported attempts to gather varying wavelengths of light to effect the same type of increase in efficiency. 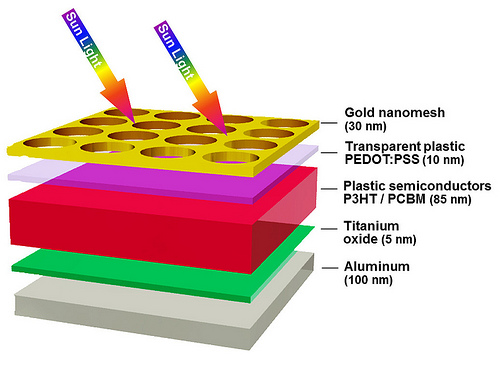 Chou’s solar cells resemble a sandwich, with a top layer of an ultra-fine metal mesh, 30 nanometers thick, with each hole 175 nanometers in diameter and 25 nanometers apart.  The Princeton announcement explains that, “A nanometer is a billionth of a meter and about one hundred-thousandth the width of human hair.”  Usually, solar cells have a top, or window layer of materials such as indium-tin-oxide (ITO).

Subsequent layers are more conventional, the second composed of a thin strip of semi-conducting material, and the bottom layer a metal film typically used in solar panels. “It can be any type — silicon, plastic or gallium arsenide — although Chou’s team used an 85-nanometer-thick plastic.”

Mesh spacing, sandwich thickness, and the size of the nano-holes are all smaller than the wavelength of the light being collected – the subwavelength part of the cell’s description. Chou, the Joseph C. Elgin Professor of Engineering, describes  these unbelievably small spaces as miniature black holes, trapping the light and apparently pulling all the energy possible from it. 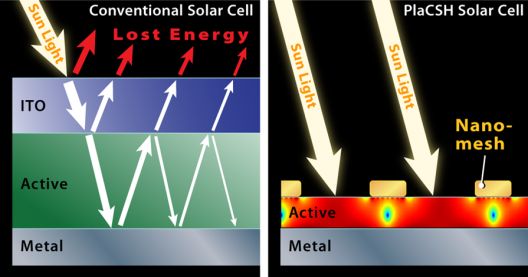 This manifests itself in the black surface of the cells. “The team calls the system a “plasmonic cavity with subwavelength hole array” or PlaCSH. Photos  of the surface of the PlaCSH solar cells demonstrate this light-absorbing effect: under sunlight, a standard solar power cell looks tinted in color due to light reflecting from its surface, but the PlaCSH looks deep black because of the extremely low light reflection.”

Perhaps best of all, Chou says that PlaCSH solar cells can be manufactured in cost-effective wallpaper-size sheets, using “nanoimprint,” an imprinting technique Chou invented 16 years ago.  Such sheets could be printed on plastic and give a new high-efficiency mark to so-called “organic” solar cells.  Since the PlaCSH does not use the ITO electrode, it dispenses with the most expensive part of most solar cells, and one of the most brittle elements of traditional cell design.  Chou’s cells can bend easily, making them good candidates for use on wings or other vehicle components.

Chou’s lab has also used plasmonic nanodots to improve immunoassays and medical diagnoses, and to boost sensitivity of nano-antennas for detection of chemical and biological agents.

Chou and electrical engineering graduate student Wei Ding reported their findings in the journal Optics Express.  Their work was supported in part by the Defense Advanced Research Projects Agency, the Office of Naval Research and the National Science Foundation.