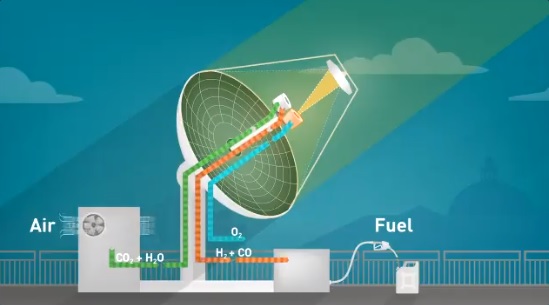 ETH Zurich (the Swiss Federal Institute of Technology), is recycling and reusing CO2 to make jet fuel as part of a carbon-neutral process.  This is not a new idea, with others’ approaches to this detailed in earlier blog entries here, here, and here. 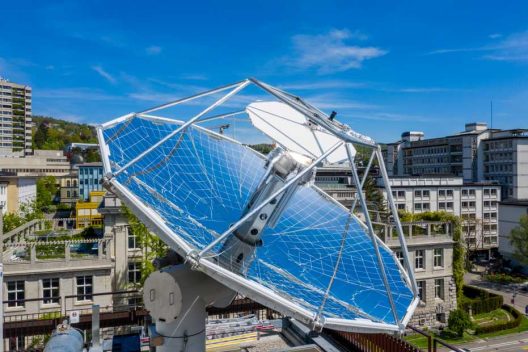 The research plant is located on the roof of the ETH building on Sonneggstrasse. © ETH Zurich / Alessandro Della Bella

Centered on a solar collector/reactor on the roof of ETH’s Machine Laboratory building in Zurich, researchers have “developed a novel technology that produces liquid hydrocarbon fuels exclusively from sunlight and air and have demonstrated the entire thermochemical process chain under real field conditions.”

Extracting CO2 and water directly from ambient air through an adsorption/desorpton process, the system feeds these free materials into a solar reactor that is at the focus of the parabolic reflector that heats them to 1,500° Celsius.

A cerium oxide structure in the reactor enables a redox (oxidation-reduction reaction)* cycle, with syngas an end product.  This gas can be processed into a commercially-viable hydrocarbon fuel through conventional methanol or Fischer-Tropsch synthesis, according to GreenCarCongress.

The research has led to alliances with a relatively new company, Synhelion, and with an existing firm, Climeworks. 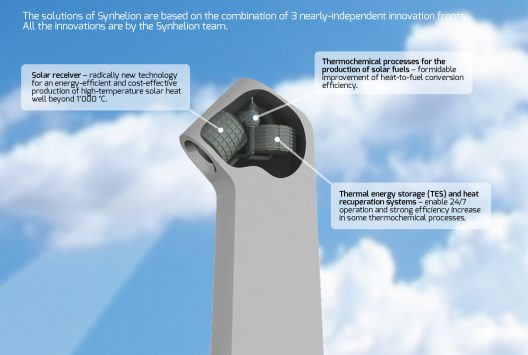 Synhelion works with ETH with the proof-of-concept reactor in Zurich and a large-scale solar-tower project near Madrid, Spain as part of the European Union Sun-to-Liquid program.  The team has even bigger plans in mind.  Philipp Furler, Director (CTO) of Synhelion and a former doctoral student in Steinfeld’s group, says, “A solar plant spanning an area of one square kilometer could produce 20,000 liters of kerosene a day.  Theoretically, a plant the size of Switzerland – or a third of the Californian Mojave Desert – could cover the kerosene needs of the entire aviation industry. Our goal for the future is to efficiently produce sustainable fuels with our technology and thereby mitigate global CO2 emissions.”

Climeworks removes CO2 from the air with a simple filter system and heats the captured carbon dioxide and compresses it for customers who, “Utilize this atmospheric CO2 in carbonated drinks, in agriculture or for producing carbon-neutral hydrocarbon fuels and materials.”

In the oxidation process, an atom loses its electrons and obtains a charge that corresponds to the adjustment of the oxidation number. The atom or substance that facilitates the oxidation reaction is known as the oxidizing agent.