Several researchers in commercial, government, and academic realms are studying the possibility of using aluminum as an energy source for vehicles and even grid power.

In the commercial realm, Alchemy Research in Israel makes the following rather startling claims.  “Alydro is a new technology developed by Alchemy Research for producing clean energy from a reaction of aluminum and water at elevated temperatures.

“Alydro generates energy in the form of hydrogen and heat. The only by-product is fully recyclable aluminum oxide. 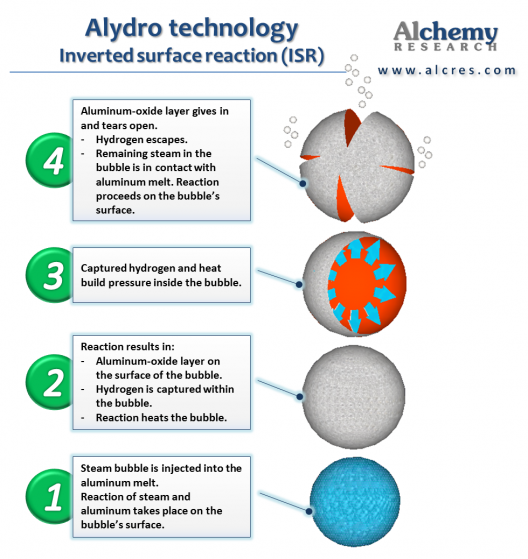 “Alydro is competitive with gasoline on energy density and affordability. It is superior to gasoline on sustainability, environmental characteristics and safety.”

Alchemy Research claims that aluminum has 2.5 times the energy density of gasoline, about 84 mega Joules per liter or 23.3 kilowatt hours. Aluminum has about 8.6 kilowatt hours per kilogram, considerably more energy dense than lithium batteries, which range from 120 to 190 Watt-hours per kilogram. Storage takes less space than its equivalent in gasoline and the material is perfectly safe and non-reactive in its normal state.

Electric cars, with few exceptions, seem to have 100 to 150 mile ranges, Alydro claims a car with a 60-liter tank of aluminum could travel over 2,400 kilometers (1,490 miles) on a single fill-up of its aluminum fuel.

2,400 kilometers per fill-up - on aluminum and water

According to Alydro, the reaction that takes place uses water to oxidize aluminum into aluminum-oxide thus releasing hydrogen from the water. 1 kilogram (2.2 pounds) of aluminum reacts with 1 kg of water to generate 112 grams of hydrogen.  49.4 percent of the energy produced is released as heat, the other 50.6 percent is released in the form of hydrogen.

“Fill-ups” would take about five minutes, with the odd detail requiring removal of the spent aluminum oxide, topping up the water lost in the process, and refilling the aluminum containment tank.

Alchemy Research has released a white paper on their hybrid vehicle propulsion technology and their grid storage technology.

The Christian Science Monitor reported on the technology, and assessed the feasibility of a car running on this energy source.  Many of the critiques would apply to aircraft use as well.

The Monitor asks, “The perfect fuel then? Not quite. Although there are plenty of benefits, the white paper does point out a few key negatives–and not insignificant ones by their estimate.

“A vehicle that not only contains batteries and all the associated bits and pieces but also a water tank, aluminum tank, turbine/generator and an Alydro reactor would surely weigh significantly more than either.”  (Certainly of concern for aircraft use.)

The Monitor expresses concern regarding costs, which Alydro admits are not yet competitive with gasoline, but predicts parity as carbon fuel prices rise.

This blog reported last year on a Catalonian professor and grad student running a model car on pull tabs, water and vinegar, a miniature demonstration of the process’ capabilities.

And in a demonstration on YouTube, Dr. Christopher Bunker at the Air Force Research Lab in Dayton, Ohio and fellow scientists have combined aluminum nanoparticles with water to generate over a thousand liters of hydrogen from a single liter of water.  Researchers see possible use in rockets or aircraft, although probably not with the heavy complexity of the Alydra hybrid machinery.

The note accompanying the video quotes Dr. Bunker: “You have your palette of paints, the chemicals, and what you can do and where you can go is only limited by your own imagination.”

The research team’s paper,“Templated Synthesis of Aluminum Nanoparticles – A New Route to Stable Energetic Materials” was published in the October 19, 2009 Journal of Physical Chemistry Letters and a second paper, “Spontaneous Hydrogen Generation from Organic-Capped Al Nanoparticles and Water,” with another team was released in the January 7, 2010 ACS journal, Applied Materials & Interfaces.