Fraunhofer Institute for Manufacturing Engineering and Automation IPA in Stuttgart is part of a consortium dedicated to simplifying and integrating components to enhance electric car efficiency.  3Ccar, a European collaborative project, gets its funding from the ECSEL, the Electronic Components and Systems for European Leadership Joint Undertaking.

3Ccar’s goal is to develop “Integrated Components for ComplexityControl in affordable electrified cars,” giving them a noble purpose and convoluted abbreviation.

Fraunhofer’s mission in the consortium, to provide smart battery cells, looks to be well in hand with the recent announcement of battery cells that contain a “built-in microcontroller that records relevant physical parameters, such as the temperature and the state of charge of the cell—i.e., each cell knows its own condition. The cells communicate via the existing power wiring between battery cells; they can also communicate with other devices, such as the on-board controller, which uses the data from the cells to calculate the state of charge.”

According to the Institute, having a controller in each cell brings many benefits.  A dead cell, for instance, does not shut down the car, as it might in systems managed by a centralized battery management system.  Instead, it decouples from the battery pack or cluster, “acting like a current bypass. The others continue to deliver energy.” 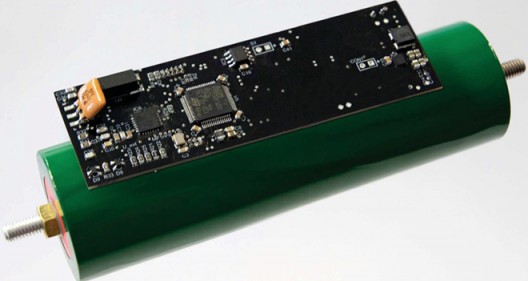 Fraunhofer smart battery with controller that will be embedded.  Next goal is to miniaturize control unit, drop price to less than one euro (about $1.10)

Dr. Kai Pfeiffer, Group Manager at Fraunhofer IPA says, “Depending on the cell quality, we can therefore increase the range by at least four percent. Over time, this effect is amplified: in the case of an old battery, and if the empty cells are replaced, it is conceivable that a range up to ten percent higher can be achieved.” (Editor’s Note: We assume with no change in battery chemistry.)

Smart cells would benefit manufacturers, who otherwise must sort battery cells and match their characteristics to assemble packs.  They also benefit owners, who will not be forced to replace the battery pack because on cell goes bad.  (In fairness, repairs are possible on existing battery packs for EVs and hybrids, but possibly not as tidy as claimed for this system.)

Any one cell removing itself from the system will not appreciably affect the performance of the EV – particularly important in aircraft – and can be replaced once the airplane is back on the ground following an uneventful landing.

The current cell controller is fairly large at this point in its development, and researchers are working on miniaturizing it and embedding it in cells.  Pfeiffer says, “We want it to cost less than a euro.”   Part of the development process is being conducted in the EU project “3Ccar,” addressing “vehicle control architecture and its subsystems in order to achieve the next level of efficiency.”

The total project consists of 10 supply chains—one of which is smart battery cells, led by Fraunhofer—developing the major project breakthroughs, structured in 8 work packages generating more than 100 deliverables with around a €54-million ($59.4 million) research and innovation budget distributed over 3 years.

The 10 supply chains will deliver hardware and software as listed here: