AirVenture’s unofficial prize for the most popular aircraft at each year’s fly in – the brown grass award, named for the trampled turf around the much-thronged craft, had a CAFE Foundation equivalent at this year’s Electric Aircraft Symposium.  That would be the crumpled carpet prize for the circles around Dr. Joseph (Joe) Armstrong, Chief Technical Officer for Ascent Solar, a Thornton, Colorado-based firm.  Wearing a bandolier-like ribbon of extremely thin, flexible solar cells at the end of his talk, he was surrounded by break-takers eager to get a closer look at his impressive array of photovoltaics. 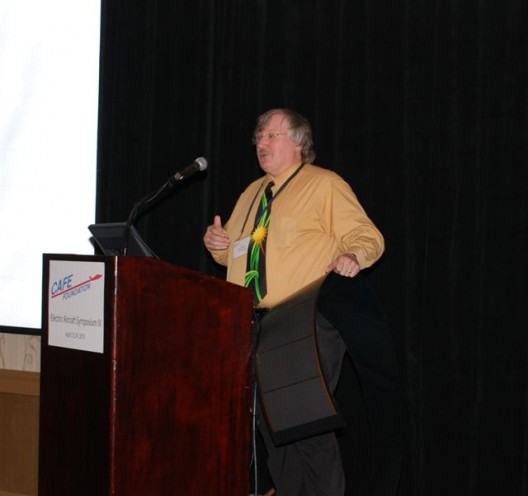 Commercial production modules of the copper indium gallium (di)selenide (CIGS) cells have been verified at an industry-high10.5-percent efficiency by the National Renewable Energy Laboratory (NREL).  The cells are created using thin-film deposition on a plastic substrate; this monolithic integration of the cells and their flexible backing permitting their draping over curved shapes.  An integrated manufacturing process using “laser pattern interconnect printing” forms PV modules, 20 volt units consisting of 44 cells, all on a flexible, insulating plastic backing.  The roll-to-roll manufacturing process provides efficient cells at a reasonable price – about $6.00 per Watt for the bare cells, according to Armstrong.

The bare cells are paper thin, with a 4-5 Watt, 20 Volt cell weighing 3.96 grams.  One kilogram of such cells can generate 1,026 to 1,282 Watts.  Flatter than their discrete cell competition, they are capable of being integrated onto structures such as wings, making them a desirable component in electric aircraft.  With outputs now possible, these would make ideal range extenders, and with projected higher efficiencies, become more a primary energy source.  Just parking one’s airplane would allow free recharging of batteries, reducing the need for supportive infrastructure.

The company has demonstrated the flexibility and durability of its CIGS cells in Building Integrated Photovoltaics (BIPV) and Electronic Integrated Photovoltaics (EIPV) module applications, ranging from five-meter long roofing modules that can be laminated onto structural materials, to flexible modules that have been sewn into military tents, providing electricity in remote areas.

Modules have withstood the tough “shake and bake” and harsh climate exposure standards of MIL-STD-810G testing, a testament to their durability.  Their efficiency and toughness helped George Bye of Bye Aerospace, also a presenter at the Symposium select Ascent cells for the Silent Sentinel, a hybrid unmanned aerial vehicle (UAV) project last year, and for future development of Bye’s electric Cessna 172 project.

With a second manufacturing line started, increasing efficiencies and lower costs projected for the future, Ascent Solar products may be seen on a good many aircraft that are now just plausible dreams.