With Bertrand Piccard at the controls, Solar Impulse completed its motor runups a few minutes before its scheduled 6:00 a. m. PDT takeoff.  The project commentator in Switzerland noted that Piccard looked “a little pensive” in the minutes leading up to the historic departure from Moffett Field in Mountain View, California. 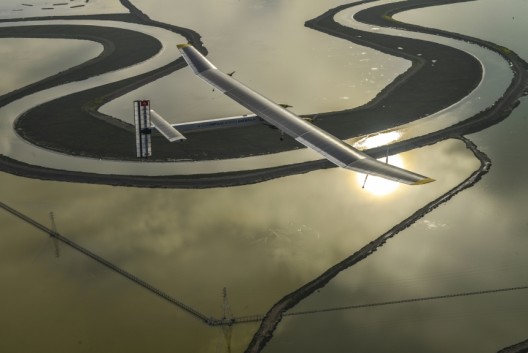 The first leg of the trip involves a stepped climb – first to 5,000 feet for about two hours, then to a little over 20,000 feet until about 7:00 p. m. , when the craft will begin a stepped descent for the next several hours and arrive over Phoenix near midnight.

As cars whizzed by on the nearby Highway 101 linking San Jose and San Francisco, Solar Impulse’s crew in Payerne, Switzerland called the tower at Moffet to coordinate final departure instructions.  After receiving the go-ahead from Payerne, Piccard guided the airplane from the runway at about 6:12 and made an effortless climb into the dawn’s glow over the South Bay.  Readers can follow on the project’s web site, with live helicopter shots, a virtual cockpit with heading, speed,  altitude, battery and motor readouts; and a moving map display to pinpoint the craft’s position.

We wish Piccard and co-founder Andre Borschberg good fortune and clear skies on their way east.