It’s hard to believe that the Solar Impulse has been on its Cross America tour since May 3, but its early touchdown at New York City’s John F. Kennedy International Airport late Saturday night was cause for elation on at least two counts.

First, as the Solar Impulse team points out, “For the first time a plane capable of flying day and night powered exclusively by solar energy has crossed the USA from the West to the East Coasts without using a single drop of fuel.”  As we love to point out, though, it’s not the first time a solar-powered airplane has made the trip.  Eric Raymond did it in 21 hops in 1990 in Sunseeker 1, using the technology available at the time – which did not allow overnight flights.  Both trips are literally epic voyages, nonetheless.

Second, for several anxious hours the flight, the airplane and even the fate of pilot Andre’ Borschberg, Solar Impulse’s co-founder and CEO, were threatened by an eight-foot-wide piece of torn fabric on the lower part of the left wing that luffed in the airstream, still attached to the rear spar, but exposing the structure and causing noticeable imbalance in the controls. 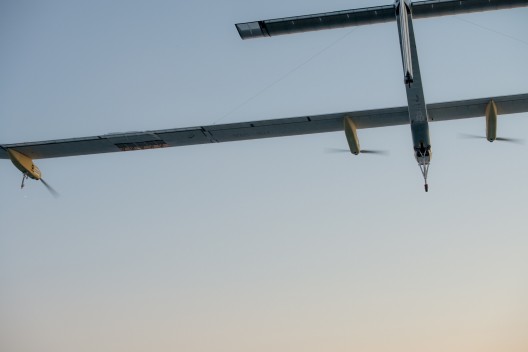 Over the Atlantic off the Atlantic City, New Jersey area, an eight-foot rip exposes the structure of the left wing. Photo: Solar Impulse | J. Revillard

“This last leg was especially difficult due to the damage of the fabric on the left wing. It obliged the team to envisage all the possible scenarios, including bailing out over the Atlantic. But this type of problem is inherent to every experimental endeavor. In the end, this didn’t prevent us from succeeding in our Across America mission and provided an invaluable learning experience in preparation for the round-the-world tour in 2015,” said André Borschberg shortly after landing, adding “we extend our gratitude to all airport and government authorities whose precious support made this mission possible.” 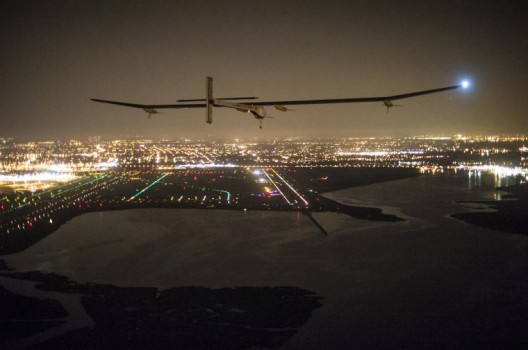 The 18-hour, 23-minute flight was about three hours shorter than planned, causing air traffic controllers to revise patterns and reschedule activities.  The early landing cost photographers several “photo-ops” of the big airplane flying slowly over landmarks such as the Statue of Liberty and the World Trade Tower that replaces the World Trade Centers. 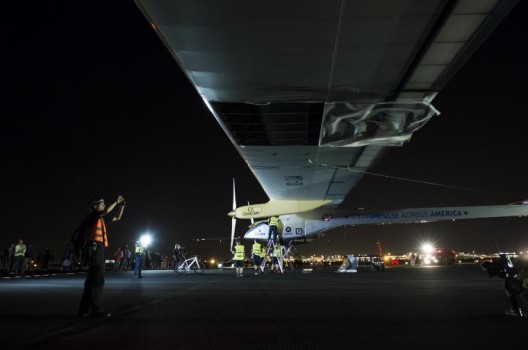 Andre’s and Solar One’s safe arrival more than compensate, however, and a news conference and “Flying Laboratory” event on Monday, July 8 at JFK will highlight the mission’s accomplishments and the contributions of Solar Impulse partners Solvay, Schindler, Swiss Re Corporate Solutions, Bayer Material Science, Sunpower and the Swiss Government.

Bertrand Piccard and Andre’ Borschberg will ring the NASDAQ opening bell and follow that with TV interviews through the morning.  In the afternoon, they will speak at the “Economic and Social Council (ECOSOC) Chamber in presence of UN Secretary General Ban Ki-Moon and Ambassador of Switzerland to the United Nations Paul Seger.”

Solar Impulse will be on display from July 8th through 15th at JFK in a series of private and public showings.  One the 16th, it will be packed onto the specially-configured 747 that brought it to Moffett Field in April and fly back to Switzerland.

The flight has elicited fascination from many who have followed its progress and found inspiration in the clean technology involved.

According to the BBC, “At a welcoming event when the craft reached Washington DC, US Secretary of Energy Ernest Moniz said: “If you look at the Department of Energy’s research programs and technology visions, it involves many of the same kind of technology advances that these gentlemen have put together in an integrated system to accomplish something that would not have been thought of a few years ago.

’I believe in 10 years we’re going to see the fruits of all these technologies changing the world.’”

“The project coincides with Piccard’s and Borschberg’s Clean Generation Initiative, an effort to encourage policy-makers and businesses to develop and adopt sustainable energy technologies.”

Thank you to Kristina Hodgson for the link to the BBC news service.