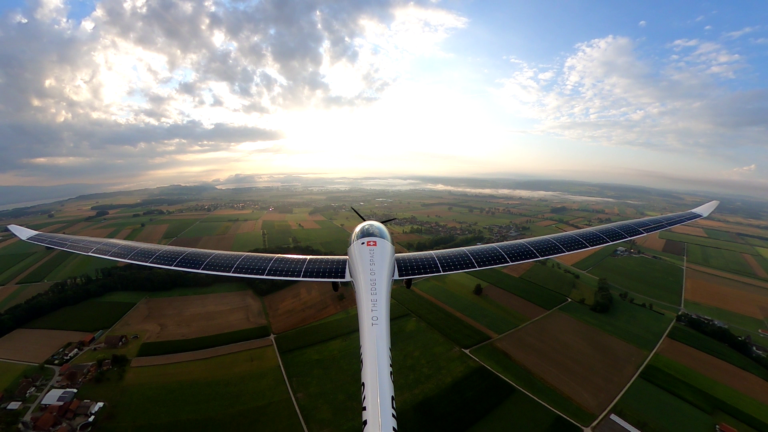 SolarStratos, a mission envisioned by Raphaël  Domjan and an airplane designed by Calin Gologan,  returns to the skies after suffering a literal break in its program in 2018.

During a series of tests that put increasingly heavy loads on the wings, its left wing broke with what was called a “technical damage.”  This type of breakage during stress testing is not uncommon, especially on what are special machines such as SolarStratos and Solar Impulse.  Solar Impulse 2 suffered a similar break when its newly-designed wing was being tested.  As noted, this type of setback takes the team back to the drawing board, but also besets them with new reflections on their ongoing decisions.  If it were easy, everyone would be doing it.

“This pioneering spirit involves a real technological challenge, and takes us to unknown territories. Risks are an integral part of such a project, even if our objective is to anticipate them as well as possible; this is why we carry out many tests.”

Building a 24.9-meter (81.69-feet) wing for a powered aircraft that will gross only 450 kilograms (992 pounds) is a great challenge, but one that designer Calin Gologan has faced with his range of solar-powered vehicles.

As noted here five years ago, The airplane will carry two “big” pilots in tandem and 30 kilowatt-hours of batteries.  With the entire craft weighing only 200 kilograms (440 pounds) empty and 450 kilograms (990 pounds) loaded, the HPD-25D dual motor (32 kilowatts/43 horsepower) will be able to loft the efficient airframe to its goal altitude in about an hour, according to Calin.   The motor contributes a mere nine kilograms (19.8 pounds) to the airplane and Calin notes that the dual motor controllers are each the size of a deck of cards, enhancing the craft’s light weight.

The aircraft foregoes pressurization, helping make it a great deal lighter than the Perlan 2 sailplane, which weighs in at around 1,800 pounds.  SolarStratos will have to hoist two pilots with pressure suits, though, about 44 percent of the airplane’s gross weight.

A Visit to Patagonia

Following the August, 2018 break in their wing, and waiting for the new design, Raphaël Domjan, Frank Bormann and Raphael Javet visited the Perlan Mission 2 team quartered at Al Calafate International Airport in Patagonia.  The two groups, both headed toward stratospheric goals, were able to discuss the challenges involved, “and Raphaël was able to gain the detailed insights of a highly motivated and dynamic team.”

Perlan acted as an inspiration for SolarStratos, with the power team reporting, “While the SolarStratos team was in Argentina, Perlan II broke a new record under tow, climbing to more than 40,000ft (12,192 m), beating the 30,000 ft (9,144 m) former record. An historic moment!

“Since the 27 August, the glider has broken the record again, posting an all-time altitude record for a glider of 76,000 ft (over 23,000 m) – a monumental achievement for this extraordinary aeronautical project.”

Miguel A. Iturmendi, “Holds degrees in Aeronautical Science, Space Studies and Flight Test Engineering, and graduated as a Test Pilot from the National Test Pilot School.”  He was part of the Perlan team in Argentina, and flew with Jim Payne to 65,000 feet in 2018 in the Perlan 2.  Having flown over 160 different aircraft types, perhaps the most unique are the Perlan and the SolarStratos he is now test flying.

Miguel will have achieved record heights in both sailplane and power plane mode, with pressurization coming from a sealed cabin in Perlan and from a Russian-designed pressure suit in the SolarStratos. Both types of flights will share temperatures below -40° F or C (both identical at that temperature).

Miguel helmed the first flight of the re-designed and rebuilt SolarStratos on July 23.  The organization reports on the early morning flight.  “The aircraft soared effortlessly on its elegant new wings equipped with winglets at 800 meters (2,625 feet) above the Payerne aerodrome for twenty minutes before touching down again.” 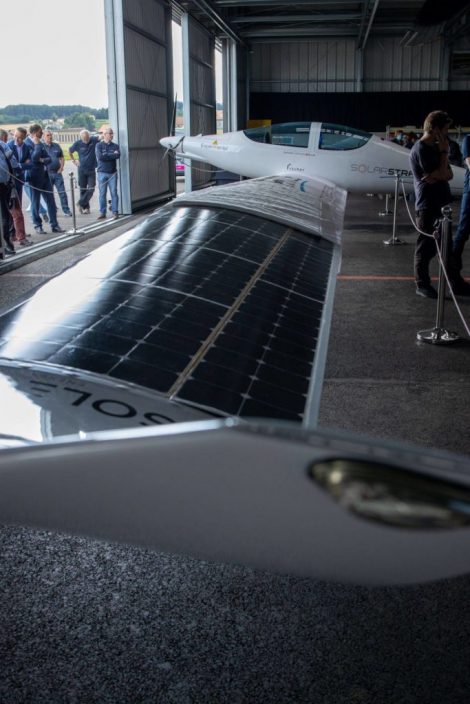 Its new wings and wingtips catching the light, SolarStratos awaits the full light of the sun

Raphael Domjan expressed happiness with the results.  ““The plane is more stable and reliable than during our first round of test flights. Today we are beginning a new chapter that will allow us to reach extraordinary goals, to make the public dream and to convey a positive message on the potential of solar energy to fight climate change.”  Miguel and As flight testing continues, we will continue to report on the team’s progress.

Your editor as delighted to see a true pioneer in solar-powered craft counted as a member of the SolarStratos team.

Fred To was the first solar airplane designer, successfully designing and flying Solar One in late 1978.  SolarStratos, considerably advanced technologically, has the benefit of much better solar cells, batteries and motors than were available to Fred.

Fred reflects, “These are exciting times; from the humble beginnings in the 1970’s solar powered flight has come a long way. The pioneering spirit and dedication of Raphaël Domjan and team is now raising solar powered flight to a new and important level. I wish Solarstratos every success in this challenge.”  From the inspired inception of the concept Fred To gave us in 1978 to the sophisticated platform Raphael Domjan is using to explore extreme altitudes, it all seems of a wondrous thread tying past, present, and future together.