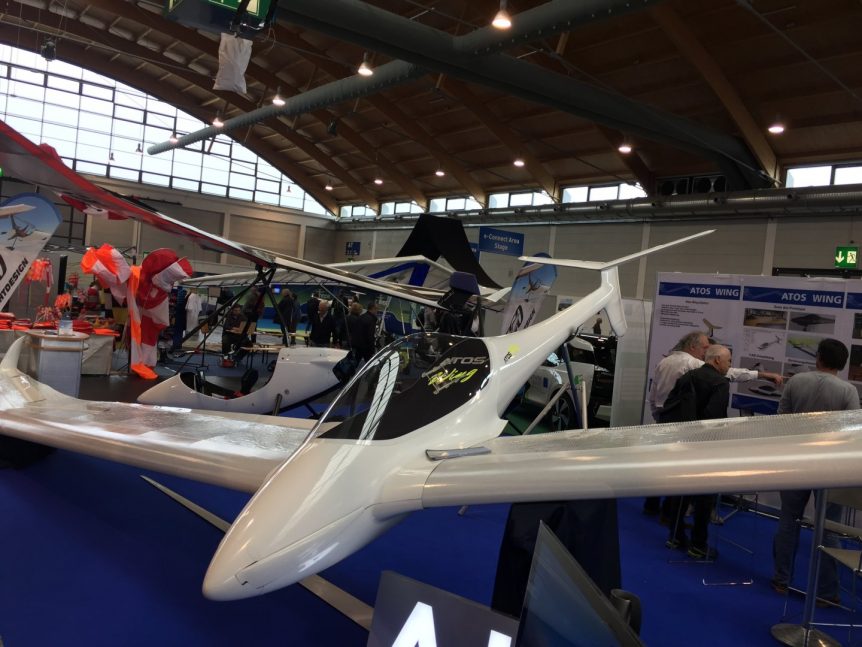 Even following Boxing Day, we have a few items to re-gift to our faithful readers, and close out the season with four very light examples of electric aviation.

Felix Ruhle has been improving and refining a basic wing design for over a decade, growing a line of aircraft that range from simple hang-gliders to fairly sleek, self-launching, electrically-powered ultralight sailplanes.  The A-I-R factory/showroom in Halblech, Germany, one of 18 dealerships around the world, fronts a lush green meadow and houses a plethora of ATOS wings.

The ATOS wing, coming in a range of sizes, can be attached to seemingly anything from a simple jump-off-the-nearest cliff hang-gliding rig to refined, electrically-powered ultralight sailplanes.

Under development for the last few years, the ultralight sailplane merits even A-I-R’s enthusiastic approval.  “The newest development of A.I.R. is revolutionary! The foldable electric powered. nearly noiseless ultralight-aircraft is based on the proven Atos hang-gliding wings! With 3-axes-steering, real elevator, retractable landing gear and propeller, as well as a sleek closed cockpit you will enjoy to expand your cross country flights. It can be easily transported on car or in a trailer and built up by one man in approximately 15 minutes like a hang-glider.”

Falling in the 120 kilogram (264.6 pounds) empty weight that allows unregulated flight, the wing is derived from the rigid wing hang glider Atos, and has flaps, spoilers and airbrakes.  Its 14.5-meter (47.6-feet) wing gives a best glide ratio of 1:28 at 75 kilometers per hour (46.6 mph), very close to what older standard-class sailplanes could manage.  A sink rate of only 0.65 meters per second (128 feet per minute) means it can float on the lightest thermal.  It can carry up to a 110 kilogram (242.5 pound) pilot, a good load-bearing ability.

A-I-R recommends the craft for, “Experienced hang-gliding XC-pilots who want to make longer tracks with thermal[s] and the warranty to come back home!”   With an endurance of up to four hours and a range of 320 to 480 kilometers (200 to 300 miles), pilots can wander a long way from home.  The firm adds the plane is right for, “Glider pilots who prefer independence combined with the safety of a self launching glider and a favorable price!”

The ATOS looks to be an ideal craft for those seeking adventures without the need to drag all of ones friends and relatives along for the ride.

The 2011 NASA Green Flight Challenge had a promised field of a baker’s dozen entrants, although only four made the starting line.  It was a challenge, after all.  One that almost showed was the eQuickie, an electric variant of Burt Rutan’s little speedster.  An unfortunate hard landing damaged the canard’s landing gear and kept the little gem from competing.

And now, almost 10 years later, two rebirths of the idea come to light – one, from Ukraine and chief designer Yuri Yakovlev.

Aeroprakt, a successful light sport aircraft maker with over 900 examples of its high-visibility Vixens and Foxbats flying, was started by a young Yuri, who crafted a Rutan Quickie look-alike powered by an inverted two-stroke, two-cylinder engine.  After a 29 year hiatus, Yuri brought the plane back to life with an electric power plant and a six-blade propeller.  Interestingly, the blades are arrayed in two rows of three each.  A video that includes other electric aircraft switches to coverage of the electric Quickie at 1:46.  It provides interesting close-ups of batteries, propeller and motor.  YouTube has yet to provide translations, but the pictures are universally understandable.

Another video gives a glimpse of ground testing.

And another lets us follow the first takeoff and hurried landing.

To see more, check out this Facebook page, but remember to click the “translate” prompt unless you read Ukranian.

Equally surprising, your editor discovered that Henry Hallam, part of Joby Aviation’s motor development team, had resurrected a Quickie, installed an Emrax motor, his own silicon carbide (SiC) controller, and as an apparent part of that controller, a propeller that can be literally reversed.

He shows a holiday-festive set of battery packs here.  “First three packs complete(ish). Each is 12s4p Sanyo NCR18650GA, monitored/balanced by an LTC6804-1. N22QE will have 27 packs total for 15.2 kWh @ 235 Wh/kg. This will give about 75 mins flight time.”  His honest energy per kilogram at the pack level is greatly appreciated.

Accompanying this video, his notes help make sense of the sights and sounds.  “The QuickLi (or Quick-E) is a single-seat electric self-launching motorglider. Based on the Rutan Quickie (Q1) airframe with an Emrax 208 motor (~40 kW takeoff, ~12 kW cruise) and a Catto fixed-pitch composite propeller. The motor is driven by a DIY inverter design using silicon carbide MOSFETs at 99.6% efficiency. Battery packs based on NCR18650GA cells store a total of 15 kWh at a packaged energy density of 233 Wh/kg. The electrical powertrain is designed with a semi-redundant fail-safe architecture that allows safe flight to be completed after failure of any component including battery or inverter, yet all components are used during normal operation to maximize efficiency (no hot spares).”

And Something (Almost) Lighter than Air

French company Voliris set out to win a Guinness award as the world’s smallest airship, and proudly displays the evidence of their success at the end.

Finally, something meditative and serene.  Aerosculpture blends art and technology into items of great beauty.   The firm, based in Montebourg, France, almost due south across the English Channel from Portsmouth, England, hopes to reinvigorate balloon flight in a center once part of that history.

We hope they can succeed, and bring a quiet joy to the skies over France.