With Tesla now promising 90-second battery swaps, a “recharging” tactic first tried by Shai Agassi’s A Better Place, an Israeli company now in bankruptcy, the long recharging period for electric vehicles may be overcome.  Car companies, though, are not the only entities looking for ways to get unplugged. 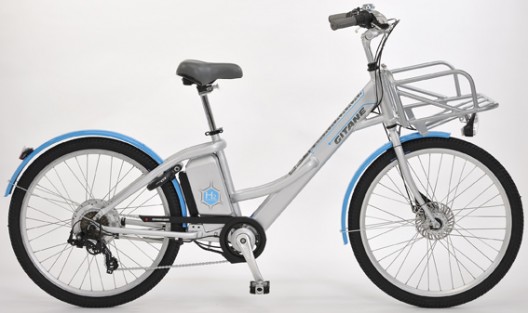 They tout the advantages of this different approach to electrifying two-wheelers – an approach that seems to have applications even in electric flight.

“No more charging time, no need to plug your bike into an electrical outlet! The Alter Bike uses hydrogen in a fuel cell: an existing technology in some cars, it can create electricity while emitting only H2O, in other words water.”

“Refueling” looks like changing an oil filter on a car, twisting a small metal canister from its mount and replacing the spent H2 cartridge with a new one.  One needs only carry additional cartridges filled with hydrogen-bearing metal hydrides to extend the electric bicycle’s range, or stop at a shop that carries the cartridges.  The cartridges can be refilled and reused multiple times. 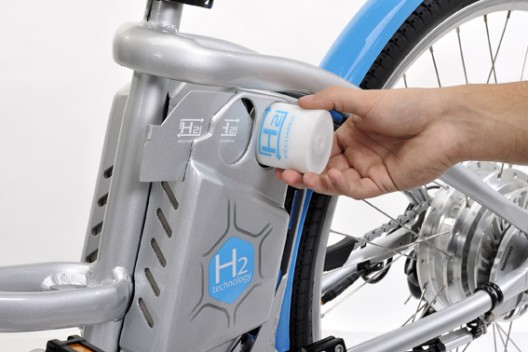 More mileage for the Gitane fuel cell bicycle, looking much like an oil filter

To develop such fuel cell vehicles, those in collaboration have had to cook up a number of interesting technological solutions, including “a new breed of hydrogen fuel cells, hydrogen chemical storage in recyclable canisters, as well as hybrid electronic architecture balancing power needs between the Li-ion battery and the hydrogen fuel cell.”

The battery management system (BMS)/motor controller system probably has some interesting protocols, balancing not only the lithium-ion batteries and feeding their energy to the motor but integrating the fuel cell’s contribution.

CycleEurope will rent the bikes at first, with retail sales starting sometime in 2016.

Technical details are not abundant in the companies’ press release, but a similar effort in Hawaii using fuel-cell-powered scooters gives some idea of the energy needed to store enough hydrogen in canister form to power a vehicle.

Their video and other documentation show that a one-kilowatt solar photovoltaic array can make the 98 grams of hydrogen needed to drive each scooter 50 miles. The hydrogen is stored safely at low pressure in metal hydride canisters allowing for easy canister swapping in less than two minutes. The 20 Hawaiian scooters use eight “convenient locations for canister swapping.

Because solar power is used to generate the hydrogen all is impeccably green, something not possible when using non-renewable fossil fuels for such generation.  The fact that it takes 5 kilowatt hours of electricity to drive a 200-pound (estimated) scooter and rider enables one to make rough calculations about how much energy will be required to make enough H2 to drive a 5,000 pound Tesla S sedan or a 2,600 pound Pipistrel Panthera.

Aviation may yet go through the process of being inspired by bicycle (and scooter) technology as it finds its way into a green future.