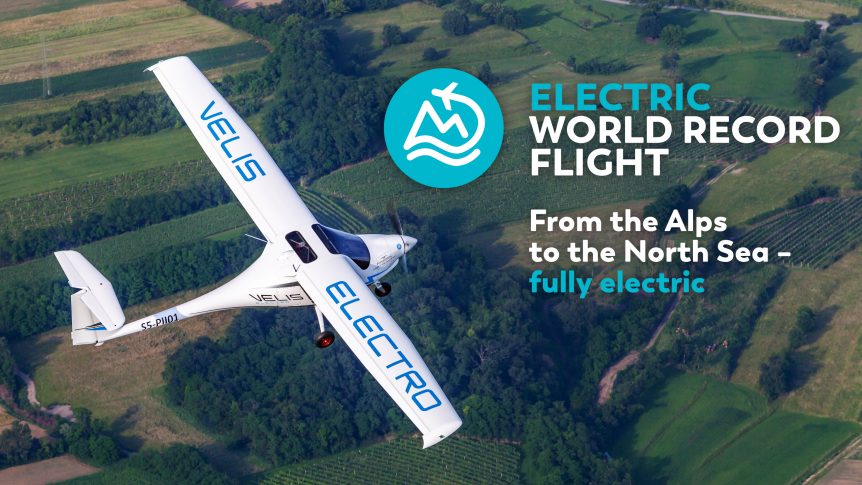 We’re still early in attempts to set world records with electric airplanes.  Jean-Luc Soullier, a friend of the blog, held many of them a decade ago, flying a little Colomban MC-30, an ultralight designed by one of Concorde’s engineers.  At the other end of the size scale, Solar Impulse set many records on its globe-girdling treks.  Now, a five-member mostly German team hopes to set seven world records “in one fell swoop” as they electrically traverse 700 kilometers (435 miles) between the Schanis, Switzerland airport and Norderney Airport on Germany’s North Sea.

The five have interesting professional lives beyond their love of flight.  “Futurologist Morell Westermann, Swiss pilot Marco Buholzer, the Norderneyer brewer Tobi Pape, the video and music producer Tom Albrecht and the podcaster Malik Aziz, who founded the association ‘Friends of Electric Mobility’ want to start on August 31,” according to Electric-Flight.eu.  They will fly Pipistrel’s recently certified Velis Electro.  The team adds, “Above all, we want to prove its suitability for everyday use. That is why we do not fly prototypes specially designed for such record missions that only work under laboratory conditions. 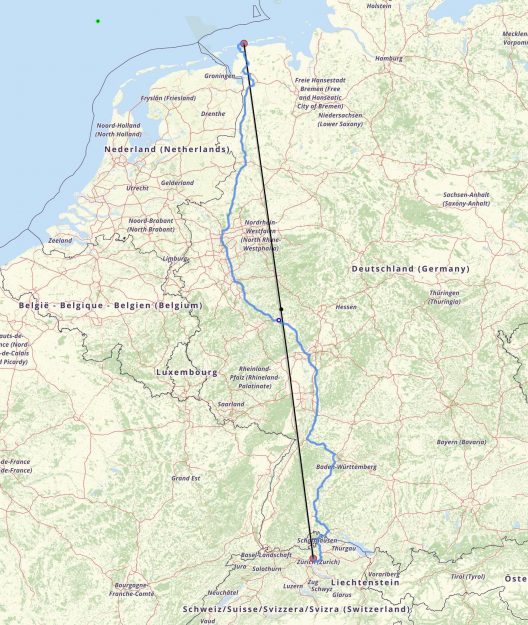 They hope to achieve their records during the planned three-day flight, including:

The team’s Velis, based at the Schanis, Switzerland airport (LSZX), will make a three-day flight of the 700 kilometers.   That’s an average of only 144.6 miles per day, which may not seem all that adventurous.  Flying a light airplane over the Alps certainly counts, and finding chargers along the way adds to the venture.

Comparing This to a Nissan Leaf’s Trip

Only 8 years ago, your editor wrote about Tony Williams, a then unemployed airline pilot who drove his daughter from Baja, California to Victoria, B. C. in his Nissan Leaf for a relative’s wedding. Early editions of that car managed around 100 to 125 miles on a charge, so Tony counted on the still-under-development network of charging stations along the I-5 to ensure that stops would be productive.  Today, motels, restaurants, gas stations, and Kohl and Walgreen’s parking lots have chargers.

Tony Williams’ Baja to B.C. Nissan Leaf was highly recognizable on its journey up the I-5

The sparseness of charging stations meant Tony had to plan carefully.  Similarly, our Swiss pilots will need to be prepared for a paucity of airports with the necessary support gear.

Overcoming the obstacles of terrain, aircraft range limitations (not too different from the 2012 Leaf) and relative lack of airport accommodations for electric craft today, the crew hopes to prove five big points.

“Climate friendly, quiet and a little bit crazy” (their words)

The partners compare their adventure to that of Charles Lindbergh, who managed a solo flight across the Atlantic in 1927, winning the $25,000 (about $370,000 today) Orteig Prize, the largest such award up to that time.  The partners, however, have calculated they will have to pungle up between 50,000 and 80,000 euros to pull off their expedition.  Part of that will finance their application for the Guinness World Records acknowledgements.  Here your editor thought the Guinness folks showed up with plaques and medals when someone did something noteworthy.  It turns out they have to be lured to the scene and rewarded themselves.  Needless to say, they are looking for willing funders.

“Flying is not necessarily harmful to the climate”

Pilot Marco Buholzer explains the grander goal.  “Flying with kerosene is extremely harmful to the climate. Aviation currently accounts for around five percent of the global warming, and the trend is increasing. The emissions at high altitude are a particular problem that arise from air traffic. We want to show that there are alternatives, even if we don’t manage the whole route in one go, CO₂-neutral flying is already possible today!”

Brewer Tobi Pape adds, “Most small planes fly distances shorter than 200 kilometres anyway, you could do that electrically.

Marco emphasizes, “On August 30th we will prove with our extraordinary flight that the time of electric planes has come.”  The landing is scheduled for September 1st.

The blog will follow this adventure and those playing at home can track the flight beginning August 30 here or here.  Stay tuned.