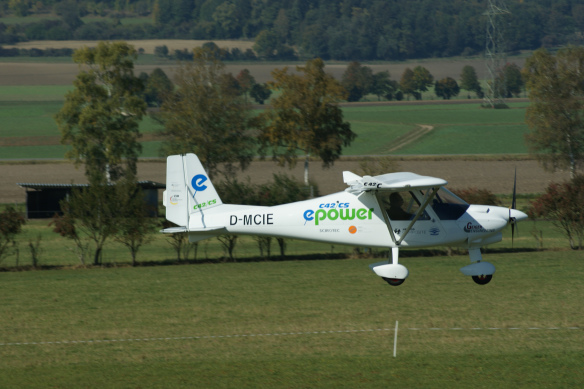 The Comco Ikarus C42 is a popular ultralight aircraft in Europe, now being tested with a unique hybrid power system.

Anton (Toni) Roth was an early adapter, putting small electric motors on a variety of ultralight aircraft over the past several years.  These have been the lightest of machines powered by Eck/Geiger motors, controllers and batteries.

His latest is a hybrid conversion of the popular C42, two-seat ultralight which normally flies on a Rotax engine, as do most European ultralight craft.  In this case, Roth has mounted a Swiss single-cylinder four-stroke engine behind the pilot’s seats driving a Geiger generator which in turn powers a Geiger HP-55D motor on the nose, delivering up to 73 kilowatts (97 horsepower) and providing a rate of climb of five to six meters per second (584 to 1181 feet per minute) – an impressive performance for small aircraft. 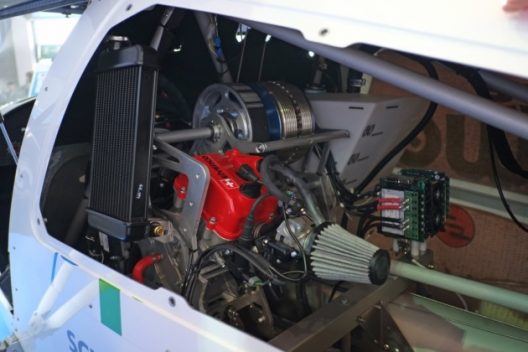 The engine, sipping a mere five liters (1.32 U. S. gallons) per hour, enables the generator to deliver a constant 30 kilowatts. At least partly because of its abstemious character, the motor allows long endurance even at ultralight regulated fuel quantities.  Along with an electric variable-pitch propeller that Roth hopes to test soon, the company has a goal of remaining aloft for at least five hours.

Roth and his team tested several different two-stroke and four-stroke engines before settling on the current unit from Swiss engine company Helvenco.  The single-cylinder engine produced at the company in Burgdorf near Bern displaces 250 cc and weighs only 36 kilograms (80 pounds).  The video below is in German, although most of it is highly understandable overall.  Parts of it have the ambient sound of the powerplants in operation, although much of the natural sound is obscured by music such that one expects Shaft to be flying the airplane.  Please, manufacturers, give us actual sounds, not funk.

Comco Ikarus has sold over 1,400 of the CS42 models in all configurations, so the hybrid option may have a significant market, especially in Europe.  It’s lighter than U. S. equivalents, helping its climb and cruise.  Any machine that can carry two at around 100 mph for five hours would definitely find favor with the economy-minded who wish to explore the world outside airport boundaries.